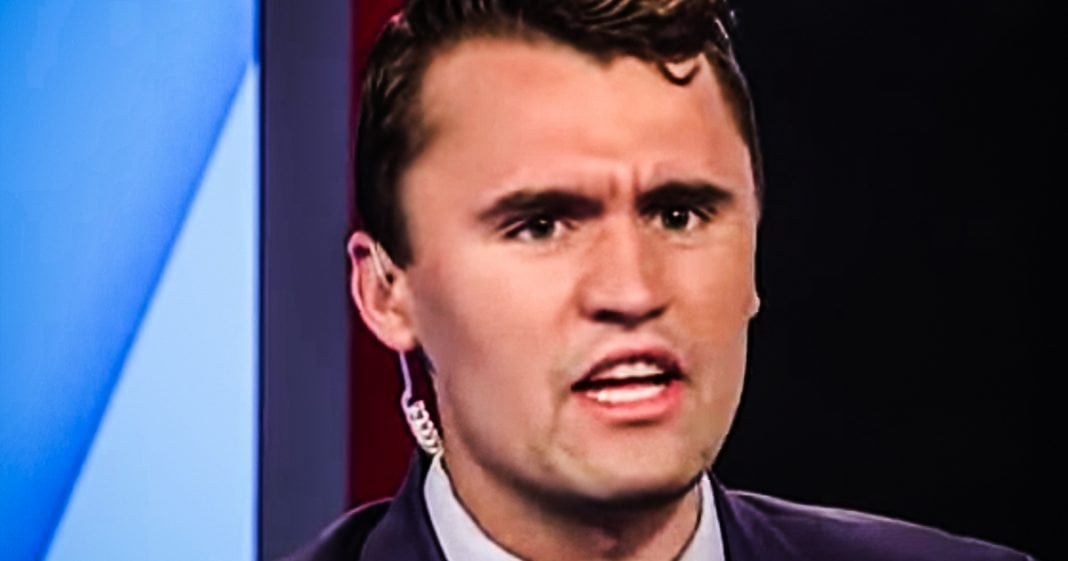 Charlie Kirk is an avid supporter of Donald Trump, and that’s perfectly fine for an individual citizen to express their beliefs. The problem that Kirk has is that his organization, Turning Point USA, is a non-profit that is expressly forbidden from engaging in any form of partisan politics, yet that is exactly what Kirk has been doing with his group. This is illegal, as reporting from Sludge indicates. Ring of Fire’s Farron Cousins explains what’s happening.

*This transcript was generated by a third-party transcription software company, so please excuse any typos.
Charlie Kirk, the right wing president of turning point USA is an avid Trump supporter and that’s totally fine for an individual United States citizen to support whatever political candidate that they want. The problem is Charlie Kirk has repeatedly blurred the lines between his personal life and his personal political beliefs with his 5O1C3 nonprofit tax exempt organization turning point USA. And according to a brilliant new report from Alex Kotch writing for sludge, it’s pretty obvious that Charlie Kirk is breaking the law with turning point USA by actively advocating for Donald Trump and against democratic candidates. A Kotch points out from the IRS itself for their organizations to remain tax exempt under section 5O1C3 leaders cannot make partisan comments in official organization publications or at official functions of the organization. And just a few days ago, turning point USA hosted a multiple day black leadership conference or a black leadership summit, excuse me. And during that time, Charlie Kirk took a photograph with the right wing comedian, a, um, uh, Terrance Williams along with Benny Johnson, took a picture of all three of them were Charlie Kirk by the way, looked super uncomfortable. But then he said the committee to reelect president Trump. This was at the official turning point sponsored event committee to reelect Donald Trump. And yeah, he sent it from his own account, but he wasn’t a private citizen at that point. He was the leader of that particular conference and that’s not the only event that happened at that conference. They also played a, a pro Trump video and he and Candace Owens, who’s no longer with TP USA, but was at the conference attacked Joe Biden, attacked Elizabeth Warren and attacked Beto O’Rourke. They engaged illegally according to the IRS in partisan politics. So here’s the thing, and I know this gets a little bit confusing for people, but a Kotch over at sludge did a phenomenal job of just basically saying what the IRS says. Here it is under the internal revenue code all section 5O1C3 organizations are absolutely prohibited from directly or indirectly participating in or intervening in any political campaign on behalf of or an opposition to any candidate for elective public office. Public statements of position, verbal or written made on behalf of the organization in favor of or in opposition to any candidate for public office clearly violate the prohibition against political campaign activity. argo, Charlie Kirk turning point USA are very clearly and very obviously and very blatantly violating these IRS guidelines for 5O1C3 organizations 5O1C3 means that this group doesn’t have to pay taxes. They’re getting all kinds of money from right-wing billionaires like foster freeze. Um, the home Depot co-founder Bernie Marcus foundation, they’re throwing tons of money at this. Uh, the document show that in 2017 alone, this group turning point pulled in more than $8 million. They’re pulling in a ton of cash here, folks, and they’re not having to pay any taxes on it. And Charlie Kirk is using this as his own little personal piggy bank while also going out there and breaking the law by advocating for and against certain politicians. This is pretty cut and dry. We don’t need a massive investigation into what’s going on here because Charlie Kirk is not smart enough to not put this on his own personal Twitter feed. He’s given us all of the evidence that we need, and yet I guarantee you in this particular instance, unless we get some kind of big massive public outcry, the IRS is going to pretend like they don’t know any of this is happening because God forbid they investigate a conservative organization. Then all hell’s gonna break loose and Republican land where their once again going to accuse the IRS of targeting conservatives, even though those conservatives are very clearly breaking the law.