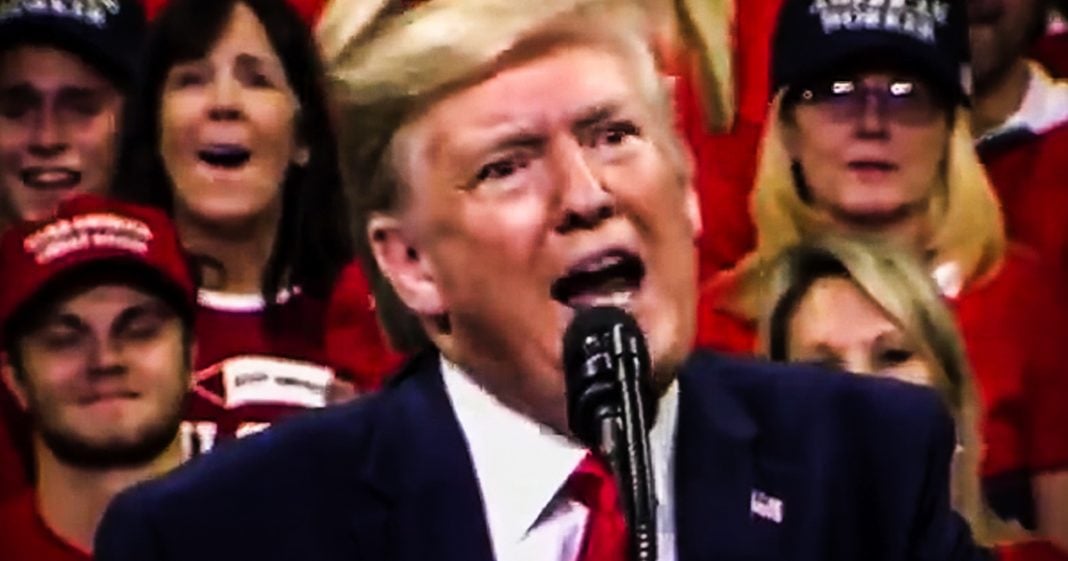 Donald Trump wasn’t afraid to show the world that he might truly be insane during his rally in Minnesota on Thursday evening. Whether it was impersonating Peter Strzok having intimate relations with Lisa Page, or his decision to call Hunter Biden a “loser,” the President proved beyond a doubt that he isn’t fit to hold his current job. Ring of Fire’s Farron Cousins discusses this.

*This transcript was generated by a third-party transcription software company, so please excuse any typos.
Donald Trump has given a lot of disgusting rallies in this country in front of a lot of truly disgusting human beings. But what happened last night in Minnesota was by far one of the most disgusting and psychotic rallies that the president of the United States has ever held. Let’s start at the beginning. Donald Trump talking about, uh, Peter Struck and Lisa Page, those two people who he swears are part of a deep state coup to get him removed from office. Here is how Donald Trump re-enacted that little event. If you can stomach it. Here it is.
[I love you, Peter. I love you too. Lisa, Lisa, Lisa, Lisa, Oh God, I love you Lisa. And if she doesn’t win, Lisa, we’ve got an insurance policy. Lisa who get that son of a bitch out.]
The man is psychotic. Absolutely. 100% mentally unwell, mentally unfit to hold the job that he currently holds. That is what that little diatribe told me. It also told me a lot about those people standing in that audience. Disgusting, despicable, deplorable human beings and I am not going to be nice about that. I am not going to sugarcoat it. I’m not going to say that they were just in the wrong place at the wrong time. The history books are going to show those people’s faces along with Donald Trump’s behind him in those rallies. The same way we look at those Nazi rallies from the forties that is what those people will be remembered by. Their children and their grandchildren are going to look in a history book and see their disgusting little faces peeking out from behind Donald Trump at these rallies. And yeah, I’m pissed off right now folks. And it gets so much worse than just Donald Trump’s little, uh, orgasmic impression of Peter Struck. And here’s where it got worse.
[Where’s Hunter located? Get, get us, where is Hunter. I want to see Hunter se- Hunter. You know nothing about energy. You know nothing about ya. You know nothing about anything. Frankly. Hunter, you’re a loser. Why didn’t you get one point $5 billion Hunter?].
Hunter is a loser according to Donald Trump who’s own children. Every one of them who is prominent with the Trump family, not Tiffany or Barren, but all the other ones are all currently under investigation folks. But Hunter Biden is the loser. Now, I don’t like Joe Biden. I don’t want Joe Biden to be the nominee. And I think what happened with his son and Ukraine is something we need to kind of look at, at least with the, you know, little bit of impartiality, find out what happened. But Hunter Biden has never once been accused of ever doing anything wrong. It’s Joe Biden who may have had a little bit of quid pro quo, but Hunter Biden, Nope. That that’s how that worked. But to call Hunter Biden a loser at a campaign rally in front of those disgusting human beings. Kids aren’t off limits. Not anymore. Not anymore, no. This changed. This changed the game, folks. That’s what just happened right here. Everything is different now. There is no, when they go low, we go high. Now, I’m not a fan of the Biden family, as I said, but I’m sitting here forced to defend this guy in front of Trump who’s own kids. Again they’re under investigation for running a fraudulent charity, potential bank fraud under investigation for shotty housing deals. They’ve been called out by the city of Chicago for not paying their frigging taxes. The list goes on and on and on. Uh, Eric and Don jr hiring illegal immigrants, and then once the heat gets turned up, firing them all, Ivanka Trump getting all those trademarks from China while serving in her official capacity at the white house. Those kids are losers. Those kids are scumbags. Those kids are criminals, and let’s not be nice about it anymore. Let’s call a spade a spade. If Donald Trump is going to go fight this way, then we’ve got to fight the same way in order to have a chance to defeat him.