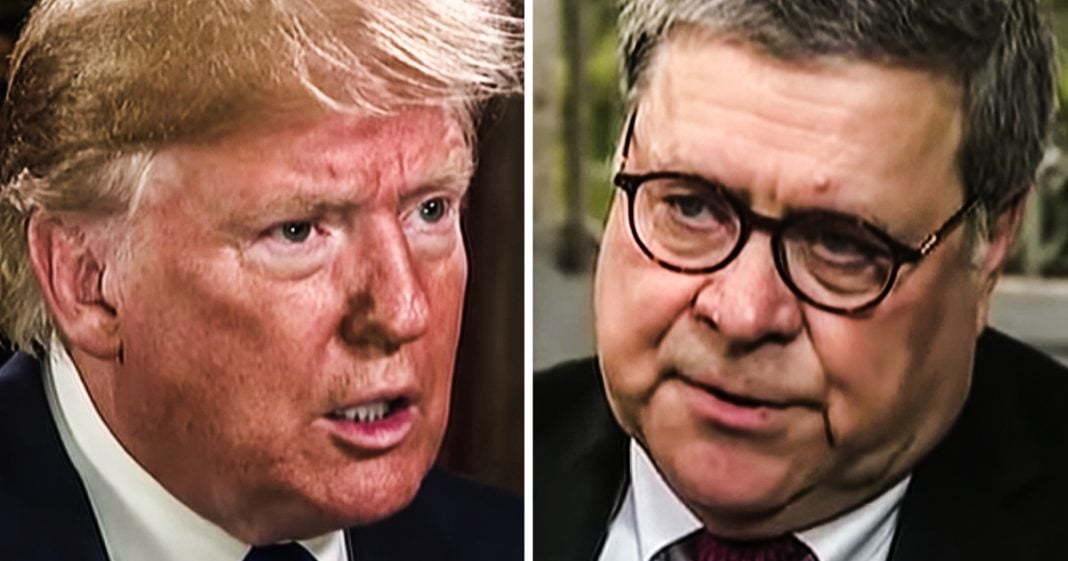 Donald Trump and his 2020 campaign leaders are not happy with the latest round of Fox News polling that shows a majority supporting his impeachment, along with a rising disapproval rating. And in the midst of all of this, Attorney General William Barr met secretly with News Corp owner Rupert Murdoch in New York, for reasons that have yet to be revealed. Is there collusion taking place between the administration and Fox News? That’s nearly certain, as Ring of Fire’s Farron Cousins explains.

*This transcript was generated by a third-party transcription software company, so please excuse any typos.
At this point, folks, it’s been weeks since Donald Trump has had any kind of poll numbers come out that have been good for him. And in fact with each roughly 36 hours, I’d say that passes a new poll comes out showing just how bad things are for the president of the United States in a couple of days ago was no difference. We got that wonderful Fox news poll showing that 51% of respondents said yes. He said he should be impeached and yes he should be removed. Impeached and removed. Not impeached. Then may be removed, impeached and removed 51% according to a new Fox news poll. It also showed him with a 55% disapproval rating. And obviously as Trump does, he got very upset. Fox news is supposed to be in his back pocket. Those are his buddies as her, as friends. Why would they even commission this poll, let alone report on it when it had such horrible results. So Trump takes to Twitter, says your pollster sucks, parts of your network suck that a Nepal Platano fellow you got. He’s awful. Cause he’d call in from my impeachment, but something behind the scenes was happening at the same time too, because while Trump was online railing about this poll, his attorney general William Barr was meeting secretly with Rupert Murdoch. Oh, what’s all that about? Why would the attorney general of the United States need to speak to a media mogul who runs the most pro Trump network in this country? That makes no sense whatsoever. I mean, sure, maybe they’re their old friends, maybe. Maybe they were just catching up. Maybe they bumped into each other on the street and decided, Hey, let’s go hang out for a little bit. I haven’t talked to you in a spell except none of that is how this went down. The attorney general made the trip up to New York to specifically meet with Rupert Murdoch, and the question is why? And unfortunately, as of right now, we don’t have a why. We don’t know. We can only speculate, but I think it’s pretty obvious what’s happening. The attorney general of the United States, William Barr, is not an attorney by any stretch of the imagination anymore. He is Donald Trump’s fixer. He has become the new Michael Cohen and likely will suffer the same fate as the real Michael Cohen, but what he’s trying to do is fix things. He is trying to go talk to Rupert Murdoch and tell him to get his network in line, get people in line, get your polls in line in stop reporting, bad damaging negative things about the president of the United States and even possibly telling Rupert what he should be telling his network to cover. Instead, maybe focus more on Joe Biden. Maybe you start calling out Elizabeth Warren, maybe talk about Bernie Sanders and how horrible all those people are, but stop talking about all the horrible things with Donald Trump. Problem is, however, Rupert Murdoch doesn’t necessarily have the same kind of pull at Fox news as he used to. It’s now his son Laughlin, who was kind of calling the shots there. So maybe maybe something will happen from this William Barr meeting with Rupert Murdoch. Maybe it won’t. Maybe we’ll find out the truth of what it was all about and maybe we won’t. But the bottom line is that the attorney general cannot be trusted in any capacity today. Not at all. He isn’t an impartial attorney. He isn’t trying to enforce the laws of this nation. He is trying to do everything he can to protect the president of the United States. And if Donald Trump is impeached, William Barr needs to be the next to go through that.