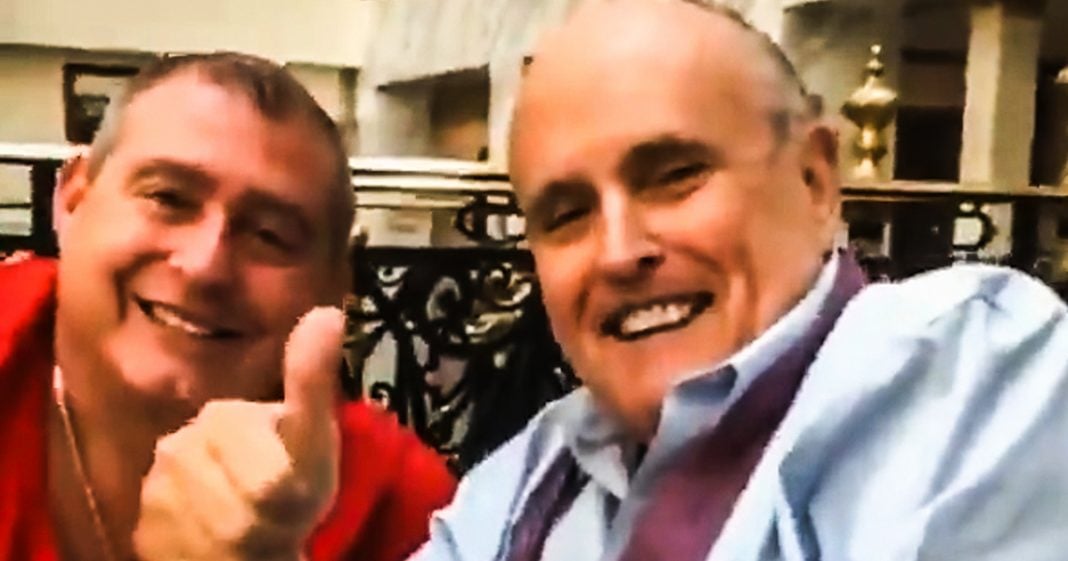 Rudy Giuliani is in a world of hurt right now after his buddies from the Ukraine were arrested on Wednesday evening, just hours after dining with Rudy at Trump’s DC hotel. This story is getting so much worse for this administration as each day passes, and now it looks like it could rope in many of the Republican Party’s heaviest hitters. Ring of Fire’s Farron Cousins discusses this.

*This transcript was generated by a third-party transcription software company, so please excuse any typos.
Well folks, Rudy Giuliani seems to be in a little bit of trouble these days after his buddies were arrested on Wednesday evening at Dulles international airport with one way tickets, trying to get the hell out of the country. And this happened just a few hours after these two friends of Rudy Giuliani had dinner with Rudy at Donald Trump’s C hotel. Um, there is a video going around of Rudy Giuliani with these two, uh, alleged criminals. It was not from the lunch that day, but it’s just the guys palling around a few days before that. Here it is.
[I’m Moisha wish I could. Here with Rudy, congratulations. And I do actually, I love that picture. You’re like, can’t wait to come back and see you in Ukraine soon and have cohesive West places that will hit. I love you.]
Dang. They look like they’re having a lot of fun, right? Talking about Ukraine and doing all these crazy things. You know, just a couple of boys being boys doing crimes like the boys tend to do. Uh, here’s the thing. These two associates are arrested on campaign finance charges. They were funneling money to a lot of different Republicans, including Donald Trump approach Trump super pack that they gave $325,000 to which actually came from a fake energy company that they had set up. This is where these charges come from. Uh, they also gave money to a Republican representative Pete sessions, Republican house, minority leader, Kevin McCarthy and Florida governor. Ronda Santas got $50,000 from these criminals, but that’s the small potatoes part, right? We see donors go down all the time and the, sorry little Republicans have to come out at all. We didn’t know they were so bad. We’re going to donate that money. They gave us to charity because we’re, we’re good people. Not exactly how this was going to work this time, because these two men weren’t just running this fraudulent campaign finance scheme. They were also working with Rudy Giuliani, who was working at the request of Donald Trump to dig up dirt on Joe Biden in the Ukraine. That is what these two men were doing with Rudy Giuliani. They introduced Rudy Giuliani to people over in Ukraine who might be able to help him. They helped to dig up dirt. They are neck deep in this Ukraine scandal and now, so is the president’s lawyer. Look, we already knew Rudy Giuliani was involved in this, right? He’s admitted it. He showed us the text messages, but now he’s also been caught palling around with criminals who we’re supposed to be helping him with this. So these low level thugs, much like the Watergate burglars, when they got busted, that kind of signified the beginning of the end back then isn’t going to signify the same thing today. Is this the beginning of the end? Are these two men who have been, by the way now already subpoenaed by house Democrats? Three different committees have subpoenaed them in the last 48 hours. Um, are they going to sing? Their lawyer says they’ve got lots to tell, but some of it is, you know, kind of protected, you know, so they may not be able to share all the documents they have, but don’t worry. They’re willing to share what they’re allowed to and they’re willing to talk. This is a major development. This is probably the biggest development that we have gotten to date on this scandal. And if the Democrats play it right, they’ve got a slam dunk and at the very least they can likely tie Rudy Giuliani into this. Giuliani is now according to different reports, probably subject to investigation himself. What is his connection to the, to these two men, how were they paying him? How much did they pay him? What exactly were they paying him for? Those are all answers that are going to come out sooner rather than later. And I can promise you not a single one of those answers is going to be good for Rudy Giuliani. His days are numbered and I think he knows that. And the best part is if he wants to save himself, he’s going to have to turn on his client. Will he do it? He’s already probably never going to try another legal case for his life. So what does it matter if he gets disbarred at this point? Right? Rudy, the president’s not going to bend over backwards to save you bud. He’s already trying to distance himself from this scandal, even though he’s in a picture with these two thugs with you in it as well. you better think about flipping because Donald Trump is ready to hurl your ass onto that bus the second he thinks it’s convenient.