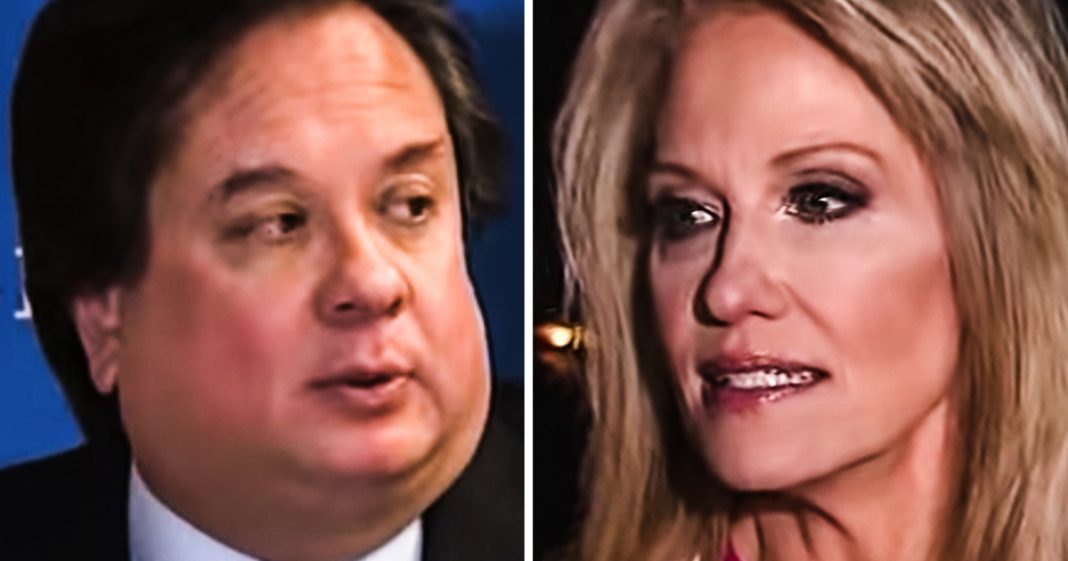 George Conway, the husband of White House counselor Kellyanne Conway, said this week that Trump is impeaching himself at this point with his absolutely ridiculous legal arguments. And he’s correct in his assessment. Trump has never been known to hire the best lawyers, and with his current lead attorney now under investigation, he’s left with virtually no one to defend him. Ring of Fire’s Farron Cousins discusses this.

*This transcript was generated by a third-party transcription software company, so please excuse any typos.
George Conway, conservative lawyer and husband to white house counselor. Kellyanne Conway said earlier this week in an interview with former us attorney Preet Bharara that Donald Trump is actually doing a brilliant job of impeaching himself. Now Conway, George Conway, not the Kellyanne one, was talking about the letter that a Donald Trump’s lawyer, Pat Cipollini sent to the Democrats saying, we’re not going to cooperate in any way whatsoever and this is what Conway had to say about that idiotic letter. He said, the thrust of the letter is that there are some kind of constitutional obligations that the house has failed to meet that therefore render it’s impeachment inquiry, illegitimate and unconstitutional, which is complete nonsense because all the constitution says is that the house has the sole power over impeachment and if you’ve been paying attention to us this week, you know that we have been saying the same thing. The house of representatives can play fast and loose with whatever impeachment role they want to do. They could do it any way they want to do it. They don’t have to play nice with the white house. They don’t have to pay play nice with the minority party. The Republicans can pretty much do whatever the hell they want to do. It’s in the Senate where things get real, where things are more structured, where things have to be completely fair because it does become a courtroom and George Conway being a lawyer, even a conservative one actually understands this. He continues. It’s hard to count the number of ways that this letter is constitutionally and legally garbage. This letter in and of itself is an impeachable offense and he’s actually not wrong about that either. This is a letter spelling out to the house of representatives that even though you have legal authority to do this, we’re not going to comply. We are going to obstruct justice. We’re going to tell our people they’re not allowed to testify and Conway’s right. That’s impeachable. So he is doing a wonderful job of impeaching himself. He is the most incompetent lawyers on this planet. A lawyer, Rudy Giuliani, who now himself is looking at going down for this scandal too, and the criminals he’s been hanging out with. Donald Trump is too stupid to get himself out of this mess, and what’s even better is that he has somehow managed to surround himself with people even dumber than he is, who are more than happy to take him down with them. That’s the beautiful irony of all of this. If Trump had hired any kind of competent lawyer, if he’d hired a guy like George Conway, who, again, I don’t like George Conway, he is a conservative lawyer who wants conservative judges installed across this country to strip us away of our rights, but he’s competent. He knows what he’s talking about. He just doesn’t care about average human beings. Guy like Conway probably could’ve gotten Trump out of this mess, but instead he chose to go with Rudy Giuliani, the worst attorney in the country, and now that’s going to sink this administration even faster than if Giuliani had never been busted. This is great. I love it. I like what George Conway has to say, but trust me, once this administration is over and done with, we can all go back to disliking George Conway for, again, really corrupting the justice system in favor of big business and against consumers. Let’s not lose track of that. This man’s no hero, but occasionally he does call one right about Donald Trump.