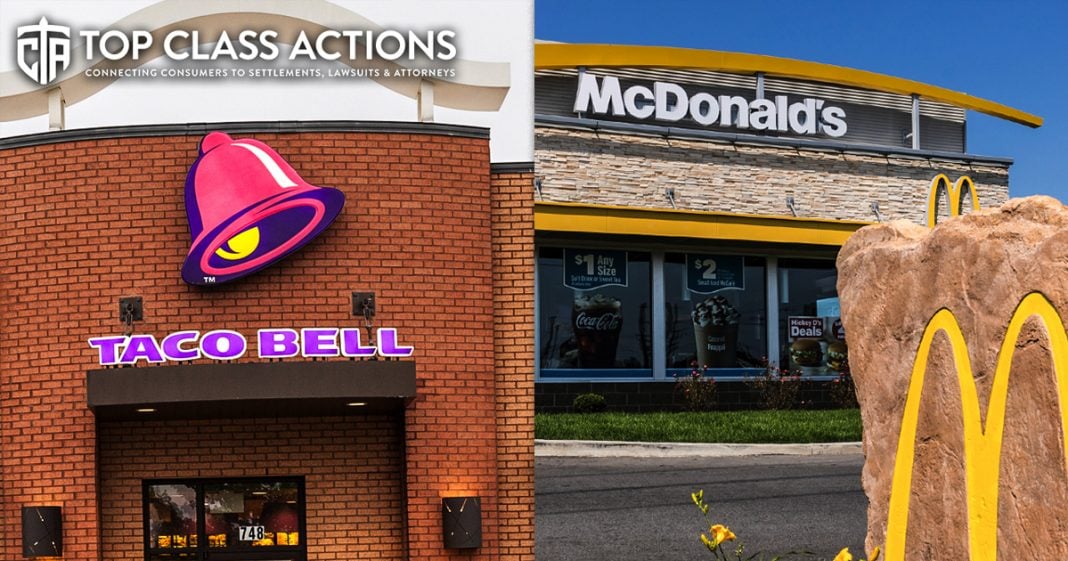 Major fast food giants including McDonald’s and Taco Bell have been accused in lawsuits of overcharging customers for their menu items. The items are marketed on the menu at one price, but then ring up at a much higher price on the register. Ring of Fire’s Farron Cousins discusses this with Scott Hardy from Top Class Actions.

Farron Cousins:                  These days, most fast food companies are trying to outsell their competition by trying to offer consumers the best deal possible. We see it in their advertisements on TV. We see it on their billboards, outside their buildings, you know, whatever it is, it’s cheaper than their competitors. That’s why you should choose us. But according to a new class action lawsuit, a lot of fast food companies may not being completely honest about their prices. And joining me now to talk about this is Scott Hardy with Top Class Actions. And Scott, we’ve got actually two lawsuits here. We’ve got one with Taco Bell, one with McDonald’s. Let’s start with Taco Bell. What’s happening with this one?

Scott Hardy:                          So with Taco Bell, we see their ads on TV all the time. As we all know, especially those in our college days and in high school, right after I got my car, Taco Bell was the go to place to get cheap food that was delicious and we’d count on it. Well, Taco Bell had advertisements saying it was 10 bucks for a, a couple of chalupas. But unfortunately that’s not the case. And we’re used to paying more than we see on TV when we’re eating at one of these fast food places at like an airport. Right?

You know, we know we’re not gonna pay what’s advertised on TV, but if we’re going to our neighborhood fast food restaurant, we fully expect that those prices that are listed on TV are what we’re going to pay when we sit down. In this case, that was not the case. They viewed the commercials. They thought that it was clearly $5 a piece, but no, they actually paid almost $13 for these two chalupas. So they said, that’s not right. You’re advertising these things for five bucks each. Why am I paying more?

Farron Cousins:                  What’s interesting about that too is, you know, a lot of these companies either in their advertisements or, or on their posters on the outside of their windows, it does in very small print on the bottom, say prices where available at participating locations, but you don’t know before walking in if this is a participating location. And you would assume by virtue of the fact that they have that big, you know, peelable sign on their front door, that they’re participating in it. Otherwise, why would you be advertising it if you don’t actually have this price? And that’s a big part of the issue. It’s yes, you have it in your fine print that this place may or may not have it, but if this place is advertising it literally on the side of their building, any reasonable consumer’s going to assume you’re offering me this price.

Farron Cousins:                  And we’ve got another one here too. We’ve got McDonald’s and their Sausage McMuffin getting them in a little bit of trouble with this lawsuit. Tell us what’s happening here.

Scott Hardy:                          So very similar, Sausage McMuffin is on the value menu. You think you could walk in there with a dollar, toss down that dollar bill and get yourself a delicious Sausage McMuffin. But no, those Sausage McMuffins are actually almost $2 and same thing happened. Customer went in there and said, expecting to buy a couple of Sausage McMuffins and put down the money and paid more than he was expecting. Almost double what was advertised. And so once again, you’ve got franchisees that, that are not actually towing the company line and are allegedly, according to the class action, overcharging for their delicious little sausage biscuits of love.

Farron Cousins:                  And what’s interesting about this is that when it comes to these kind of advertisements where they say, hey, you know, the $5 Chalupa Box or the $1 Sausage McMuffin available at participating stores, as long as they have that one store somewhere in the country that is offering this, they can make that claim. But again, we’re running into problems here when you actually walk into the restaurant itself and you see right there on their menu where it has the advertised price, but then when they push the little button on the register, it comes up as a different price. That, that’s why these lawsuits are, are, are there. It’s not because, oh, my place wasn’t participating.

No, no, no. It’s because your store told you it was going to be $1 for a Sausage McMuffin or $5 for a Chalupa Craving and then you know, almost doubled the price in the case of McDonald’s here. That’s where the issues coming from, and again, they can legally claim that yes, it’s only at participating locations, even if it’s one location. But if you’re going to do that, you better make sure that none of these other stores are offering, or advertising I should say, that super low price that they’re not actually gonna give the consumer.

Scott Hardy:                          Exactly. Just be up front with consumers, be honest, and they’ll pay full price. That’s what they want. The, you know, the, they want your product, but you just can’t lie about it. You can’t be deceitful and you have to be really upfront with what you’re charging and how you’re doing it. If you do that, you won’t get hit with these class actions.

Farron Cousins:                  Absolutely. For more information about this issue, follow the links in the description of this video, head over to Top Class Actions and make sure you sign up for their weekly newsletter. Scott Hardy with Top Class Actions. Thank you very much for talking with us today.