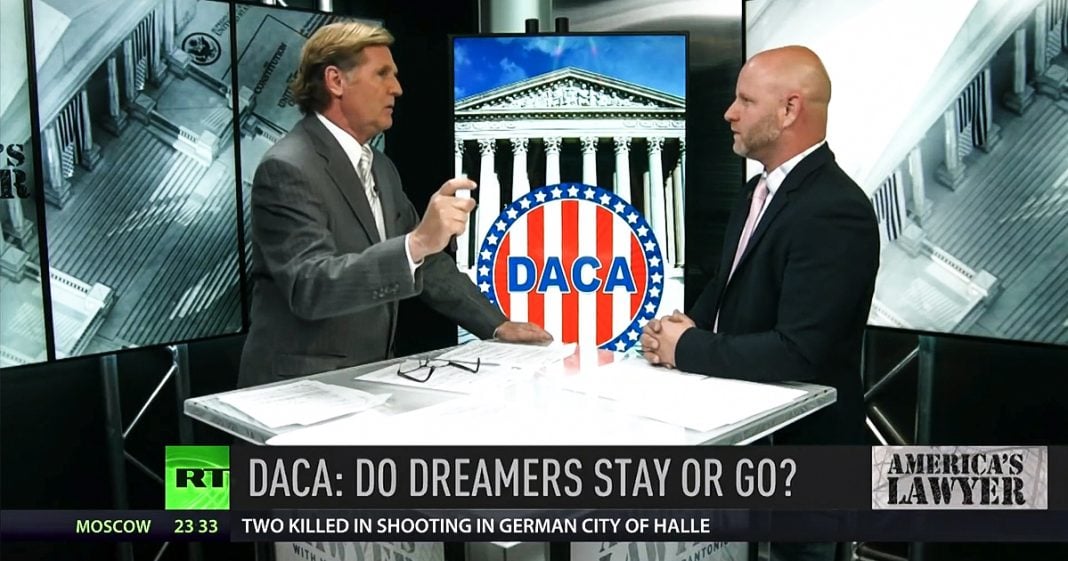 Via America’s Lawyer: Mike Papantonio and Trial Lawyer Magazine editor Farron Cousins walk us through just why so many large corporations are jumping to the defense of DACA, which will be challenged in the Supreme Court this November. Are these corporate bigwigs truly concerned with the welfare of immigrants and their children, or is the Business Roundtable simply trying to protect its own ability to exploit cheap labor?

Mike Papantonio:             The Supreme court will hear arguments in November about the Trump administration’s decision to end DACA protection for children of illegal immigrants and business groups, well, they’re not happy about it, but it isn’t because they love humanity so much. I can promise you that. I have Farron Cousins from the trial lawyer magazine with me to explain why these groups are so chummed up about this. He’s written about it. He knows a lot about this topic. Let’s talk about it Farron.

Farron Cousins:                  Well, you know, this basically, it doesn’t just start with Trump. Actually, this goes all the way back to the Bush administration. Around 2006 the Bush administration was working on a big immigration overhaul. They wanted to get rid of illegal immigrants. They wanted to, you know, really crack down on it because that’s what the Republican base loves to hear. So at that time, the US chamber of commerce came in and, I believe it was Tyson foods.

Farron Cousins:                  They came in with the chamber and said, listen, Bush administration, we, we appreciate what you’re doing here, but we need these people. And so fast forward now 13 years, they’re having to do the same thing with the Trump administration. They’re, you know, they say, look, we understand Mr. Trump. This is what you ran on. You want to, you know, crack down on immigration. But the truth is we have to have these people and we’re the ones who fund a lot of the campaigns on both the left and the right. And this is why nothing ever gets done about immigration.

Mike Papantonio:             Okay. You got these loonies, you got really these loonies that are saying, oh my gosh, isn’t this wonderful? They’re finally showing a, you know, a human side. Let me tell you what’s not human. Let me tell you, it’s anything but human, is the US chamber of commerce and the business roundtable. Now you got to understand those are the people that are saying, now we want to test, we want to test the immigration policy. It doesn’t have anything to do with decency. It has to do with cheap labor, okay. These are the same people. The business roundtable, I’ve got to say, if you attach anything ugly that’s happened in the United States in the last 25 years, you will always see the business roundtable.

Whether it’s the burn down in Washington, I mean burn down in, in, in Wall Street where nobody got prosecuted. Whether it’s a bad environmental movement that’s taken place. Whatever it is, taking advantage of consumers, the pharmaceutical industry, you know, what doing every day what they do and that is to play all the games against the interest of consumers. Anytime you see something really ugly going on, you will always find the business roundtable and the US chamber of commerce. Most people Farron don’t even know what the business roundtable is. Tell us about it.

Farron Cousins:                  Well, this is a group that’s been around since the 70s and they came about from all the corporate leaders, similar to the US chamber of commerce and their, their original goal or at the time their biggest project was we’re going to weaken labor laws. We’re going to get rid of labor unions, we’re going to get rid of labor protections because we want to be able to use it, abuse our employees. They were successful. So the 80s came along and the business roundtable said we’re moving into tax cut territory now. So they got Reagan to extend the tax cuts, the trickle down economics that failed the economy horribly. And then the 90s came along, they were pushing for NAFTA. That was their big goal in the 90s, give us NAFTA.

Mike Papantonio:             And that was so we could go and we could hire cheap labor in places like Mexico and India and China. Now they’re saying, why worry about all that? Bring in cheap labor. So what their focus is just so we don’t get too far and falling in love with these corrupt freaks, the business roundtable and the US chamber of commerce, it’s all about getting unskilled labor to come into the United States where they can pay him $5 an hour or the kind of money that the Tyson foods would pay, paying them to work the chicken farms or whatever it is, factory farming.

Whatever kind of factory farming. They want to move in. They want to take advantage of them and then beyond that they don’t really care. Then the tax payers in the United States have to figure out, okay, how do we deal with this problem? It’s the equivalent of them, it’s equivalent of the passing on those liabilities to taxpayers.

Mike Papantonio:             After they’ve taken advantage of all the advantages from the unskilled labor.

Farron Cousins:                  And what we’ve seen a lot too is that these businesses, they’ll absolutely outright warn their workers, the, these illegal immigrant workers and they say, listen, yeah, we’re, we’re paying you below minimum wage. We’re working you 15 hours a day and not giving you overtime, who are you going to complain to? Because if you go file a complaint, you’re deported. We’ve got you, you know, by the ankles. You can’t go. Just like what we saw recently happened in Mississippi where they raided the meat packing plant. Hundreds of immigrants kicked out and not a thing happened to the owners here.

Mike Papantonio:             Cheap labor, no liability when they get killed, when they get hurt. Let me tell you who the people are behind this movement so you don’t go embracing, oh my God, what a bunch of wonderful folks and we don’t hear this snowflake talk about immigration related as this as something good because corporate America wants it. Goldman Sachs, JP Morgan, Morgan Stanley Citigroup, Bank of America, Boeing. I could go on forever. The people who make all of the military machine work in this lot, in this world. The people who, the people who every, every week we’re seeing another ugly story about them destroying an entire ecosystem with environmental problems.

The very people who caused the burn down on Wall Street where nobody got prosecuted. That’s the people behind this. As a matter of fact, if you look at who their, who their go to people are all the people you would expect. Hank Paulson, Tim Geithner, Larry Summers, Jamie Dimon. Jamie Dimon, by the way, you know, is, is, is now running the, this roundtable, this business roundtable. And every time I hear some announcer on television, corporate media talking about, oh, isn’t this wonderful? This is all about cheap labor.

Mike Papantonio:             They don’t care about these people. Put them in a factory farming situation. If they cut off an arm, send them back to Mexico. That’s their attitude. So that’s what this is really all about.