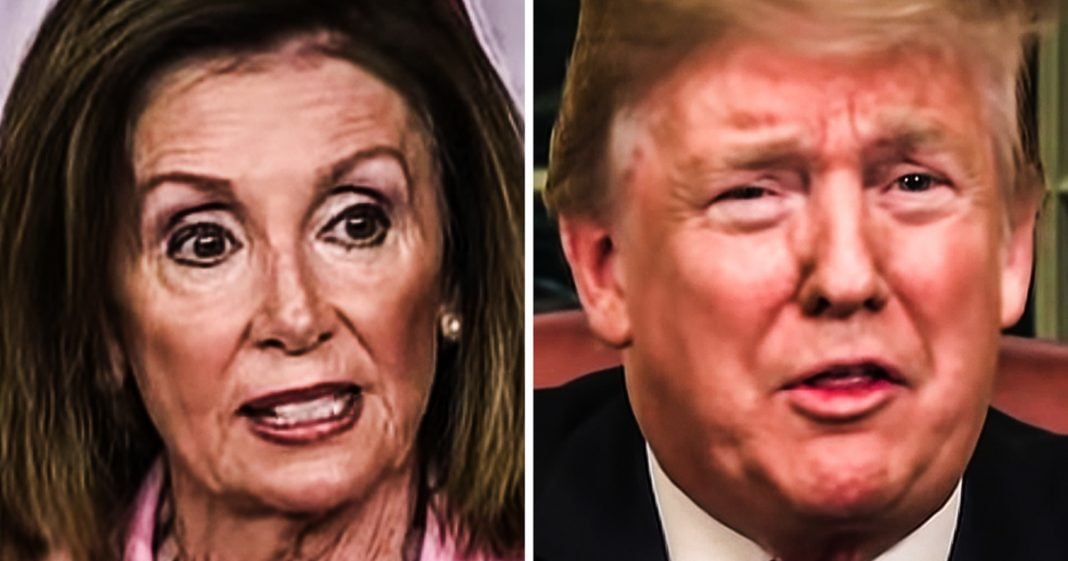 Donald Trump’s attorney Pat Cipollone sent a letter to Nancy Pelosi letting her know that the President and the entire White House will not cooperate in any way with the ongoing impeachment probe. Pelosi and the Democrats are now left with one choice – Start locking them up. They have the power to hold those who don’t comply in contempt, and they need to use that power. Ring of Fire’s Farron Cousins discusses this.

*This transcript was generated by a third-party transcription software company, so please excuse any typos.
Yesterday afternoon, Donald Trump’s attorney, Pat Cipollini sent a letter to Nancy Pelosi letting her know that the white house is going to continue obstructing the impeachment inquiry that the Democrats are pursuing in the house of representatives. Now Cipollini in his letter claim that because Donald Trump released that partial abridged summary transcript and it showed that obviously it was a perfect phone call, but because he did that, there’s no grounds for impeachment. He gave up what he had. They have no reason to continue to cooperate, even though they haven’t cooperated at all. Uh, here’s a direct quote from the letter from Cipollini. He said, put simply, you seek to overturn the results of the 2016 election and deprive the American people of the president. They have freely chosen. He lost the popular vote. Uh, that was the electoral college that chose him. Many Democrats now apparently view impeachment not only as a means to undo the democratic results of the last election, but as a strategy to influence for the next election, which is barely more than a year away. For the foregoing reasons, the president cannot allow your constitutionally illegitimate proceedings to distract him and those in the executive branch from there work on behalf of the American people. Um, okay. Everything that’s Cipollini said in that letter is an absolute lie. These are the talking points that this administration is running with right now and luckily they’re not working. The polls on impeachment are getting worse for the president. By the day, 20% of Republicans support his removal from office already and if they continue using nonsense like this to try to defend the president, those numbers are going to get so much worse very quickly because let’s not forget, folks, we’re only two weeks into this and the numbers have already shifted massively against the president. Imagine where we’ll be two weeks from right now. I have a feeling those numbers are going to continue to get worse, but in the meantime, Republicans like Cipollini are just going to continue telling us, Nope, the Democrats just want to undo the last election. That’s what this is. No, Donald Trump’s partial transcript summary that he released did not highlight a perfect phone call. It showed what the whistleblower said had happened. The text messages that Rudy Giuliani freely gave up on Twitter to the American public, confirm what was in the whistle. Blowers complaint a second whistleblower with firsthand knowledge has come forward corroborating more of the first whistleblower’s complaint. Do we need to go on with those examples? Absolutely not with the impeachment inquiry, absolutely. Because here’s the thing. Yesterday Gordon Somnolent, a US ambassador and also a massive Trump donor who was forbidden from going to speak to the house of representatives. That is obstruction of justice because they specifically told him, no, you can’t do that. So here’s where the Democrats are out right now. House a white house says, we’re not going to help. We’re going to obstruct. We’re not going to let any of our people go and talk to you. Fantastic. It’s time for the Democrats. Go buy big packs of handcuffs if you have to and start arresting people. They absolutely 100% unequivocally have that authority. If you subpoena someone and they do not show up for their house of representatives hearing, you can hold them in contempt. All you gotta do is have the vote, get your majority, hold them in contempt. You send the Sergeant at arms to wherever the hell that person is. You slap handcuffs on them and then you go through them in the little bitty jail in the house of representatives. That’s what happens. And they are forced to stay there under house rules until they agree to testify. It’s that simple and it’s time for Nancy Pelosi to get tough. It’s time for the Democrats to get tough. They are hiding everything about this story and they know it and they’re trying to distract us with these idiotic talking points. Trying to say that, no, you just want to undo the last election. No, we want to get that corrupt moron out of the white house because he is an absolute criminal, It has nothing to do with undoing the 2016 presidential election, and it has everything to do with actually fulfilling Trump’s own promise to finally drain the swamp.