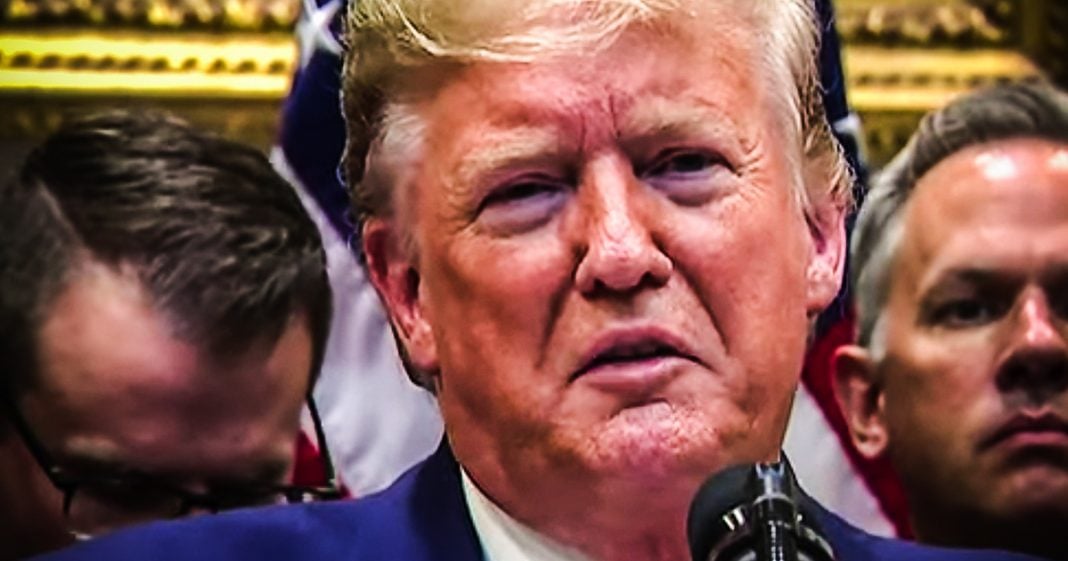 Donald Trump’s administration has seen its fair share of leaks, and these leaks have taken a toll on Trump’s sanity. According to new reports, Trump has repeatedly suggested forcing his staffers to take polygraph tests to find out who the leakers are. The man is losing his grip on reality, and the more paranoid he becomes the more dangerous he becomes. Ring of Fire’s Farron Cousins discusses this.

*This transcript was generated by a third-party transcription software company, so please excuse any typos.
According to a new report by Politico, Donald Trump is obsessed with the thought of giving all of his staffers polygraph tests to find out who is lying about being the leaker and no, not just talking about the whistleblower in the Ukraine story. This is actually according to the report, been happening since pretty much six months in to Donald Trump’s administration. According to four former white house officials who spoke with Politico, Donald Trump ever since about the time he fired Komi and then Mueller got hired to investigate him has been suggesting we need the polygraph. You basically give a lie detector test to everyone in the oval office so I can find out who is leaking all this bad information about me to the press. The he has done this according to them throughout the years. Basically starting around that time though, the comi firing and it’s been nonstop and according to the staffers, the way they get around it is because the staffers all then go to Trump and assure him that, no, no, no, no, no, no, no, no, no, no. This isn’t necessary. We don’t need to do this. We’re all being honest with you in forthright, don’t worry about it. You don’t need to put us under the lie detector two, which the president says, okay, we’re not going to do it. So instead when they suggest a think that somebody is leaking, they pull that person into the oval office. And the official said that Trump just kind of screams at them for a little while trying to break them and see if they’ll confess. And then when they don’t, they dismiss them and they get to go back and do their job. But I have a suggestion for the president of the United States right now. You want to find out who the leaker is. You want to put any person under a polygraph? Start with your good buddy Kellyanne Conway. See, we’ve already had reports proving that Kellyanne Conway likes to speak to the press, but she likes to do it anonymously. Let’s all remember, I think it was that Washington post, a big report on her and her husband where she tried to say something and then later on go back and be like, Oh, that was off the record by the way. And the reporter was like, yeah, but you already said it and she will wasn’t off the record. It was, Oh, make sure you list that as being from an anonymous source. So Kellyanne Conway has literally proven that she does talk to the press under the condition of anonymity. So if I’m Donald Trump and I’ve seen this report from maybe even a year ago, it came out, then I’m thinking, you know what, maybe maybe this woman whose husband hates me so dearly on Twitter, maybe she is the one leaking all this horrible information, or hell, maybe she’s going home telling her husband and he’s making the phone calls to the press. But if you really want to give somebody a polygraph, I would start with Kellyanne because she really seems like the of sneaky devil dirty dealing type. And she has already proven that she does it. But let’s also talk for a second about the fact that polygraphs are unreliable, typically unadmissible in court because they can be so easily manipulated and or give false positives. So even that wouldn’t work for the president. But the bigger picture here is that Donald Trump has growing more and more paranoid. He is afraid of everyone around him. He doesn’t know who he can trust, he doesn’t know whose advice to take. And he doesn’t know what he can say to certain people for fear of them being the leaker. And as we’ve said in the past, the more paranoid this man becomes, the more dangerous he becomes. So as long as people keep leaking, Trump is going to start getting crazier and crazier. The crazier he gets the more leaks that follow and so on and so forth. But keep the leaks coming. Cause at this point, it’s the only way we’re ever going to get the truth about what’s really happening in this administration.