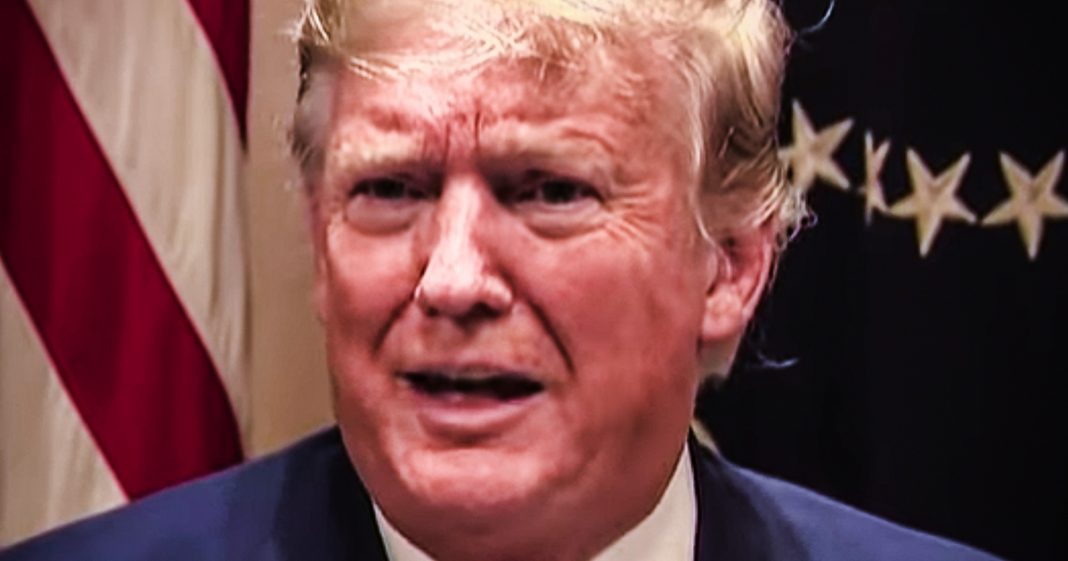 Renowned Harvard psychologist Daniel Gilbert called out not just Donald Trump but the entire country for ignoring Trump’s very obvious mental decline on Twitter early this week, after Trump claimed that he had “great and unmatched wisdom.” The President’s brain is coming apart at the seams, and something must be done about this. Ring of Fire’s Farron Cousins discusses this.

*This transcript was generated by a third-party transcription software company, so please excuse any typos.
So by now, I’m sure everybody saw Donald Trump’s tweet from yesterday defending his decision to, uh, basically abandon our allies. The Kurds over in the middle East. Donald Trump said, as I have stated strongly before, and just to reiterate, if Turkey does anything that I, and my great and unmatched wisdom consider to be off limits, I will totally destroy and obliterate the economy of Turkey I’ve done before. I want everybody to think about that tweet for just a minute. Okay. I know we’ve all had time to kind of digest it over the last, you know, 30 hours. But we need to really stop and think about what this says. A lot of people have been making jokes about it. In my great and unmatched wisdom, I will totally destroy and obliterate the economy of Turkey I’ve done before. Now he does know we’re talking about the country of Turkey and not like an actual Thanksgiving Turkey. I’m sure he’s destroyed plenty of those, but this is nuts. And I’m not the only one who thinks that actually a renowned Harvard psychologist, uh, Daniel Gilbert saw the tweet yesterday and tweeted the following. Am I the only psychologist who finds this claim and this threat truly alarming. Wouldn’t these normally trigger a mental health hold right and left. Must set aside politics and agree that there is a serious problem here and you know what I like about to Gilbert’s tweet here. It’s not just calling out the president, it’s not picking on him. It’s not making fun of him. It’s calling attention to a very serious issue that other prominent psychologists and psychiatrists and mental health professionals have all been warning about for years and then he calls out the rest of us and that’s what needs to happen. He is reminding us, Hey, this is a thing that we need to be taking seriously. These are not the words of a normal human being. There’s something wrong in his head and you left and the right better get your crap together and do something about this. This man is dangerous and the decision that Trump is talking about in the tweet we already know was dangerous because less than 24 hours after he said he was going to pull us troops out of there, Turkey attack, Syria less than 24 hours after he said, we’re not going to protect our allies in Syria. Turkey says, Whoa, here we come. Guns blazing. So yeah, this was a deadly decision on behalf of the president and he responds to it with full blown psychosis, unmatched wisdom. If there is anyone in this country who looks at Donald Trump, it says that this man is wise. I beg you, please go your nearest mental health professional and talk to them and seek help because these are not the words of a normal human being. And so as I have said many times before, sitting right here, how much longer are we going to ignore? Ignore the people who know what they’re talking about. How much longer are we going to ignore the experts, the people who understand and diagnose mental illness, the people who identify it, the people who know and write about and tell us what the warning signs and symptoms are. How long are we going to continue to ignore them? Because at this point, every time we do, it ends in a disaster somewhere on this planet. Donald Trump is mentally on stable, and I don’t know how many more psychologist, psychiatrist, or other mental professionals need to come out and tell us that before we, the public, finally get that through our heads.