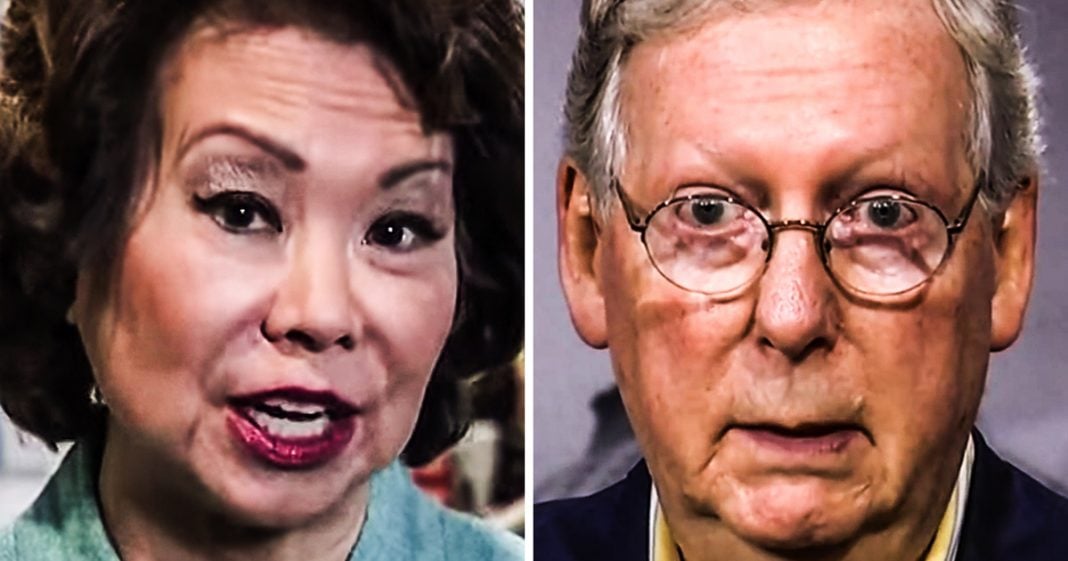 Transportation Secretary Elaine Chao is once again in the hot seat over the latest revelations that 25% of her meetings as Secretary have been with contractors from Kentucky, the state that her husband represents in the Senate. This story, added on to all of the others, paints a very clear picture of a woman abusing her office to enrich her husband, and both of them should be removed immediately. Ring of Fire’s Farron Cousins discusses this.

*This transcript was generated by a third-party transcription software company, so please excuse any typos.
There is absolutely no question. The transportation secretary Elaine Chao is using and abusing her office to enrich her husband, Republican Senate majority leader Mitch McConnell. According to a new report from Politico, between January of 2017 and March of 2018 25% of the meetings that Elaine Chao had with local government officials, 25% of them were with people from Kentucky. The state that Mitch McConnell happens to be representing in the U S Senate. A quarter of the meeting she took during that time period. We’re all about her husband’s home state, which by the way only contains 1.4% of the United States population. So she spent 25% of her time hearing about things that might benefit fewer than 1.4% of American citizens. Now, does that sound like she’s taken her job seriously or does it sound like she’s trying to throw contracts? Huge, huge contracts to the people who are funding her husband’s campaign. Now we already know because reports have already come out in recent months here. The Chao has been steering contracts towards contractors in Kentucky who are giving big money to her husband. This is an abuse of power. This has paid a play and Elaine Chao needs to be held responsible, held uh, accountable for this immediately but not just her Mitch McConnell as well because he is the beneficiary of this. He is the recipient. He is the one who’s getting something more so than anyone else. Even the people get in those contracts because Mitch McConnell is also getting more and more power. The more money he gets and you cannot convince me that this married couple doesn’t go home in the evening and talk about these kinds of things. If Chao was doing this, Mitch McConnell knew about it. He obviously had to have known about it even if they weren’t discussing it because he has eyeballs and he can read the news. This is disgusting behavior happening here folks. And again, it further proves that there’s literally no one in this entire Trump administration that’s not willing to break the law. But what Chao is doing is 100% illegal. And not only is it illegal, it is very obviously completely unfair to the rest of the country. She is not serving as secretary of transportation only for the state of Kentucky. She is the secretary of transportation for every state in this union. But she only seems to care about one. And that’s the one that putting her husband in power, and if she continues this with as aggressive as Democrats are being right now and they have already called for an investigation into her, this isn’t going to end well for her. But more importantly, it’s not going to end well for Mitch McConnell. Cause I’m sure the voters of Kentucky probably love that they’re getting all these fancy new roads and highway projects and all that. But when they find out that they’re getting that by rules being broken in Washington D C that’s probably not gonna sit as well with them. And I hope everybody in Kentucky thinks about that. Every time you drive over those new roads, Oh, it may be nice and smooth, but just remember it’s paved with corruption.