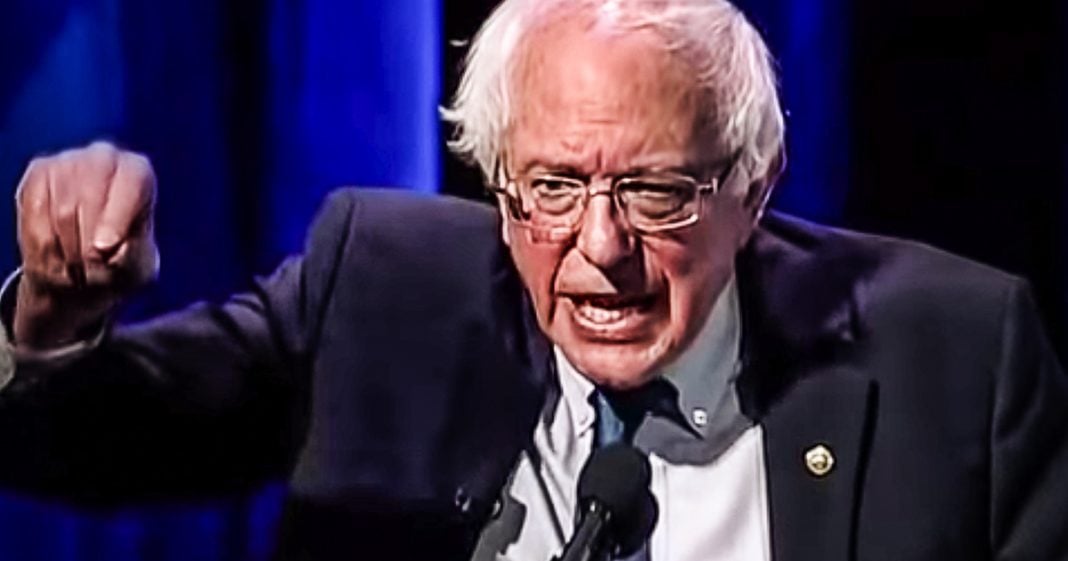 Bernie Sanders unveiled a sweeping new policy proposal for his campaign this week, saying that if he wins the nomination he will ban corporate money and lobbyists from the DNC convention. He also says that he’ll ban corporations and lobbyists from contributing to his inauguration, should he win the election. This is biggest and boldest proposal to purge the Democratic Party of corporate money, and, as Ring of Fire’s Farron Cousins explains, it is absolutely necessary.

*This transcript was generated by a third-party transcription software company, so please excuse any typos.
Bernie Sanders is not playing around when it comes to banning purging corporate money from the democratic party. Now we’ve all known for a very long time. Obviously Bernie Sanders is not taking any corporate money for his campaign. It is all grassroots donors, small donors. Average donation is just a couple bucks and in spite of that, he still managed to have the biggest third quarter haul out of anybody running on the democratic side over $25 million. But that’s not where it ends. Yesterday the Bernie Sanders campaign unveiled a new proposal that would purge corporate and lobbyist money from not just the DNC convention coming up next year in Milwaukee, but also from the inauguration. Should Bernie Sanders go on and take the election? This is big. This is by far one of the biggest corporate money purges. We have seen proposed for the democratic party ever and it’s exactly what’s needed. You know, Elizabeth Warren has taken a lot of heat and rightfully so because she has said she is not taking corporate money, PAC money, lobbyist money during the primary, but she’s also said that’s likely going to change if she makes it to the general. Bernie, on the other hand is saying to hell with it. Not only would I not take it in the general, but the party’s not going to take it. They’re not gonna pay for our inauguration. They’re not going to pay for our convention. We are sending a very clear and concise message to corporate donors that you’re not welcome here. You can’t buy your way into the DNC anymore. Your money cannot come in and corrupt our members the way it has been for decades. We’re done. We are a party of the people, by the people and for the people and that is exactly what needs to happen. Bernie has got a lot of amazing proposals that would essentially change our way of life here in the United States, but this may be my favorite because this isn’t just about helping everybody else. This is about sending a message to everyone in the party. The upper echelon, the elite of the democratic establishment saying, we’re done, folks. We’re changing the way we do business. We’re getting back to our roots and we’re going to be the party of the people. Corporations need not apply. That’s what this is about. So let’s get into some of the specifics. This proposal would insure public financing of federal elections, create a new federal elections oversight board, prohibit advertising during presidential primary debates. Enact a lifetime ban on a lifetime lobbying ban for former members of Congress and top staffers. Um, proposal goes on to ban lobbyist and corporate PAC donations to the, if he’s the democratic presidential nominee it bars, former DNC chairs and vice chairs from lobbying. And it caps the individual contributions to official inauguration committees at $500. He would also seek to pass a constitutional amendment, clarifying that money is not equivalent to speech, and that corporations do not have the legal status of individuals, thereby eliminating key legal justifications for court ruling, striking down campaign finance regulations. Meanwhile, you have a man by the name of Joe Solmanese who happens to be the a DNCs convention CEO who’s already out there making phone calls to corporate donors. Saying I need to raise $70 million for this convention. Oh, and if you’re going to be a high dollar donor, like a six figure donor, we’ll give you a special VIP package and go behind the scenes. You can meet the nominee ah you get special press credentials. Just give us lots and lots of money and we’re going to give you these super cool things in return because they want to treat it like a sporting event. Oh, and by the way, he’s also selling these a box seats. For the convention. Like you’re watching the Superbowl or something. But that’s what it is for these big corporate donors. It’s a game. It’s a game and they hope that their team can win because they’ve got a lot of money riding on that game and Bernie wants to take it out of the game. Bernie is looking at these donors. He’s looking at the DNC and he’s saying, this isn’t how it’s going to be anymore. We have to get the money out of politics. We have to limit the power that lobbyists have, and we as Democrats can’t flip who we are as people once we leave office and go join the ranks of these lobbyists like Howard Dean did when he sold his soul after being a pretty decent progressive now out there arguing against Medicare for all and taking pharmaceutical money. Bernie’s tired of that, and I think so, or a lot of people in the democratic party.