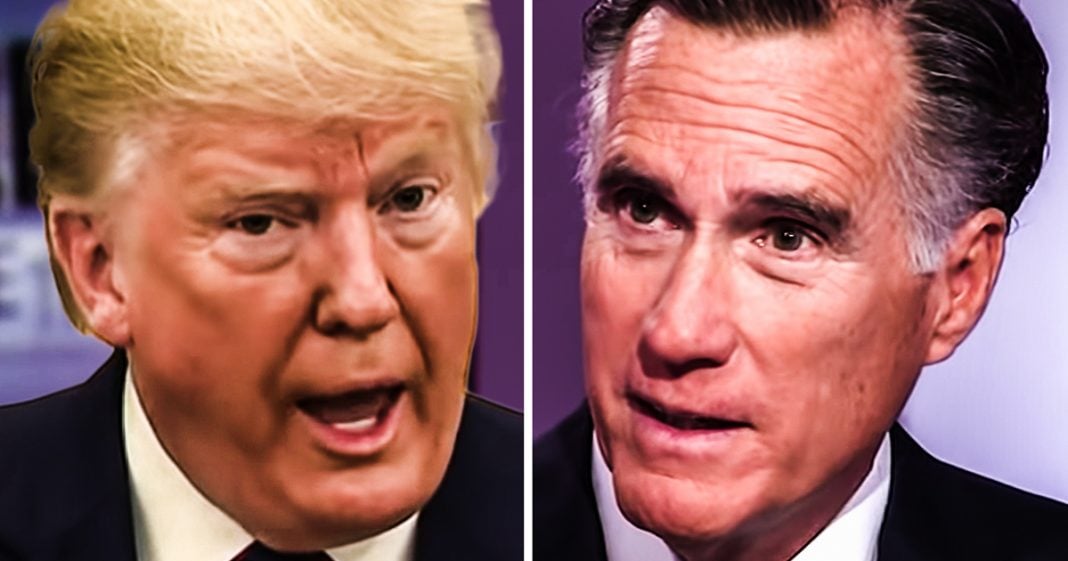 Over the weekend, Donald Trump called for Republican Senator Mitt Romney to be impeached after Romney offered one of the most timid criticisms of the President ever. Trump doesn’t seem to understand how impeachment works, as he also called for Pelosi to be impeached for treason. Ring of Fire’s Farron Cousins explains what’s happening.

*This transcript was generated by a third-party transcription software company, so please excuse any typos.
So Donald Trump spent his weekend having a very public meltdown all over Twitter about all kinds of things, but one of the things that really set him off was that Mitt Romney towards the end of last week, offered the most, uh, polite criticism, I guess you would call it, of the president ever. Mitt Romney had come out and said, well, I mean, if the president did do what this whistleblower say and he did, then it’s very troubling. It’s troubling. you may as well have just told Donald Trump he’s the worst human being on the planet and that you hate his entire family and that his wife is ugly because that would have elicited the same response that Mitt Romney got from the president. Here is what Donald Trump tweeted out in response to. Again, that very polite criticism by Mitt Romney. Trump said, I’m hearing that the great people of Utah are considering their vote for their pompous Senator Mitt Romney to be a big mistake. I agree. He is a fool who is playing right into the hands of the do nothing. Democrats hashtag impeach Mitt Romney. Donald Trump created a new hashtag cause he was mad and impeach Mitt Romney, Donald Trump wants Mitt Romney, a United States Senator for the Republican party who will, by the way also be voting on whether or not to convict Donald Trump in the Senate. He wants him impeached. And that’s not even a thing that’s possible. You, you can’t impeach him. That’s not how impeachment, well, you can’t just go around and impeach anybody you want because they want to impeach you. You can be impeached. Other people, yes, they can be removed from office, but it’s not impeachment. And I, honest to God, don’t think the president has the brain capacity to understand the difference between the two. And that’s also terrifying because this man is painfully ignorant about what the law is. And if you think it’s just a joke, him saying impeach Mitt Romney. Okay. Then how about the fact that just a few hours later, he, uh, called for Nancy Pelosi to be impeached. Was he joking then too? Or is he an idiot? Because we all know the answer to that and he’s an idiot. He’s not joking around. He’s not just throwing the word impeachment around. He is saying it because he, honest to God doesn’t know what it means. He doesn’t know what that process is, but again, more importantly than the president just being a brain dead moron is the fact that he just pissed off one of the guys who has to vote for him in the Senate, that that’s not a good strategy. You’re losing friends right now, Donald, and you have to have those friends in order to survive in your job, but if you want to sit there and tweet out videos of them losing presidential elections like you did with Mitt Romney over the weekend and you’ve done in the past with Mitt Romney, then that’s not going to end well for you. After all, let’s not forget Romney’s niece is the chairwoman of the national Republican party. Probably not the kind of guy you want to pick a fight with when you need that party at your back. Now, don’t worry, folks. I have no doubt that Rhonda McDaniel is going to protect the president and say to hell with her uncle because she’s the kind of person who’s going to put party in politics over her own family because that’s just her set of conservative values. But at the end of the day, Trump is pissing off the wrong people, and I couldn’t be happier about that.