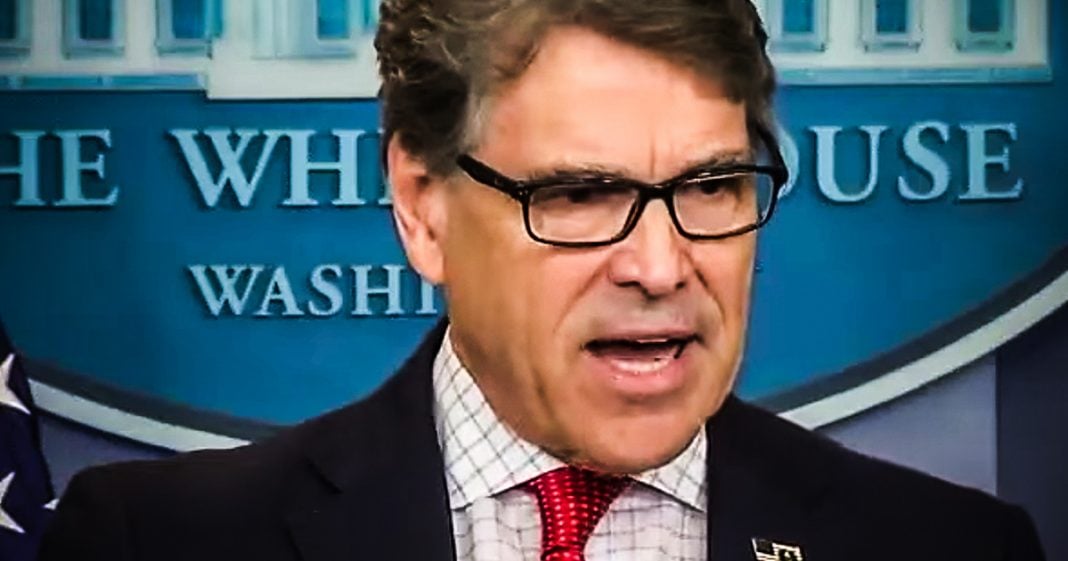 As predicted, Trump is going to take every single member of his administration down with him, and Energy Secretary Rick Perry has become the first person to get thrown under that bus. Trump is now claiming that Perry is the one who made him make the phone call to the President of Ukraine, and that he didn’t even want to make that call. Ring of Fire’s Farron Cousins explains what’s happening.

*This transcript was generated by a third-party transcription software company, so please excuse any typos.
You know, about a week ago, we told you that a, as this investigation into Donald Trump’s Ukraine phone call rolled forward, Trump would throw everyone under the bus in front of him. He would take down this entire administration if he had to in order to pin the blame for this call on someone else. Then late on Friday, he threw the first person under that bus and that person happened to be energy secretary Rick Perry. On Friday on a phone call with Republicans. Donald Trump told them I didn’t even want to make the call. I didn’t want to talk to this Ukrainian president fella. It was Rick Perry who told me to make this call. Rick Perry is the guy that we should all be blaming. Now, you’ll also recall that earlier on Friday reports started coming out that Rick Perry was going to be leaving. Soon Rick Perry was out the door and then suddenly later in the day, Donald Trump says, yeah, it was Rick Perry. He did it. He made me make the call. He’s a bad guy. And then over the weekend we got another report about Rick Perry saying that he had in fact been working with allies of Rudy Giuliani over in the Ukraine, uh, to get some of his friends on the board of an LNG gas company. Huh. So Rick Perry did in fact have some business going on in the Ukraine and he wanted Donald Trump to help grease the wheels a little bit. But nothing in any of these reports suggest that Rick Perry told Donald Trump to bribe Ukraine to investigate the Biden family in exchange for the aide that Congress passed for them. So even if Rick Perry is a bad guy in this story, even if he did try to get his buddies jobs over in Ukraine because he saw that Hunter Biden was making a lot of money, hell, my buddies want to make some money too. That doesn’t absolve president Trump of his crimes either because they’re completely unrelated. It doesn’t matter if Rick Perry was sitting in your office and he dialed the phone for you and held it up to your ear the entire time. Mr. Trump, you were the one who said, I need a favor. Those are the words. I need a favor. That’s what you said, and there’s no amount of people you can throw under the bus that’s going to absolve you from any of this.