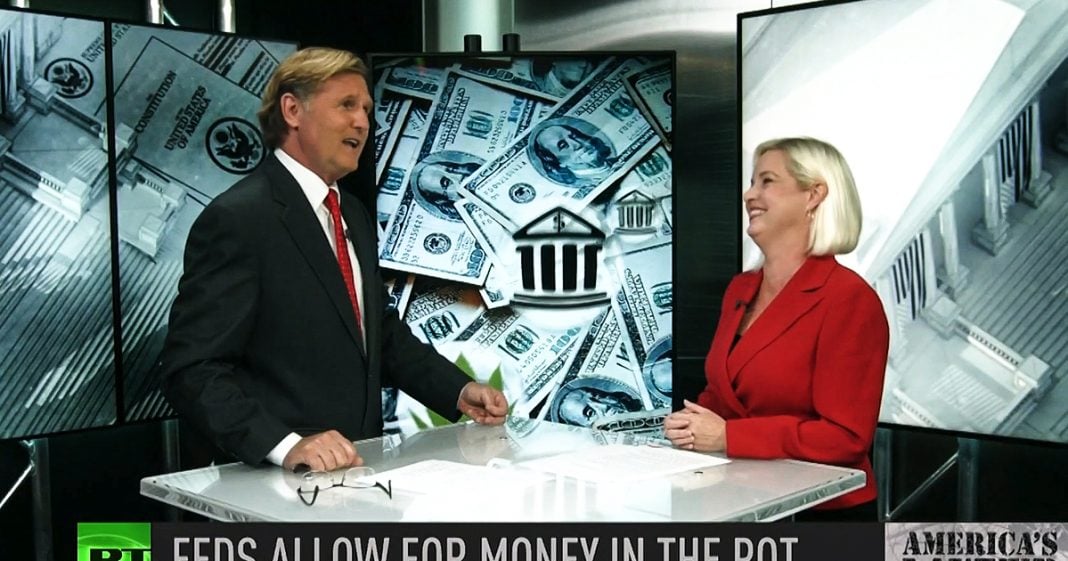 Via America’s Lawyer: Mike Papantonio is joined by legal journalist Mollye Barrows to talk about the Secure and Fair Enforcement (SAFE) Banking Act just passed by the House of Representatives. As legislation moves onward to the Senate, this bill would protect from prosecution those banks that do business with the cannabis industry. Could this be a GIANT step forward for federal marijuana reform?

Mike Papantonio:             In a landmark victory for marijuana reform, the House of Representatives has passed the secure fair enforcement banking act. While the debate over marijuana legalization has flooded state legislators, this banking bills passage could be paving the way for future federal reforms, we hope. Legal journalist Mollye Barrows joins us now to talk about that. Mollye, when, when was this bill introduced and does it seem to be moving at a decent rate?

Mollye Barrows:                It does when, so little moves with bipartisan support in Congress now. This one really has a lot of support. So it was proposed in March and it’s moving right along. The House just passed it recently, in fact, and it was proposed by a Congressman out of Colorado and it’s basically a law, if it’s made law, it will protect any businesses that work with cannabis, it will enable them to be able to work safely with banking institutions and it will keep these banking institutions from being open to prosecution, any kind of criminal prosecution for doing business with them.

Because, as you know, it’s still illegal federally, but we have 33 States and counting plus the district of Columbia that have legalized it for state use and individual use. So this is what it’s meant to do. There is so much money being made and basically Congress is saying, this isn’t about, or the House anyway, this isn’t about marijuana, this is about banking. And these banking institutions are asking for this. So let’s give it to them.

Mike Papantonio:             Full disclosure, as I tell this story, I, I, Charlotte’s web is something that I, I want to a fair amount of. Okay. And so I wanna I want to tell you that the, the, the problem is when a state says we’re going to legalize this and then they don’t have anything that they can do with the money, they’re, everything’s cash.

Mike Papantonio:             Their credit cards are very, there’s some companies that have moved into that space, but it’s not broad enough. How has cannabis industry, how have they been operating without banking’s help?

Mollye Barrows:                You said it, it’s a lot of cash. It’s individual niche businesses that help them problem solve, help them find, find financiers, if you will. Sometimes it’s overseas banks or institutions that are more comfortable with it. Sometimes it’s credit unions or local locally owned banks, state banks that aren’t underneath the same pressures or feeling the same constraints as maybe a national banking institution. So it’s more the individuals.

Mollye Barrows:                I think they finally got support from the Republicans because Democrats have typically been on board with this. They typically have been supportive of marijuana as an alternative for medicinal treatment as well as a business, you know, proposition. And I think finally you’ve got the banking institution as a whole onboard with legalizing this because there’s so much money to be made and that’s where you’re getting the support from the Republicans.

Because they are worried, again, going back to that far right stance of maybe offending some of their more conservative or religious constituents, if you will, who may see something wrong because it’s still illegal federally, but they want to move forward because they see a chance to make it about banking and not about marijuana.

Mike Papantonio:             Yeah. So, so where were these religious conservatives when HSBC raised their right hand and said, yes, we have taken in money from terrorists.

Mike Papantonio:             We knew what we were doing. We understood it was being used to kill American soldiers over in Iraq.

Mike Papantonio:             And we did it anyway, in Afghanistan. And it wasn’t just HSBC, by the way. So, okay, does this, let’s talk, let’s look at this. If it, if this bill passes, doesn’t it also create a trend where more States say, yeah, we’re comfortable legalizing this because the federal government finally has shown some leadership and said, banking can be involved.

Mollye Barrows:                Yes, and I think there’s a lot that’s at stake here. I mean, first of all, we don’t know how well it’s going to do in the Senate, but so far reports indicate that they’re going to green light, that the, the, the fellow from Idaho who is in charge of the Senate banking committee, he said that he is definitely going to move it forward. Their version may not look exactly like the House’s version, but they do want to take it up. You have Marco Rubio saying, well, I may not agree with legalizing marijuana as a whole.

I do agree with basically giving banks the green light to go ahead and control it financially, so that they have some control. So that to me seems to be the heart of it. Whether Rubio meant to say it or not, he was basically saying, we want to put our hands in that cookie jar. By golly, this is how we’re gonna do it.

Mike Papantonio:             Most, yeah still. Well, Rand Paul, what I love to see Rand Paul is libertarian, and he says, look, we’ll let’s, let’s, let’s own up to where this American culture is. Legalize marijuana is a reality.