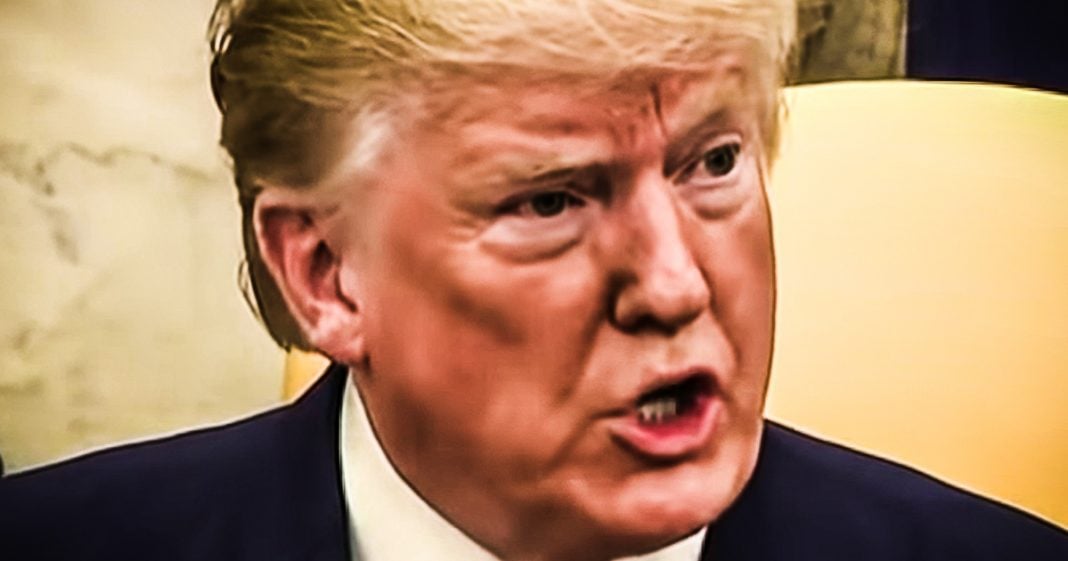 A second whistleblower has come forward to corroborate the claims made in the first whistleblower’s complaint, and the new whistleblower is said to have first-hand knowledge of the account. This blows another major hole in Donald Trump’s defense, and this second whistleblower could soon be joined by others who are also sick of the corruption from the President. Ring of Fire’s Farron Cousins discusses this.

*This transcript was generated by a third-party transcription software company, so please excuse any typos.
One of Donald Trump’s biggest criticisms of the whistleblower complaint that was released a week and a half ago was that this whistleblower didn’t have firsthand knowledge of it. It was all secondhand knowledge. He heard from people who heard what happened. And Donald Trump says, that’s just unreliable. We can’t believe this person whatsoever. Horrible whistleblower, horrible human being probably. And so the lawyer representing this whistleblower, Mark Zaid came out yesterday and said, well, guess what, mr president, I’m also representing a second whistle blower, a second whistleblower, who by the way has firsthand knowledge of these events. so that really blows a big hole in Donald Trump’s biggest defense against the whistleblower, the existence of a second whistleblower who also had spoken to the inspector general, the inspector general, like the first one, deemed these, uh, concerns to be credible. And now this whistleblower is being represented by the same attorney. Now the second whistleblower has not yet communicated with any members of Congress according to the lawyers. So we’ll wait and see what Congress does with this and what this whistleblower has to say to them. But here’s the thing. First we had the one, then we had the second. Is this going to keep going? Are we going to have more whistleblowers? Is this, you know, the snowball rolling down the Hill? That just gets bigger and bigger the more whistleblowers join into it because once they see that one person is willing to stand up and come forward, typically it’s human nature for others to join in when they see the need. Nobody wants to take that first step. It’s scary. You could lose your job, they could retaliate against you or worse but once you do it and other, see that, wow, they did it. I got to do it too. I’m coming forward. So now we have to, how big is it going to grow? How many more can we get after all? According to the first whistle blower, there’s at least half a dozen other members of the intelligence community that that whistleblower spoke to that were present for some of the events mentioned in the complaint. so who knows? Folks, we may have six more as time drags on, but the truth is we don’t even need anymore. We, we really don’t. We have the text messages. We have the text messages from the Trump administration. We have the text messages from Rudy Giuliani because he was kind enough to tweet those out for us. We know that these conversations took place. We know that these officials from the government and Trump’s personal lawyer were acting on his to get Ukraine to investigate Joe Biden in exchange for releasing the aid to the Ukraine. That’s all spelled out in these text messages. So yes, it would be awesome to have a whole Baker’s dozen of whistleblowers come forward, but the truth is we already have pretty much all the evidence we could ever want to show that Donald Trump did in fact break the law. Now, here’s the thing. Last week, pap and I did a segment. A lot of people didn’t seem happy about it, where we talked about the legality of what Donald Trump actually did. We mentioned, by the way, that there doesn’t have to be an explicit crime in order for the president to be impeached. But at the time when that was recorded, which was several days before it was posted, it was not clear which crime the president may have committed. But now, thanks to the, uh, director of the federal election commission, we do know if Donald Trump was attempting to solicit anything for political gain against an opponent in a U S election from a foreign official. That’s the crime. That is the crime that Donald Trump did, allegedly. And that is the crime that he will likely be impeached for. Because at this point, again, we’ve got the evidence. So these whistleblowers are great, but in the end, we may not even need any more whistleblowers because this administration has already given up all of the best evidence we could hope for.