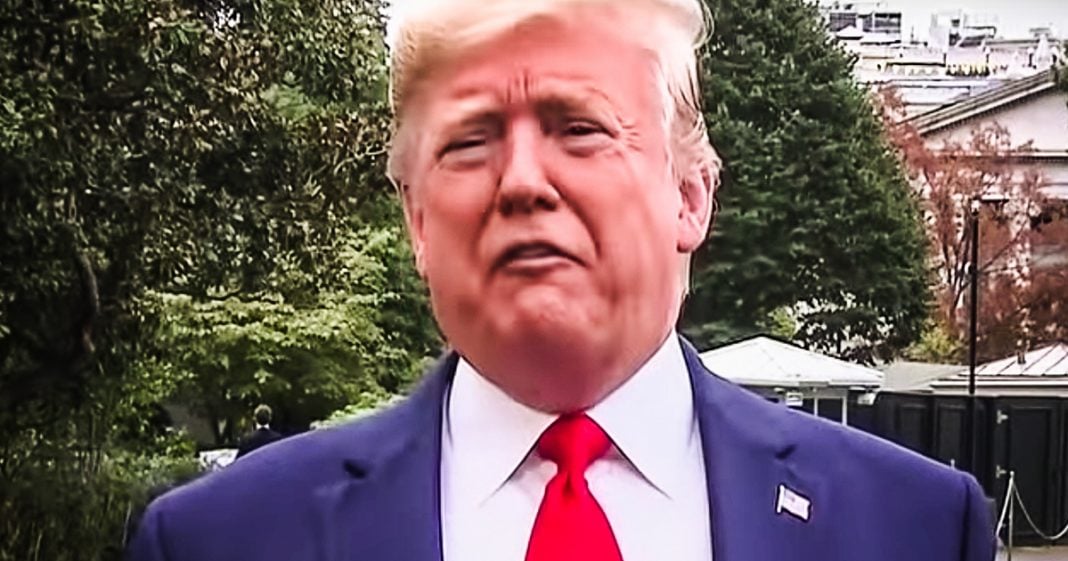 A federal judge has thrown out Donald Trump’s lawsuit trying to block the release of his tax returns to the Manhattan District Attorney, and the judge said that the President MUST turn over those records. Trump promises to appeal, but this is likely a lost cause for the President, as Ring of Fire’s Farron Cousins explains.

*This transcript was generated by a third-party transcription software company, so please excuse any typos.
Early this morning, a federal judge handed down a 75 page ruling that basically told Donald Trump, no, you’re not going to be able to Sue to stop the release of your tax returns to the Manhattan district attorney’s office. Trump’s lawyers, including those at the department of justice who are now somehow acting like Donald Trump’s personal lawyers had filed a lawsuit that we discussed not that long ago, trying to block the release of these tax returns, arguing in court in their filing that Donald Trump as president of the United States is immune from any and all investigations and therefore you cannot request his tax returns. And furthermore, you can’t even investigate them. Well, the judge in this case, again in a 75 page ruling for such a simple matter had this to say, this court cannot endorse such a categorical and limitless assertion of presidential immunity from judicial process. To put it, in other words, hi, there’s three co-equal branches of government. Mr president, your branch does not sit above all of the others. It is in fact equal and also no citizen in the United States regardless of office held is immune from the law. Now for just a little bit of a refresher, this lawsuit was seeking to stop the tax returns from going to Cy Vance up in Manhattan who is investigating the a Trump organization. And Donald Trump himself’s repayment to attorney fixer Michael Cohen, who paid off the, uh, women that Donald Trump had affairs with shortly before the 2016 election. And Mr. Vance wants to find out how’d you write off these payments? Some were made from Trump, some were made through the organization they show up in the organization, but it really looks like you classified them as standard legal fees in your business filings. So we need to get our hands on those tax returns to see if that is in fact what you did because if that is what you did, that is illegal and we’re going to have to go ahead and possibly prosecute somebody at that point. That is what this investigation is seeking to uncover. Now there’s also of course, uh, the little issue of the fact that the U S Congress, the Democrats specifically in Congress, also want to get their hands on Donald Trump’s tax returns. This may or may not help them. I mean, they do now have a ruling that says Donald Trump is not above the law and investigators can get their hands on the tax returns. However, this lawsuit was not against the house Democrats. That one is still pending appeal, but because this is a federal judge who’s ruled this, it could perhaps be used as precedent by other judges to go ahead and say, listen, we’ve already got this ruling. It’s a sound ruling, so we’re going to have to make the same ruling here in Democrats. You can have these tax returns that may or may not happen. We don’t know. Trump has already promised he’s going to appeal this ruling, but it may be for not. Right. I mean, even if he goes all the way to the Supreme court, I know he’s got his buddies up there, but if they can’t determine that anything was incorrect in this specific instance, they’re not going to be able to overturn it. That’s how that works. So Trump’s in trouble. But furthermore, I think all of his supporters out there need to honestly ask themselves if he has nothing to hide in his tax returns, why is he fighting so hard to keep them hidden? That doesn’t make any sense. So ask yourself that question honestly. Ask yourself that question, and you’re probably going to come to the same conclusion, which is there’s probably some information in there that he doesn’t want the public to know about.