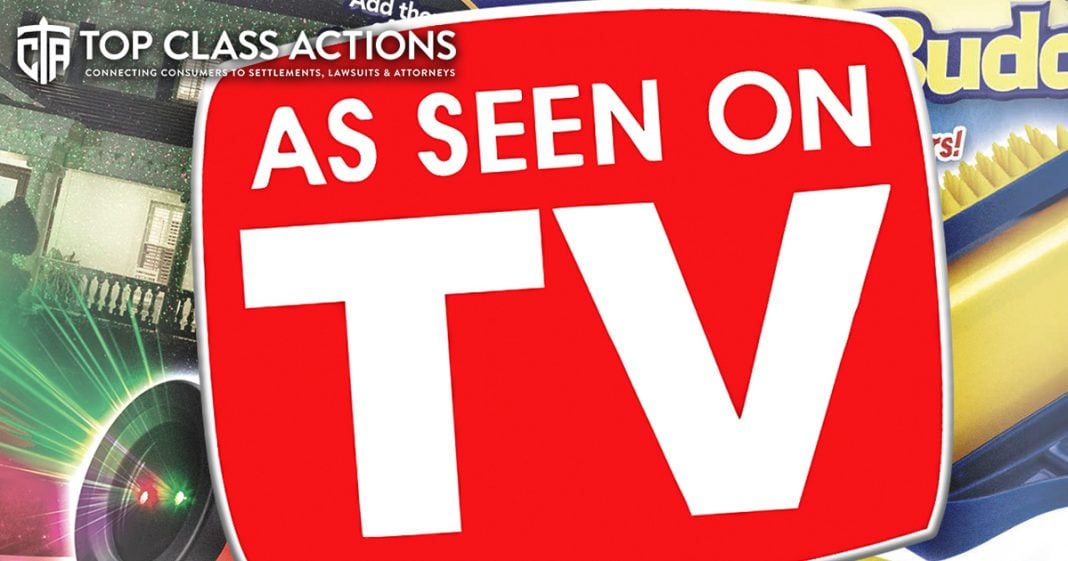 A Missouri woman says she was blindsided by a so-called TeleBrands savings club fee when making a purchase for a scrubber she saw advertised on television. Lead plaintiff Barbara Rosenbloom alleges that the “Everyday Savings” program fee started at $1, then spiked to $14.99 a month. TeleBrands touts itself as “the oldest existing direct response marketing company and the original creator of the ‘As Seen on TV’ logo and category of trade,” according to the TeleBrands class action lawsuit. Ring of Fire’s Farron Cousins discusses this with Scott Hardy from Top Class Actions.

Farron Cousins:                  It seems that everything today kind of comes with some sort of monthly subscription, you know, whether it’s your music service, your book service, your TV packages that you’re buying from eight different providers right now. There’s always these monthly fees and sometimes because that happens, we don’t tend to notice a few of them showing up on our bank statements every month. And that’s exactly what I believe a company called TeleBrands was counting on. TeleBrands is one of the oldest as seen on TV, in fact, they claim to have marketed that term, companies here in the United States.

And joining me now to talk about some of the problems this company is facing is Scott Hardy with Top Class Actions. So Scott, yeah, we’re, we’re getting charged monthly for all kinds of things right now. I mean, it’s, it’s almost impossible to keep track of some of these things and TeleBrands told their customers that, hey, dollar a month, you know, we’re going to send you all these deals, all these exclusive offers and coupons and everything. But then according to the class action, it wasn’t a dollar they were charging. It was basically $15 per month for people who signed up and then said, we’d never got anything worthwhile from the company. Tell us about this one.

Scott Hardy:                          Right, and it’s a very common thing that we see from big corporations is that they get you hooked. They say, hey, just, we’ll charge you a dollar for this. Don’t worry about it. You’re going to see some big benefits. And then a month, two months, three months later, all of a sudden you’re paying $15 a month for something that you won’t ever use. Or in this case, according to this class action doesn’t really exist. It’s just a fee that they’re charging for a product that doesn’t actually give you anything.

And that’s something that these corporations do, especially when it’s TeleBrands and, you know, they’re on TV and they’re selling millions of widgets. If they can get a million people to sign up for that, then they’re breaking in $15 million a month and they’re, for doing nothing. Right? Doing nothing, but they’re raking in that cash. And so I’ll be curious to see how far this class action goes before a settlement is reached and how much it’s actually for.

Because I would love to see the discovery from this case and see how much profit they’re actually making from this program and if they have any way to actually justify it to the judge as an actual valid product that really exists. Because according to this class action, it’s essentially worthless and they’re just hooking people on a promise of these great savings when they buy these products and simply not delivering.

Farron Cousins:                  And, you know, as you pointed out, it would be nice to see the discovery, because we’re looking at it here, this is $14.99 cents per month that these people were charged after being told it was going to be a dollar or at least that was the starting fee. And we see that a lot too. You know, if you’re not reading the fine print, it may say yes, it’s only a dollar for this program for the first three months or for the first week. And then after that we charge you the full price of $14.99. Maybe it’s $20 a month, whatever it is.

And they bury that in again, the super small, tiny fine print that some people can’t even make out and that’s what happens. But they do that to say, no, we warned you. We told you with those super tiny letters that no normal human being would be able to read. We told you right there, you should have known this was coming. You didn’t object to it. So by default you agree to it. And I have a feeling this is probably going to be the kind of argument that TeleBrands adopts in court.

Scott Hardy:                          Exactly. You know, a lot of times we see these arguments from these corporations that simply say, exactly what you did. Hey, we told them about the fee. Whether or not that’s an existing product, whether it actually delivers. That’s not so much as, it’s so important as we told them that it was going to increase. So that’s really sad when you’ve got that approach with your client and your customer and you’re saying, hey, we told you we’re going to jack it up. Did we actually going to give you anything? Nah, but either way you’re screwed. You’re going to be, you know, still being charged this fee and we’re not going to give you anything in return. But we’ll see.

You know, what’s really disconcerting about this is that they were already hit with a lawsuit and in 2011, they already reached a settlement agreement with the Iowa attorney general over this exact thing. Yet here they are still doing it eight years later. And I’m hopeful that this settlement will actually result in a nationwide benefit for everybody who was charged this fee and didn’t get what they were hoping for and ideally stop the practice completely.

Farron Cousins:                  And, you know, one of the things that really needs to happen with this is we basically as a country, as regulators we, we’ve got to abolish fine print. You know, we can’t have it say on page one that yes, it’s a dollar a month then down on page 30 it says, oh, by the way, it’s going to increase to whatever x amount is after x amount of time. No, it has to be clear. It has to be right there. It has to be where people see the $1 right next to the future price. That’s what needs to change, and hopefully as a result of these kinds of class action lawsuits, hopefully that’s what we’re moving toward because as companies continue to do this, they’re going to continue to get popped for it.

And for more information about this issue, please follow the link in the description of this video. Head on over to Top Class Actions and while you’re there, make sure you sign up for their weekly newsletter. Scott Hardy with Top Class Actions. Thank you very much for talking with me today.