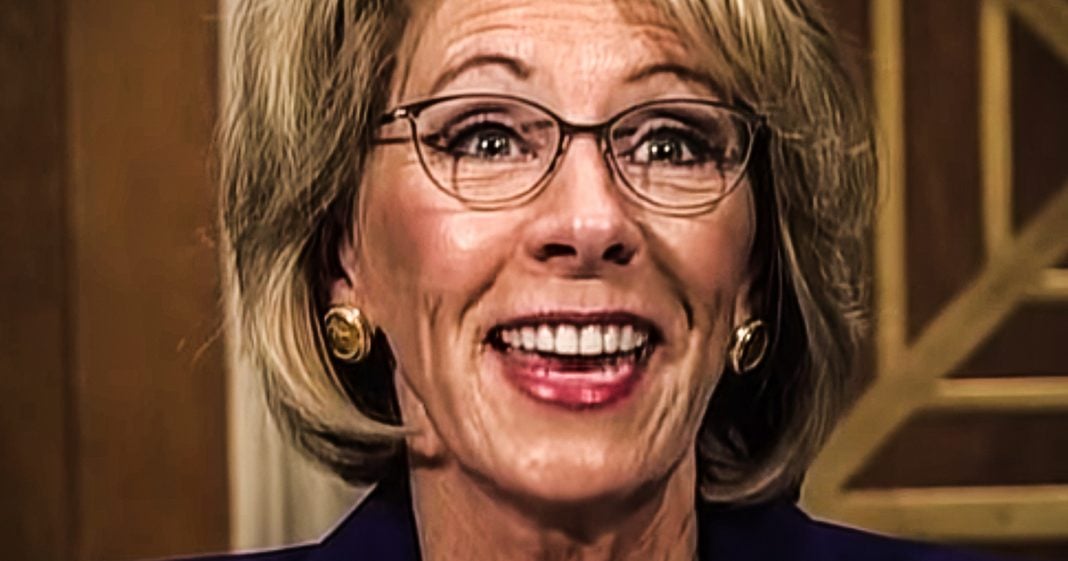 Secretary of Education Betsy DeVos was ordered by a court to stop collecting student loan payments from students who were swindled by Corinthian College, but her department decided to defy the order and collect those debts anyway. She is now in serious trouble, as those former students are arguing in court that DeVos be held in contempt for violating the court order. Ring of Fire’s Farron Cousins discusses this.

*This transcript was generated by a third-party transcription software company, so please excuse any typos.
I am firmly convinced that there is nobody in this entire administration that is not willing to break the law at any given point. The latest example we have of law breaking from the Trump administration comes not from Donald himself, but instead from education secretary Betsy Devoss. According to a new lawsuit against Betsy Devoss, which is actually being heard in court today, may have already had a ruling by now. I haven’t checked my computer in about 30 minutes. Maybe it’s already done with, but Betsy Devoss is facing a, a challenge from a couple thousand students who she wrongfully is garnishing their wages, withholding their tax returns because of their student loan debt. Now again, more than a trillion dollars of student loan debt here in the United States. So why is this a big deal? Well, here’s the big deal. Uh, last month, a judge actually, excuse me, prior to last month, long before that, a federal judge said, Hey, Betsy Devoss and a department of education, you can no longer seek repayment on student loans from borrowers who attended Corinthian college, which went out of business several years ago after they were exposed for being a massive fraud that lied to their students, lied about their job prospects, lied about their graduation rates, lied about everything under the sun, and they also committed securities fraud. Um, so they went out of business and a lot of people were left with tens of thousands of dollars in student loans and a degree that was essentially worthless. So under the rules of the department of education and rulings by judges, these debts were forgiven, didn’t have to repay them. You got swindled. We’re not going to charge you for that. But Betsy Devoss still collecting those debts, even though a judge told her you can’t legally collect these debts anymore. So today, the students, which there’s over 1000 of them that were having their wages garnished or their tax returns withheld to pay off these debts, 16,000 total that were uh, wrongfully being overcharged, but 15,000 of them have been resolved. 1000 plus still out there anyway. They’re arguing in front of a judge that, Hey, she should be held in contempt. The court very clearly said, you can’t do a thing, Betsy Devoss still did the thing. She broke the rule. She broke the law. She has to be held in contempt. There has to be some kind of accountability in this administration for the constant rule breaking and hopefully that’s what happens. Hopefully that is the ruling that we get. Maybe it comes out late this afternoon, may be in a couple days. Who knows? But something has to be done. Somebody in this administration has to be made. An example of, we have seen this far too often, this same show from the Trump administration, whether it’s Betsy Devoss, whether it’s Ben Carson, Palmpeo, Andrew Wheeler, Scott Pruitt before him, all of them, they’re all cheats. They’re all crooks. They’re all doing these underhanded dealings, and it’s time for one of them, at the very least, to finally face some kind of consequence for their action.