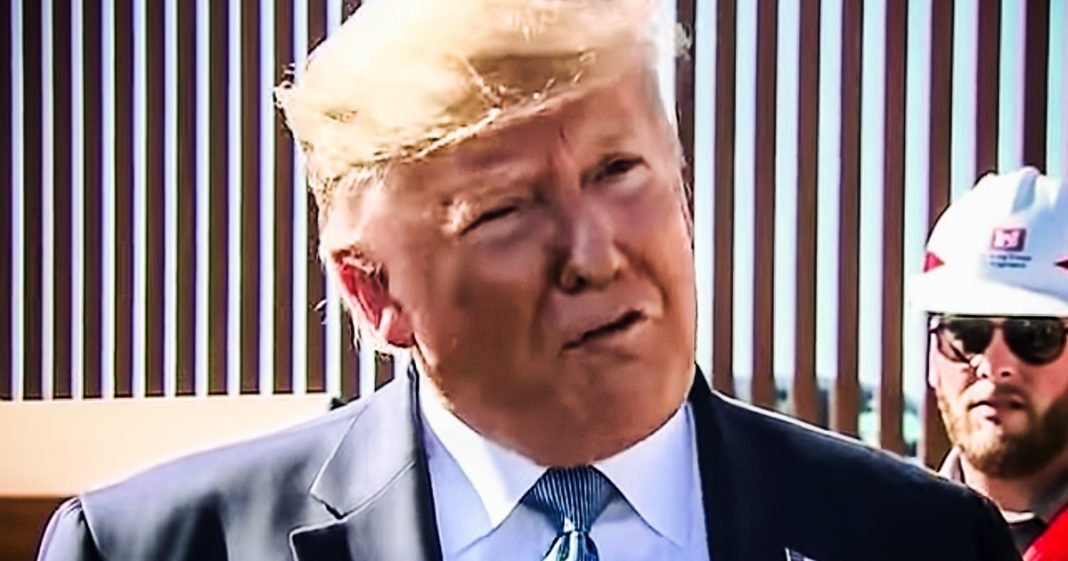 Donald Trump is furious that the New York Times reported that he wanted a moat filled with alligators and snakes along the southern border, in addition to an electrified fence with spikes on the top. So either the dozen staffers that spoke with The Times are lying, or Trump is, and it isn’t difficult to figure out who is telling the truth. Ring of Fire’s Farron Cousins discusses Trump’s denial and his insane plans for the border.

So earlier this week, we had that bombshell New York times report about that a meeting that took place in the oval office, in March, where Donald Trump suggested that not only do we put a moat filled with alligators and snakes at the Southern border, but we should also electrify the fence and put spikes on top that could Pierce human flesh. Now, in the time since this article has come out, Donald Trump has repeatedly denied that any of this ever happened. It’s fake news. It’s the media making stuff up to make them look bad. His supporters are out there saying, well, he was joking when he said these things, so they actually think he said them just that it was obviously ingest, but before I get to why Trump’s obviously lying, I’m going to read the exact quote from the New York times right here. Paragraph number three privately, the president had often talked about fortifying a border wall with a water filled trench stocked with snakes or alligators prompting aides to seek a cost estimate.

He wanted the wall electrified with spikes on top. That could Pierce human flesh after publicly suggesting that soldiers shoot migrants if they threw rocks, the president backed off when his staff told him that was illegal, but later in a meeting aides recalled, he suggested that they shoot migrants in the legs to slow them down. That’s not allowed either. They told him, so that is word for word what the New York times reported. Trump says it’s all fake. But then later on, the New York times mentions the fact that they spoke to more than one dozen white house officials who all obviously requested anonymity for the article, but more than one dozen people were able to recount this same story because they were there. So in order for Trump’s claim to be true that this is fake news, all 12 plus of these people had to have been lying about it.

They somehow would have all had to have gotten together, conspired to tell this story of the alligators, the snakes, the electric fide spikes, and the shooting of the immigrants. All agree upon that story. Then all separately tell the New York times reporters that same exact story in order for Donald Trump’s claim to be true, that the story is fake. So who do we believe? Should we believe the man who is told more than 10,000 lies since taking office or should we believe the individual people who all seem to have the exact same story to tell? I’m going to go with the anonymous storytellers here because they seem to have a lot more credibility than Donald Trump. And let’s suppose for a second that even if they’re Republican supporters of Trump are correct and he was joking about the alligator moat. What about the shooting of the migrants? Was that a joke too? Was it a joke when he said let’s shoot him in the legs to slow him down? Cause if it was, it’s not very funny, and I don’t think it was not even a little bit, this is how psychotic Donald Trump is. They later in the article went on to quote one of the aides who was present at the meeting. You’re making me look like an idiot. Mr. Trump shouted, adding in a profanity as multiple officials in the room described it. I ran on this. It’s my issue and that’s the problem Donald Trump has right now because nothing’s really happening along the Southern border. No new border wall is actually being constructed. They’re replacing some border wall that was already there. Trump already spilled the beans on some of the high tech toys that these new sections of the wall, or I’m sorry, replacement sections of the wall are going to have, but none of them had spikes, electrified spikes. I didn’t see any moats, no alligators, no snakes knew nothing. And Trump understands that if he doesn’t get this delivered for his hardcore anti-immigrant base, that base is going to start shrinking. He already lost Ann Coulter cause he’s not tough enough on the uh, migrants coming across the border and he’s going to lose a lot more than that if he doesn’t give them something. And that something crazily enough could have been a moat filled with alligators, probably surrounded by snipers ready to shoot migrants and break the law murder people who were simply trying to do the legal thing, which is seek asylum in the United States, which let’s never forget, is not illegal.