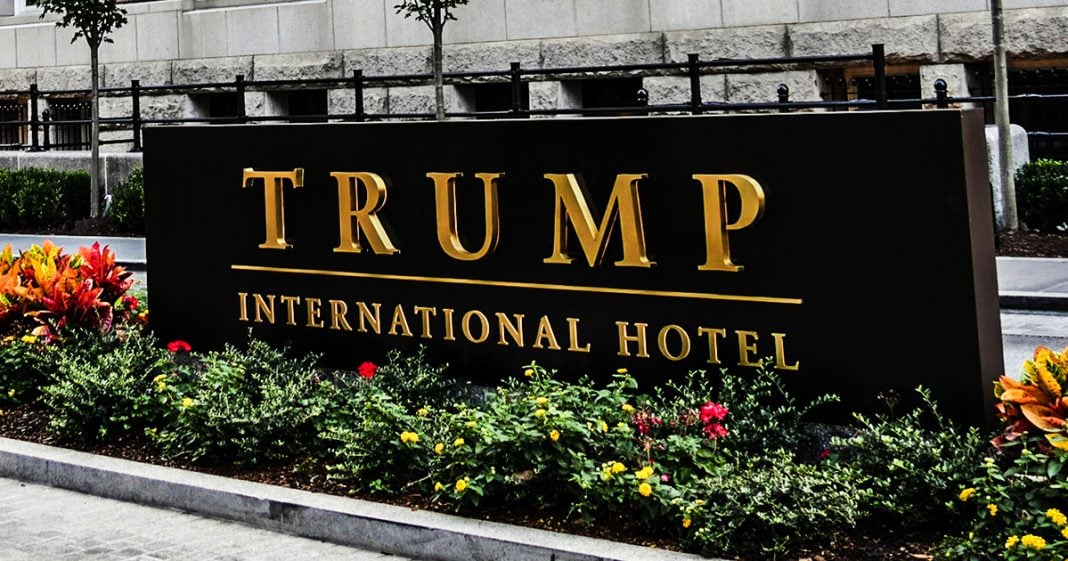 Democrats in the House of Representatives have launched an investigation into “ghost reservations” at Trump’s hotels. These “ghost reservations” are when a client books and pays for a room or space, and then never actually shows up to use it. Democrats believe this is being done at his hotels by foreign nationals and domestic groups in order to curry favor with the President. Ring of Fire’s Farron Cousins discusses this.

Well folks, there is another investigation happening into Donald Trump and his potentially corrupt business practices that’s actually being carried out by Democrats on the House Oversight Committee, and this particular investigation involves Donald Trump’s hotels and the money that Trump has making off of those hotels. According to Democrats on the House Oversight Committee, what’s happening right now is they got word from several groups, including one foreign country that they had been booking large blocks of hotel rooms at Donald Trump’s hotel properties, paying for them but never actually using them, and the Democrats on the House Oversight Committee rightly believe that all of this was done as a way to indirectly put money in Donald Trump’s pocket to Curry favor with the president of the United States. Maybe they thought they could get something in return. Maybe if we pay him a few thousand dollars here, a few thousand dollars there at his hotels, but never actually used the services so they don’t have to incur any expenses off our money, then yeah, maybe he’ll play ball with us in the future.

Now, the oversight committee has not released the names of the country or the groups here in the United States that have been doing this. This is an ongoing investigation, but it’s an investigation that according to a representative Jerry Connolly from the House Oversight Committee, Nancy Pelosi is likely going to go ahead and rope this into the overall impeachment inquiry as well. See, here’s the thing. Pelosi had said that she kind of wants to narrow the scope of the impeachment inquiry into just the Ukraine phone call, but it turns out behind the scenes it’s actually not what’s happening. She is allowing these other investigations to move forward and if they bear fruit, they will also be used in the impeachment inquiry. So props to Nancy Pelosi for that. That is a good move and it keeps Trump focused on the Ukraine call instead of worrying about all these other investigations happening, like the one into a Deutsche bank, this one into his hotel and the violation of the emoluments clauses as well as the obstruction of justice, uh, mentioned in the Mueller report.

But this one’s pretty big because this one is a massive violation of the emoluments clause. And it kind of confirms what we’ve been saying since the very beginning because Donald Trump did not divest from his businesses and he does still receive a profit. The profit by the way, goes into a blind trust that he isn’t allowed to touch unless of course the person in control of the blind trust says it’s okay for him to do it, but we don’t have anything to worry about there because the person in charge is Donald Trump jr. So literally Donald Trump Jr.’s the only gatekeeper between Donald Trump, president and his billions of dollars, allegedly billions. Maybe it’s just millions. Who knows? We’ll find out if we ever get those tax returns. But nonetheless, we have to trust Donald Trump Jr. to prevent daddy Trump from using and abusing his money. So yeah, that, that, that should totally make us feel secure. But again, he didn’t divest. He still gets the profits and these countries and companies know how to manipulate him. And again, we’ve been saying that since the beginning, you give this man money, he will take care of you. That’s the bottom line, because that is the only thing on this planet that Donald Trump actually cares about. This is a big investigation and it’s easy enough to understand that. Should they include it in the impeachment inquiry? This is one that the public will easily understand is illegal.