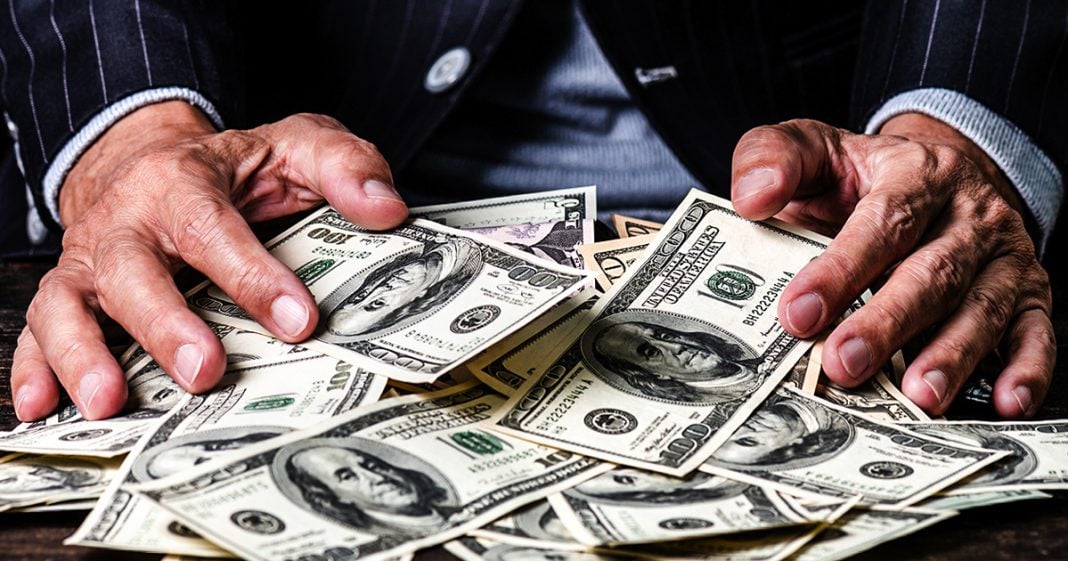 According to new reports, the global elite are raising their cash reserves as they fear a recession is on the horizon. Most of them predict that the recession will officially hit next year, and they don’t want to get caught flat-footed. But what about those who can’t liquidate their assets? Ring of Fire’s Farron Cousins explains what’s happening.

If anybody’s familiar with the Tim Pool, internet commentator, pretty much a centrist, I’m not sure if he’s a Democrat or Republican. I think he likes to pretend he’s a Democrat, but the guy’s basically a libertarian troll is what he truly is. So anyway, on Twitter the other day tries to correct AOC who says billionaires should not exist. And he says, no money has $1 billion goofball. He didn’t say goofball. I’m adding that in, but he said, nobody has $1 billion. It’s all tied up. And you know things like real estate and stock options, nobody is sitting there, no one he said has $1 billion in cash. Tim Pool’s not very good at what he does. Folks. I’ll be honest, he’s not simply isn’t. But here’s the thing that I think Mr. Pool needs to understand what’s happening right now according to new reports and a UBS, a global study, is that these wealthy elite, these millionaires and billionaires that Tim Pool claims don’t actually exist except on paper.

Do you know what they’re doing, Tim? Those assets you claim they have that are not liquid. Uh, they’re liquefying them. 42% of family financial firms across the globe have said that they are starting to liquefy their assets, put it into cash because they’re afraid that we’re less than 12 months away from a recession and they know that if they have everything tied up and saved stocks, bonds that aren’t paying off very much, they’re going to lose a lot of money. But the one way, they can’t lose money, they may not make money off it, but they’re certainly not going to lose any, is if they liquefy it and put it in cash as Mr. Pool claims they never do. And yet, here’s the evidence, here’s, here’s a Bloomberg report on this UBS study. It’s real, it exists. And it counters everything that Mr. Tim Pool was trying to correct a AOC on.

Here’s the fact of the matter, folks, billionaires do in fact exist. They do have large cash reserves and they’re hoarding their cash right now. No, it is not all tied up in real estate or stocks and bonds or whatever it is out there. They’re liquefying as fast as they can because they see a recession on the horizon. And you know what? This is all well and good for those millionaires and billionaires liquefy it all, put it in cash, wait until the recession dies down. Awesome. What about the rest of us? What do we do? We don’t have any assets that we can liquefy in order to, you know, whether through the coming recession, maybe it will be short, maybe it’ll be long and spiral down into a full blown depression. We don’t know yet. But experts, economists from all over the globe are predicting a massive economic downturn within the next 12 months. I mean, the world bank, uh, just cut. It’s 2019 global forecast to the lowest level since the last meltdown. The world bank sees it coming. The wealthy elite see it coming. So they’re liquefying those assets as fast as they can, putting it in cash, stashing it away. Maybe in an offshore tax Haven, maybe just the irregular bank, maybe in a safer little mutual fund, but whatever it is, Tim, they have the cash. It’s not all tied up in real estate. And fancy Jetson only exists on paper. That’s not how it is. You need to take a look at what’s actually happening in the world. You need to read a little bit more to find out what these millionaires and billionaires are doing. And if you do, you’ll see that AOC is correct. Bernie Sanders is correct. billionaires should not exist, and billionaires are making their fortune off the backs of everyone else. And now, now that they see things getting a little dicey out there in the economy, they’re putting as much as they can in cash so they can sit on those massive piles until the recession is over.