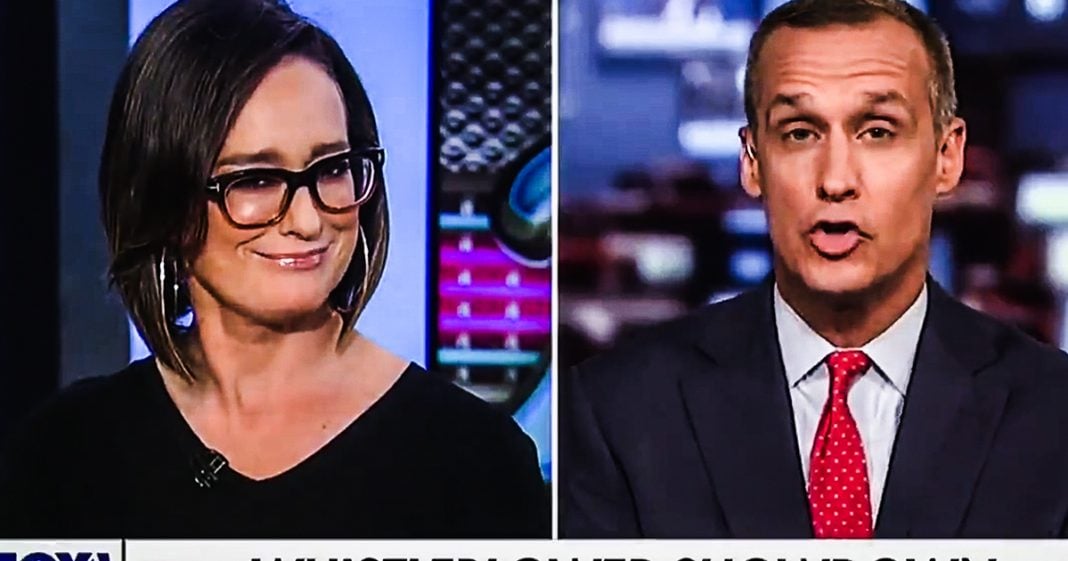 Former Trump campaign manager Corey Lewandowski seemed a little off during a Fox Business Channel appearance earlier this week, to the point where host Kennedy had to ask if he had been drinking. Lewandowski was slurring his words and couldn’t seem to stay on topic, forcing Kennedy to abruptly end the interview while suggesting that Corey go have some coffee. Ring of Fire’s Farron Cousins discusses this.

So something interesting happened on Fox business channel Wednesday evening and uh, well I’m just going to let the clip speak for itself. Here it is, Corey Lewandowski, giving the weirdest interview ever.

Corey Lewandowsky:        We know that the whistleblower is a former CIA agent who is detailed to the NSC. Who’s probably back at the CIA, who hates this president more than they love their country. And the fact is they never had any firsthand account of what transpired.

Corey Lewandowsky:        No. Look, look what I’m mad about, Kendy is that they’re still blaming the president for this conversation with Ukraine president Zelensky. And what this is really about is people who don’t love this country as much as they hate the president.

Corey Lewandowsky:        There’s no president in the history of our country before this one who’s had so many leaks. And that should be a real concern for our national security apparatus.

Now, the thing I love the most about this is that while he denied having any alcohol, did not have a merlot. Maybe he should have, as he said, but the fact that his behavior, the words he was using is exactly what a drunk person would do, right? Judge, I love America so much. I mean, she just love it. Like Kim Kennedy. Kennedy. Do you love it? Like we, we, you ask America if he loves me too, but don’t, don’t make it obvious. It’s just, I love it. I, this was nuts, right? There’s very little doubt that Lewandowski, uh, it was a little bit tipsy in that particular interview, but in his defense, I mean, if we had to work for Donald Trump or try to get him reelected or even try to defend all of the crazy crap that he does on a daily basis would probably drive us to drinking as well.

Now, the big thing I take issue with is obviously with Lewandowski is implying here. He’s trying to say that as Republicans typically have recently a Democrats hate America. Hate Donald Trump more than they love America. Sorry. Yeah. They hate Trump more than they love America. What does that mean? Right? It’s a meaningless talking point yet we’re seeing Republicans say that all the time and they have been not just for months, probably since Trump got elected. They hate Trump more than they love America. It means nothing but to idiot Republican voters. It means everything. It absolutely means everything. Democrats hate America. That’s their talking point is now and has been for quite some time. Also to take issue with Kennedy here telling Lewandowski that he sounded a little Biden-esque as in yeah, Joe Biden goes out there and sometimes he says stupid things. He had that one time where as I got very red, like he ruptured a blood vessel, but let’s not forget that Donald Trump, who Kennedy likes to defend has also given plenty of speeches where he kind of seemed a little out of it and didn’t quite know what was going on and he slurry a little bit.

So come on Kennedy. Don’t try to be like Biden’s. The only one out there who sounds like a moron because your guy sounds like a moron far more often than Joe Biden, and that’s a pretty, pretty big feat for him to pull off. But nonetheless, Lewandowski ended up getting abruptly cut off in that interview because of the fact he was obviously visibly intoxicated. This is what you get from the Republican’s Lewandowski admitted a week ago. He lies to the media, so maybe he had to get a little liquored up. So we had that liquid courage inside of him to go tell the lies that he needs to tell in order to protect his Uber corrupt boss.