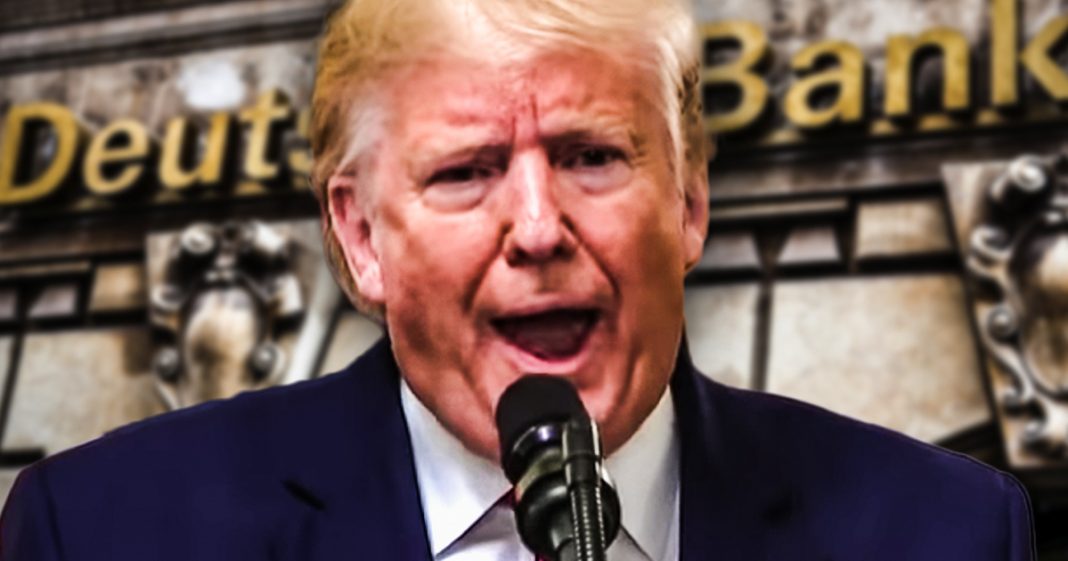 The son of a former Deutsche Bank executive has become a cooperating witness in the ongoing investigation of Trump’s finances, and he’s handed over a treasure trove of documents to both Congress and the FBI. Everyone may be focusing on Trump’s Ukraine call right now, but the bigger scandal is unfolding with his banking records. Ring of Fire’s Farron Cousins discusses this.

So I know the talk of the town recently has been all about Ukraine with regards to Donald Trump’s impeachment. But let’s not forget, okay, this guy is still facing several different investigations that are also pretty damaging. One of the ones that continues to fly under the radar is the Deutsche Bank scandal. And according to reports this week, that would apparently seems to be blowing up pretty massively as well, maybe not as quickly and as publicly as the Ukraine story, but the reports out this week say that a man by the name of vow Broeksmit who happens to be the son of a former Deutsche Bank executive, uh, who died in 2014. Mr. Broeksmit not that long ago was going through his father’s files and his father’s emails and came across a treasure trove of documents, some of which pertained to Donald Trump and his finances. And then Mr. Broeksmit, who for some reason his friends with Moby went to a party with Moby and Moby, who is friends with Adam Schiff.

Adam Schiff was at the party and introduced Broeksmit to Schiff and Broeksmit says, Hey, I’ve got a lot of these documents from Deutsche Bank. Uh, you know, some of them seem to implicate Donald Trump. Give me money and I’ll hand them over to you to which shifts said of over, I’m not going to pay you for this. This is ridiculous. Then shift goes back to work and subpoenas the documents instead. So Broeksmit turns over the documents. He also gave them to the FBI, gave some of them to journalists and that’s where we are today. They have these documents, both the FBI and Democrats in the house of representatives. And this isn’t something that actually just happened this week. This is something that happened a little bit ago. So for all the talk, you know of Adam Schiff, Donald Trump’s attacks on Adam Schiff, maybe he’s directing his anger at the wrong person because Adam Schiff is not part of the committee.

I believe that’s investigating this. This is a financial services committee issue. This is a judiciary committee issue. It’s not the intelligence committee where shift is sitting. No, it’s the other ones. So sure, Donald, keep attacking, shift. Go for it. Cause the real investigation, the one that truly threatens you and your entire family that’s taking place and you’re completely ignoring it. And luckily so is the media because the longer people ignore this story on the higher level, the more they’re able to get done. The more these whistleblowers like Mr. Broeksmit, who yes, admittedly was out for money but didn’t get it, turn it over anyway. The more people like this and maybe willing to come forward. Deutsche Bank has expressed their interest, their desire to comply with congressional subpoenas. It’s the Trump administration that’s holding that up in court. It’s not going to last long, but once they do, the floodgates are going to be open on these documents in all hell is going to break loose for the president while he’s too busy, right now, bitching about the Ukraine story to acknowledge the fact that his entire empire is about to come crumbling down.