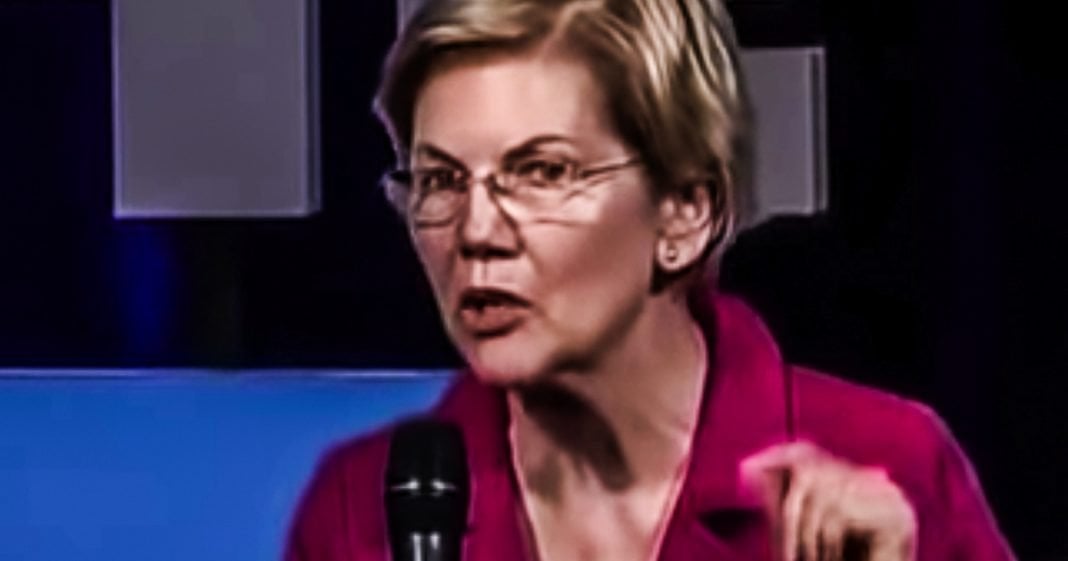 Wall Street bankers aren’t happy with Donald Trump, but they certainly don’t want Elizabeth Warren to be president, either. They have now admitted that if Warren is the nominee, they’ll either sit out the election or they’ll start throwing their support behind Donald Trump. This is how spoiled brats act, and its actually a pretty big endorsement of Elizabeth Warren. Ring of Fire’s Farron Cousins discusses this.

*This transcript was generated by a third-party transcription software company, so please excuse any typos.
According to a recent report by CNBC, wall street bankers are absolutely sick and tired of Donald Trump. They don’t like the guy. They don’t like the fact that they had to create this COFI index where they determine how many tweets he’s going to send out and how badly that’s going to make the market tank. They’re not happy about the trade war. It’s hurting the market. They don’t like the guy cause they’re losing lots of money. But as CNBC said, they are more than willing to throw their emotional and financial support behind Donald Trump. If the democratic party chooses to nominate Elizabeth Warren for president in 2020 they may be Democrats as they describe themselves. They may dislike Donald Trump as they’ve said. They may worry that he’s hurting them financially. But Elizabeth Warren for these bankers is an absolute deal breaker and I think one of the bankers who spoke on the condition of anonymity says it best. You’re in a box because you’re a Democrat and you’re thinking, I want to help the party, but she’s going to hurt me so I’m going to help president Trump. You’re a spoiled little brat. And what happened is that mommy Warren came in and said, I’m not going to let you finish all your candy. You’ve had too much candy. So we’re taking some of the candy away for the rest of the day. And little spoiled brat wall street banker starts throwing a massive temper tantrum cause he knows he already has a tummy ache that’s the problem. He knows that he’s sick. He already threw up one time on the floor and it’s just sitting there. He’s ignoring it, but he says, no this is my candy, you can’t have it Mommy, and Elizabeth Warren’s sitting there like, I’m going to take your damn candy kid. You’re throwing up on my floor. You’re ruining everything and it’s not even all your candy anyway, you got to give some to the other kids, but spoiled brat little banker says no, and he says, you know what I’m going to do? I’m going to go to the neighbor, the crazy neighbor, the guy with the windows van, that’s Donald Trump. He’s got lots of candy and I’m going to go hop in this windowless van with a maga sticker on it. And get all the candy I want because there’s going to be no consequences in that van. Ladies and gentlemen, I present to you wall street. That is what’s happening. Now. What is a little bit weird to me though is the fact that they’re only singling out Elizabeth Warren on this. Yes, Elizabeth Warren has her wealth tax. Yes, she has made attacking wall street, you know, part of her brand as a, as a person, but so is Bernie Sanders. Why? Why are they not freaking out about him? His plan would, would cost them probably even more and I think the reason is because they don’t think Bernie can do it, but they do think Elizabeth Warren can do it. You know, she is rising in the polls. Hell, one of the polls has hurt the very top right now it’s show. They’re trying to hyperfocus on her while ignoring Bernie Sanders and that’s actually going to benefit Bernie Sanders. Elizabeth Warren should use this as she has actually as an endorsement. If you’re making wall street afraid, then you’re doing something right. If they’re embracing you like they did Joe Biden last Thursday at a major fundraiser, then you’re probably not the kind of candidate that we need as our nominee for 2020.