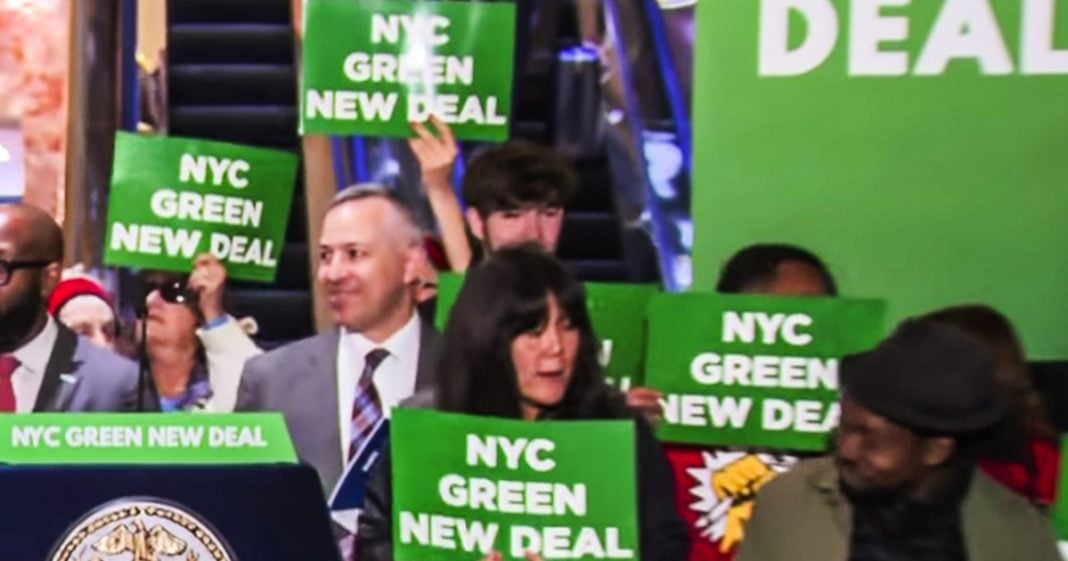 According to the latest round of polling, The Green New Deal is viewed favorably by more of the electorate than unfavorably, showing that the issue is a clear winner among the voters. They particularly like the fact that the Deal would boost the economy and create jobs. This is what we’ve been saying for YEARS, as Ring of Fire’s Farron Cousins explains.

*This transcript was generated by a third-party transcription software company, so please excuse any typos.
Democrats are still trying to come up with the perfect message that they can sell to the American voters that they believe will help put them into the white house in 2020 well guess what folks, if the Democrats were paying attention to polling, which some of them are because their positions on a lot of policies are super popular, but if they were paying attention to policies and polls as a whole, the democratic party would understand that there truly are some issues out there that are clear winners for the Democrats. Medicare for all is one of them. Debt free college and student loan forgiveness is another, but another one that has emerged as a major winning issue for Democrats, including among swing voters, is the green new deal. According to a new poll from data for progress, 49% of people in swing districts here in the United States, 49% approve of and support the green new deal framework. While only 36% of voters in these swing districts say thanks, but no thanks, not interested in it. So you have 49, you have a 13% plurality saying we want the green new deal. And here’s the kicker. It’s not just because you have 49% out there that say, Oh God, we’re destroying the planet. We’ve got to do something. We’re running out of time. No, it’s because they say, listen, we know it’s expensive. We don’t care because it’s going to boost the economy. It’s going to help the environment obviously, but it’s also going to create jobs and that’s going to be an overall huge net benefit to the United States. So why would we not support this? Because they’re thinking in economic terms. Many years ago I wrote an article, some interviews, uh, one of them with Tom Hartman where I explained that we have to shift our talking on environmental issues. We have to shift it away from environment. And I know that sounds weird, but this came after years and years and years of writing about environmental issues, talking about environmental issues and not being able to sway enough people to get some actions. So I said, we’ve got to do so we got to rethink what we’re doing, and let’s frame it as an economic debate. This was years ago that I suggested this and I have been talking about it in those terms ever since, and then suddenly the green new deal comes out and what did it do? It shifted from being, Oh my God, we’re destroying the planet. We have to take action too. What if not only save the planet, but we boost the economy. We create jobs, we reduce emissions, which saves you money on your medical bills. You don’t have as many asthma attacks, you don’t have as many heart attacks, there’s not as many strokes. Those are good things that save John Q taxpayer money and not happy with your job in the coal mines. We can give you a job over here in the renewable energy sector, you’ll make more money over here. You’ll live a healthier lifestyle and as a byproduct make the world a little bit cleaner. How about that? And they did it. And the reason I’m even bringing that up is because the, the people polled in this latest poll, the 49% say, we don’t care that it costs a lot of money. We care that it’s going to help the economy. Notice they’re not saying we care, that it’s going to help the environment. They do care about that. Everybody cares about the environment. There’s just unfortunately not enough people in the world really willing to actually do anything about it. But the economy, they feel that with the environment, they think, okay, but really it’s not going to effect me even though it will. But they always have that viewpoint like, Oh no, no, no, no. It’s probably my neighbors are going to be affected. Maybe the state next to me. Uh, but, but I think I’m fine so I don’t have to worry about that too much economics that affects every one of us. And you can’t deny it. Climate change, again, it does too, but people can externalize that to an extent. They can’t externalize the financial issues. So to bring this full circle here, this is what it is, Democrats, if you want to win in 2020 Medicare for all debt free college and loan forgiveness, and almost most importantly, green new deal, it’s a winner with the voters. It’s a winner for the environment and it’s a winner for the economy.