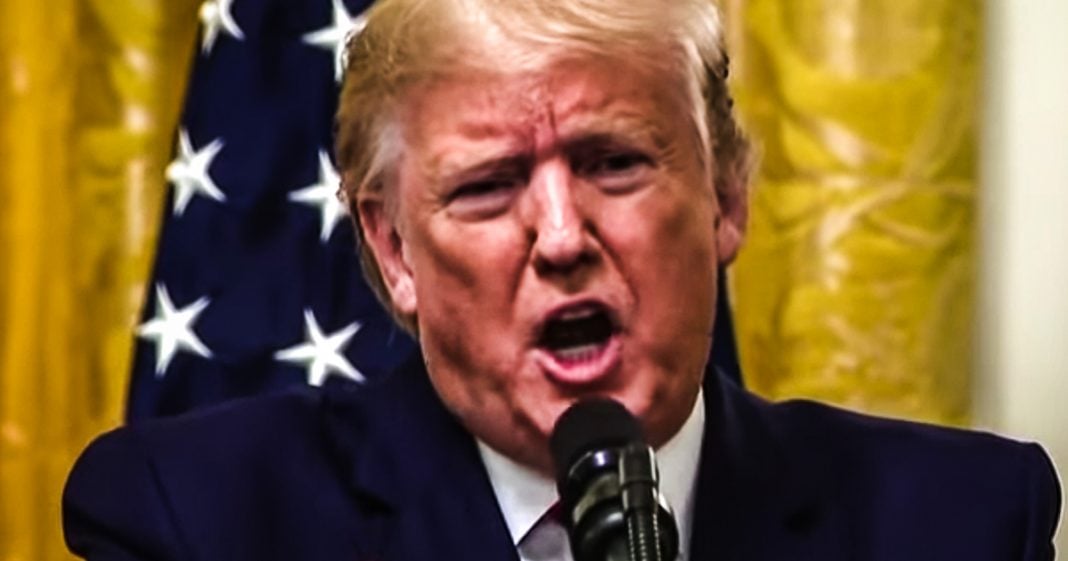 Republicans are panicking behind the scenes in Trump-Land where the President is growing increasingly unstable about the threat of impeachment. The problem that the Republicans have – including his staff and the staff of senior Republican lawmakers – is that he won’t listen to ANY of their advice and he’s just winging it as he goes. Trump has a habit of ignoring people’s advice, and this time it could cost him his job. Ring of Fire’s Farron Cousins discusses this.

Well, it certainly has been an interesting week in terms of the tweets coming from Donald Trump and his statements. Obviously a two reporters. The man seems more unhinged than usual, less mentally stable than usual, and that is saying a lot. And he finally resorted to actually cursing in one of his tweets this week, which is something we had not yet seen when talking about any of his scandals. He’s frightened and he’s angry

and Republicans in DC don’t know what to do. According to a report from the New York times earlier this week, insiders, both in the Trump administration and in Congress in the Senate are terrified because Donald Trump’s response to this impeachment inquiry has been absolutely erratic and at many times quite insane. They’re scared about the fact that the president has not yet set up any kind of war room to deal with the impeachment inquiry where he would bring in maybe Republicans who, who could help him give him advice. How you get 14 Republicans sitting in the Senate today who were actually there when bill Clinton was impeached. They know what they’re doing, at least on that side of it, why not listen to them? Why not talk to them? And that’s what the Republicans are screaming. Let us help you, Mr. President.

But Trump doesn’t want any of it. He is a control freak and he thinks he’s got this in the bag. Here is a quote from this New York times piece behind the scenes, Mr. Trump has seesawed from projecting confidence that there is a political benefit from the impeachment fight to lashing out at AIDS, blaming them for the fact that he is entangled by it in the first place, but he won’t listen to them. Yes, the AIDS did convince him along with members of Congress to release that, a phone call summary, which kind of kickstarted most of this, but at the same time, these people do, I think genuinely want to help him, but he’s not taking it. He’s not having it. He’s going to go out there and tweet whatever the hell he wants because he thinks he’s the smartest guy in the room. And when you always think you’re the smartest guy in the room, there’s a good chance you’re not even close to it. And that’s the situation with Donald Trump. He doesn’t know politics. He clearly doesn’t know the law and he needs to listen to those people who do if he wants to keep his job. Now, personally, I hope he keeps on keeping on the way he is because he is absolutely digging himself a bigger hole. I hope he encourages Rudy Giuliani to do more TV appearances. Giuliani was on Hannity a Wednesday night where he implicated the state department in this whole thing and even though he was off screen, you could hear Hannity mudder. Oh my God, that’s how bad it is folks. That’s how bad Rudy Giuliani is making it and that’s how bad is making it and these Republicans are getting annoyed, listen to us or you could lose your job, but according to right wing or Eric Erickson, this is what he said on Twitter the other day. He said, I’m starting to encounter Republicans who wonder if maybe the president should step aside for Pence. They’re absolutely in the minority. On the GOP side, but there does seem to be a fatigue setting in tired of always fighting and always having to defend. It’s anecdotal and as he said, it’s a small group of them. But have you ever had a crack in your windshield, in your car, have you? You start off in little rock hits it and you’ll small ding there. As time goes on, that little crack exposed to weather elements, you know, shocking, drastic temperature changes that crack grows. And the fun thing about windshield cracks, and I notice a weird analogy, once it hits a certain point, it spreads like a wildfire to the point where that windshield is completely useless. And that’s what’s happening with Trump support right now. It’s a tiny crack. It’s not even a crack. We should be concerned about not all cracks grow.

This one might, this one could. And the way it could is if Republicans in Congress, whether it’s the house or the Senate, if they finally start to see that defending this president is going to hurt them in their reelection next year, you better believe that tiny little crack is going to grow so big that Trump won’t stand a chance against impeachment.