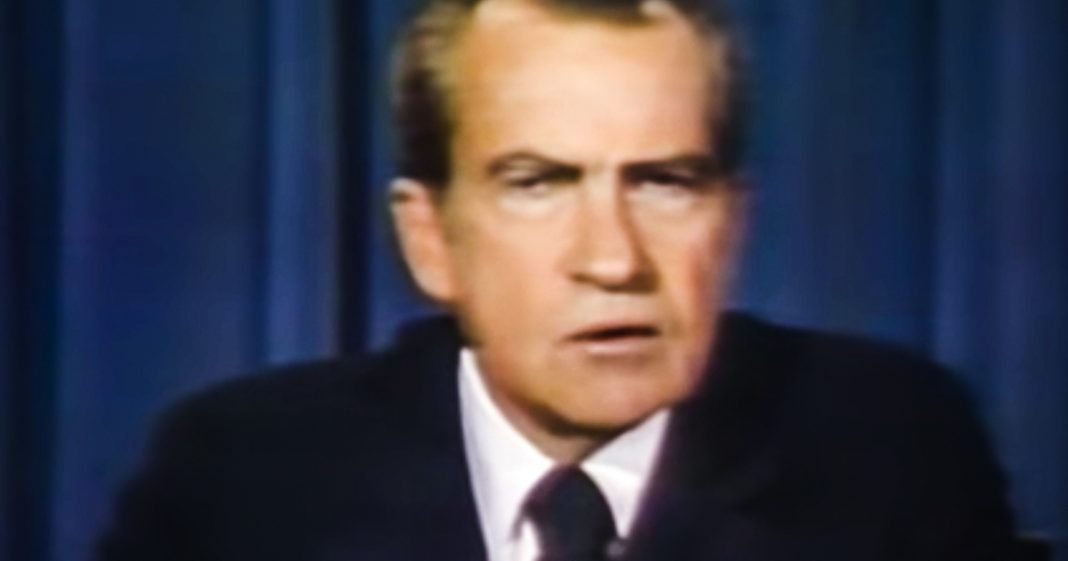 Richard Nixon was confident that he could survive impeachment hearings in 1974, until the day came when too many Republicans were no longer willing to defend him. The numbers in Congress are certainly different today, with Republicans holding a decent advantage in the Senate, so maybe we’re not looking at a Nixon repeat, or maybe the evidence will become so damning that even the most ardent Republicans can’t ignore it anymore. Ring of Fire’s Farron Cousins explains the similarities and differences.

*This transcript was generated by a third-party transcription software company, so please excuse any typos.
You know, a lot of parallels have been drawn between Richard Nixon and Donald Trump with the both of them staring down impeachment. We have talked about it here and last week I brought up the point that Nixon didn’t have people like Fox news and Breitbart and daily caller out there defending him every day. So the landscape is very different today than it was back then. But some things never change. And what never changed is the fact that it doesn’t matter what the idiot corporate media says about these things. It comes down to the house and the Senate. See back in the day, 1974 Richard Nixon knew for certain he was going to weather impeachment. He didn’t, he didn’t worry about this. He was as arrogant and brash about it as Donald Trump is today. He knew that even though Democrats had a majority in the Senate, they wouldn’t have the numbers to remove him from office. So what’s the big deal? But just to, you know, be on the good side. White house released a tape on August 5th, 1974 that later came to be known as the smoking gun tape because the white house was very foolish and the Supreme court kind of smacked him down and made him do it. Uh, but uh, yeah. On the tape, you heard Nixon talking about the cover up of Watergate. At that point, Nixon realized, crap, I shouldn’t have released that. If that sounds like anything that’s happened in the last week and a half, it’s because it did. That’s exactly what happened with Donald Trump and his white house with the release of the so-called transcript from the Ukraine call. They thought, Hey, this is going to be pretty cool. Oh, Oh, Oh no. It says all the things that I said, Oh God, no, that’s bad. No. And all his aides are suddenly like, Oh, I wish we hadn’t done that. Oh no. It’s kind of like a smoking gun. So Anyway, that tape was released by the Nixon administration on August 5th, 1974, two days later. Couple of Nixon’s friends 2, from the Senate. 1 from the house came into the white house to meet with him and Nixon asked what he asked him every day, what are the numbers say? Did the number say yes, I’m okay or no, I’m in trouble, and for the first time, both the house and Senate representatives in there with him, they said, the numbers tell you no, you’re not going to survive. You finally, because of the release of this tape, you finally lost the enough support to remove you from office. Then Nixon resigned. That’s how that happened. That’s how that played out. But for the longest time, because this, this inquiry went on for eight months, folks with Nixon, eight months, he didn’t have a care in the world. He was telling the media the things that I know, we’ve all seen the snippets of the headline going around. Social media was telling us it was a witch hunt, that it was completely fabricated by the opposition because they were mad that he became president and they didn’t sound familiar. Again, it is the same story is playing itself out today with a slightly different set of variables though. And that’s what’s a little concerning. Current makeup of the Senate is 53 Republicans, 47 Democrats, which the 47 Democrats actually includes the two independence who vote with the Democrats. So so 47 Democrats, 53 Republicans. In order for an impeachment trial to be successful in the Senate, you would have to not only hold on to every Democrat and independent that you have, you’d have to bring over 20 Republicans to vote to convict and remove. That seems impossible, doesn’t it? And it likely is impossible. But there’s still that like 1% chance that you could start flipping some folk, a couple of them here, a couple of them there. Probably some Republican senators from areas that have been hurt by the trade Wars may be maybe test those folks out cause I think those are the ones that are going to be able to flip the fastest because all it takes is a couple and I know you’ve got to get to the 67 number but you flip one in. Suddenly a couple others say, Oh maybe this does have a shot. Maybe it’s not as political politically damaging as I think I’m a flip to. Oh crap, they’re both flipping. You know what I am too. It’s so on and so forth. Like ripples through pond more and more will stand up. But you got to get that ever elusive first one. It is not impossible. It’s improbable, but it’s not impossible. As it stands right now today I don’t think impeachment or excuse me, removal from office conviction is a, is going to happen in the Senate. But I do see that pathway where it could, and if Democrats in the Senate are smart, they’re going to start laying the framework on that pathway. The polls are in their favor, use them. Those are tools. Those are weapons for you. use them the way you need to in suddenly this path that we’ve got a 1% chance of going down. Suddenly it’s going to become the only way we can go.