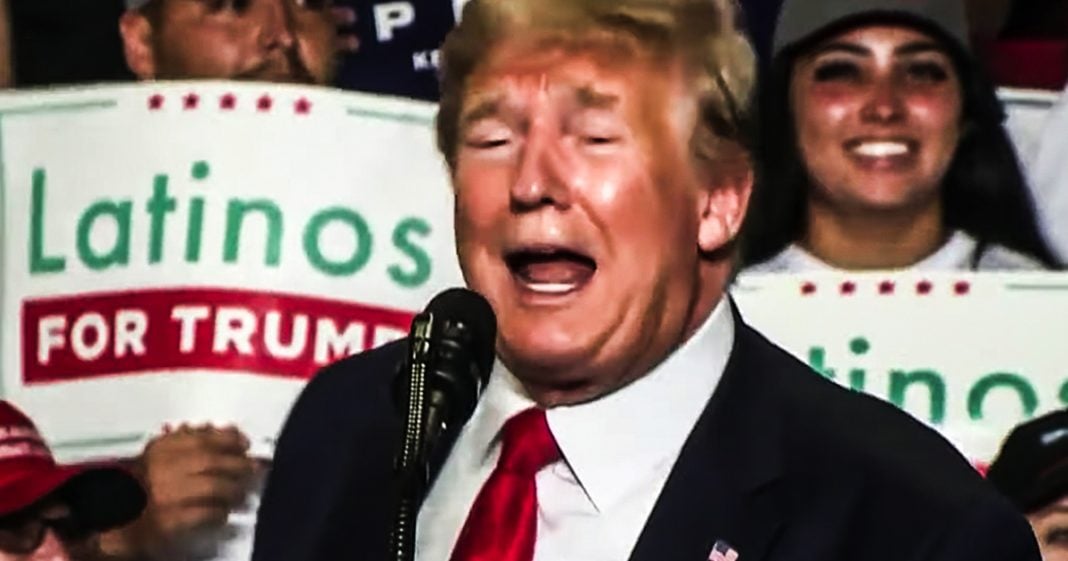 Donald Trump loves to claim that he’s been great for African Americans and Latinx voters, but they certainly don’t see it that way. Trump only has a 2% approval rating from African Americans, and 19% approval among Hispanics. This undermines the arguments being made by right wing grifters like Candace Owens, as Ring of Fire’s Farron Cousins explains.

*This transcript was generated by a third-party transcription software company, so please excuse any typos.
Donald Trump loves to tell us that African Americans and Hispanics are doing so, so much better in his America than they have at really any other point in American history. And when you compare it today to other points in American history, yes, I’m sure you could probably make that argument except for the fact that they’re not doing better today than they were, say four years ago, eight years ago, and that’s not coming from me. That’s actually coming from those demographics. According to the latest polls out there, which as most polls do, they show very bad news for the president. He has an approval rating among African Americans of 4% 4% when you factor in the margin of error of the poll, it’s a little under 2% but we’ll give him the benefit of the doubt and say there’s no margin of error, and we’ll say he’s got 4% of black people in the United States actually think Donald Trump has done anything at all to help their community, Hispanics, a little bit more favorable of Donald Trump. They’re rocking a solid 19% approve of Donald Trump and believe that he has helped Hispanics 4% on African Americans, 19% on Hispanics and this man loves to tell us how great he has been for both of these communities. Now, now where this poll gets really interesting here, and I want to read this, this is from the Hill because the other questions for the African Americans were, has your life improved? Has Trump made ah life better for all African Americans? Only 4% say yes for Hispanics. Same thing as Trump made life better for Hispanics. Only 19% said yes, but then they asked the same question to white people about Africans, America, African Americans, and Hispanics. So this is what white people said among white Americans. Respondents, roughly a third said, Trump’s actions have been good for black Americans. Women and Hispanics, while about a quarter said they’ve been good for Muslims too. And then you go and you talk to people in those, uh, demographics and they’re like, no, no, he hasn’t. But white people sitting back being like, yeah, look how good he’s got it now boy, awhee no, no. This is crazy folks. And part of the reason that this little myth exists that Trump has been so great for African Americans and Hispanics is because of the useful idiots that the right wing media employees to go out there and tell us these lies. You know, Candice Owens has had her little, a bleckzit, which is the black exit from the democratic party. She’s been pushing that since Donald Trump got elected, trying to say, the democratic party is oppressing you. Black people stop being brainwashed. Follow me and let’s go be brainwashed over here. And she thought was successful. She thought she actually created this huge movement and it turns out, no, you didn’t. You’ve got your diamond and silk out there saying how great things are for black people. They’re not. Spend less time on Fox news and more time talking to people out in the actual country because they’re not happy. They’re not doing well, they’re being oppressed and they’re being oppressed by the same white people who look at them. And say, yeah, things are going great for you now, aren’t they? You should be very happy. No, but those aren’t even the biggest problems with this new poll for Donald Trump. The biggest problem is that there was only one demographic here in the United States where Donald Trump holds a solid majority. He does not hit 50% in any other demographic except for the fact that he has 59% approval among white, non college educated voters. So sorry to say it this way, but a dumb white people stop electing crappy politicians and making everyone else in this country suffer.