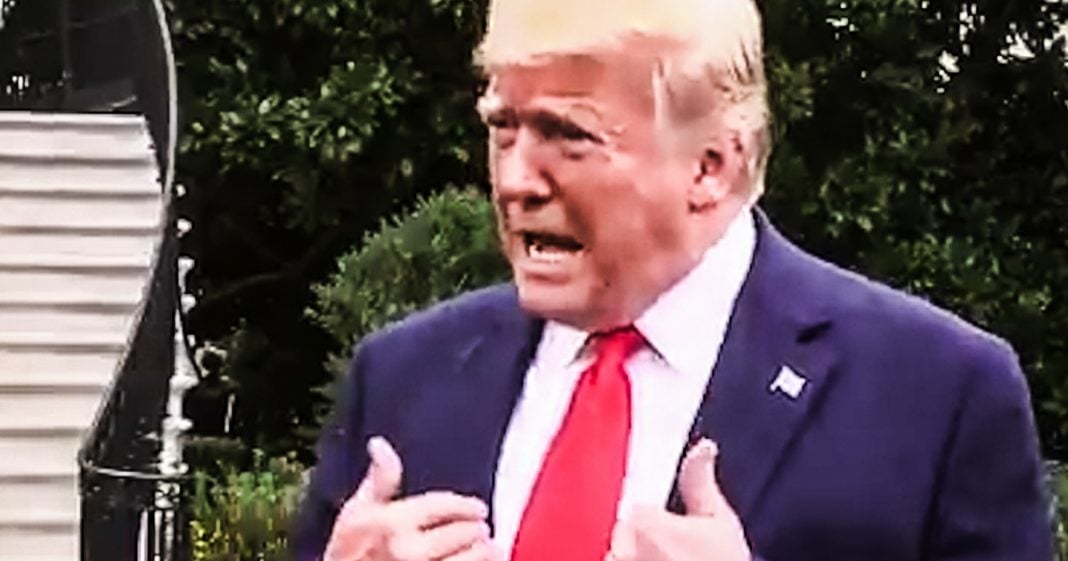 Yesterday, Donald Trump told reporters that he is calling on both Ukraine and China to open investigations into the Biden family, even though neither Biden has been accused of wrongdoing in either country. This is election interference in its most pure form, and the President is breaking the law in full view of the public. Ring of Fire’s Farron Cousins discusses this.

As I’ve repeatedly said, the thing about criminals is that they typically will continue to commit crimes until they’re actually held accountable for their actions. And Donald Trump did exactly that yesterday while talking to reporters. Here’s what he did.

So in case you were wondering. Yes. That was Donald Trump actively asking to foreign countries, Ukraine and China to interfere in the US election. And Republicans are out there saying, no, no, no, no, no, no, no. He’s not asked him to interfere. He’s asking them to investigate the Bidens.

And to that, I have to ask for what neither Joe Biden nor Hunter Biden has ever in any way been accused of committing any kind of crime in either the Ukraine or in China. There is nothing for these other countries to investigate. So Donald Trump’s request here, considering that the two men have never been implicated in any criminal activity in either country, Trump’s request is 100% political. He wants to make Biden look bad. Now, to their credit, China came out this morning and said, yeah, we’re not gonna do that. In fact, the specific quote was the United States can deal with its own problems. And I thought that was a wonderful response because China knows, like we know neither Biden, no Biden has been accused of committing a crime in China. You know the deals that Hunter Biden made, both with Ukraine and China. Sure. Maybe he cashed in on his dad’s name, but as Hunter Biden was not an elected official and Joe Biden did not get him those positions.

There is technically nothing illegal about any of that. The investigation that was happening in the Ukraine. Let’s, let’s not forget, folks did not actually involve Hunter Biden. Hunter Biden was not accused of doing anything. It was the company that he worked for and they were under investigation long before a hundred Biden ever even came over there to work for them. You know, I am no fan of Joe Biden. I, I hope that this scandal does cause him to lose support and he eventually drops out of the democratic race. I don’t want him in there and yet here I am in the position of having to defend this guy because Donald Trump keeps breaking the damn law. That’s what’s happening. He is actively calling in public in front of reporters, on camera calling for other countries to interfere in our elections. He wants dirt on Joe Biden because he believes the Joe Biden’s going to be the nominee.

God bless him and let him continue to think that, let him continue to hammer away at the Democrat that most Democrats don’t actually even want in the race to begin with. And sure there might be something worth investigating with Joe Biden, for example, did he, in fact as Trump is accused of doing threatened to withhold aid to the Ukraine, if they did not do what he wanted to do, which was get rid of the prosecutor. Now different situation. Obviously Biden wanted that prosecutor out as did Republicans, as did other Democrats, as did other countries as did the U N because they weren’t investigating corruption thoroughly enough that actually hurt the company his son was working for. So the other side is if he did though threatened to withhold the aid if they didn’t do what he wanted. Uh, it gets a little dicey there with Trump’s, there’s no question, there’s no question that there was a quid pro quo.

And we actually found that out last night with the release of those text messages, the text messages between an ambassador, the state department and officials from Ukraine, where they explicitly talked about the fact that they needed to do what Trump was asking them to do with regards to an investigation and digging up dirt. And the state department said Trump wanted something deliverable, which would be the tangible receipt of something that would therefore violate the campaign finance laws. But he wanted the deliverable and if he didn’t get it, they weren’t going to get the aid. That is 100% of quid pro quo. The Biden thing, little more iffy, but either way, Trump calling on these other countries to investigate Biden is not only election interference, it’s going to the wrong people. What Biden was accused of doing by Donald Trump happened here in the United States. This is a matter that the United States would need to investigate.

Ukraine is actually not even involved in that. Neither is China and I don’t think enough people understand that, but that’s because the media is lazy. They haven’t told the full story and they’re too focused on the fact that Donald Trump is once again committing crimes wide open, like out there in the public. So, yeah, it’s a little easy to get distracted by that, but we also have to focus on the fact that no Biden nor his son, nor any other member of his family have actually been accused of committing a crime in either the Ukraine or in China.