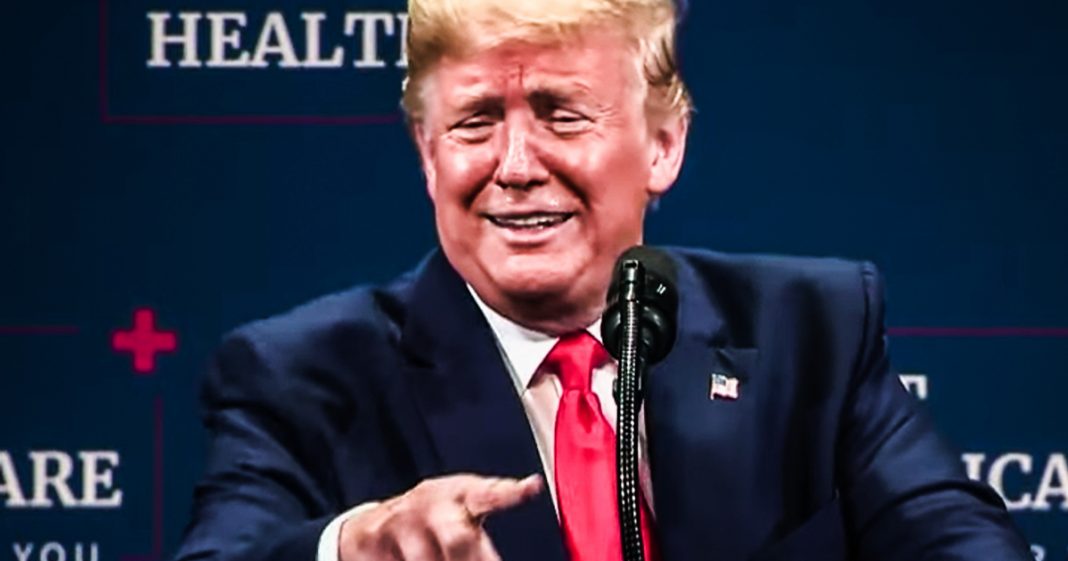 During a campaign speech at The Villages in Florida, Donald Trump again repeated his calls for a state-run media (propaganda) network, and said that his administration is actively looking into this. He apparently doesn’t realize that Voice of America is a government-run media outlet, not to mention the fact that he has Fox News and other right wing outlets currently acting as state media. Ring of Fire’s Farron Cousins discusses this.

Last night, Donald Trump gave a speech at The Villages in Florida, a bunch of, you know, upper middle class to upper class folks, uh, down there in Florida. And he suggested that the federal government needs to start its own propaganda network. Now I’m going to read the exact quotes here from Donald Trump. Bear with me because it doesn’t make any sense and it’s difficult to read because he can’t string a sentence together. But these are the exact quotes Donald Trump said at The Villages in Florida on Thursday evening, October 3rd. Here it is. CNN is a voice that really seems to be a voice out there and it’s a terrible thing for our country and we ought to start our own network and put some real news out there. They are so bad for our country. They’re so bad for our country. I go out there and they say, boy, the media hates your country. And it’s just a shame. It’s just a shame. And we really are. We are looking at that. We should do something about it to put some really talented people and get a real voice out there. Not a voice that’s fake.

That was rough. Honest to God, that was tough to get through because the president right there in the quote, I just read word for word, I did not screw any of that up. By the way, those parts where I repeated myself, it’s cause moron repeated himself, um, wants to create his own media outlet cause he doesn’t like the other media. And he says CNN as a voice that’s out there and they seem to be a voice that’s out there, whatever that means. But the rest of it is just gobbledygook. I really, that’s the only way to describe what the president has said here. There’s a lot of words in there, but he doesn’t actually say anything. And honestly, if you go back through any Trump’s speech, any Trump rally, look at the transcripts. That’s what he does. He says a lot of things without actually saying anything.

It’s just random assortment of words. Sometimes loud words, sometimes quieter words, sometimes words where he looks around like this after sometimes he claps for himself after these words. But they all mean nothing but the morons, they mean everything. And I’m sorry, but I’m not going to sugarcoat it anymore. If you can listen to the garbage that comes out of his mouth and still say, that’s my guy. You’re a moron. You are sorry. It’s just the hand you’ve been dealt. But back to the media outlet issue, right? Uh, we already have a government funded media outlet. It’s called voice of America, and voice of America got on Twitter after the speech to remind Trump that, Hey, we exist. We’re nonpartisan. We’re funded by the federal government. And we’re out there reporting on the news that’s actually in the white house. But if Trump wants more of a propaganda outlet, you already have that too.

You have Fox news, you have Breitbart, you have daily color, daily wire, you have all of those sites. Those may not be funded by the federal government, but they’re doing exactly what you want them to do. They’re out there spreading your propaganda in lies every single day with the sole purpose of misdirecting the American public. And that’s what Donald Trump wants, because that’s exactly what propaganda is supposed to do. Convince you of one thing, even though there’s no evidence to support it, get you to hate good things, but like the bad things, like hate things like Medicare for all or debt free college, like things like cutting taxes for the wealthy elite, a part of the country that you will never be a part of, but they convince you that someday you will. That’s how propaganda works. And Donald Trump wants the federal government to start sponsoring it, but again, there’s really no need for it. As long as these right wing outlets like Fox news exist, Republicans will always have a state media propaganda outlet to turn to.