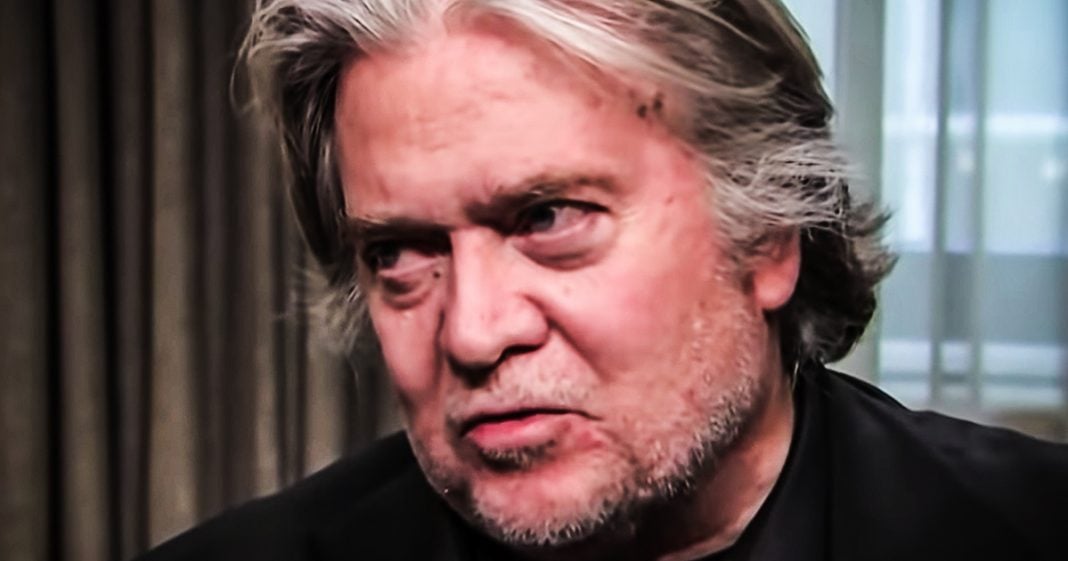 Former Trump aide Steve Bannon says in a new book that there’s no such thing as “the Deep State,” and that the entire conspiracy theory about a deep state plot to remove Trump is absolutely bogus. This is a huge blow to Republicans and right wing media outlets who have been talking nonstop about a “Deep State Coup” against the President since day one. Ring of Fire’s Farron Cousins discusses this.

I also want you to know that I think you’re a nutcase, but, but Steve man, and also who thinks that you’re a nutcase and he’s been a part of it. And he helped propagate it through both Breitbart and his time with the Trump administration. Steve Bannon was pushing this “deep state” narrative, which he freely admits. He also admits it was a complete lie. It’s false fabricated. This is not the first book where Steve Bannon has made this claim. There’s also a book “deep state”, uh, written by Corey Lewandowski and David Bossie where they were interviewing Bannon talking about the “deep state” and how horrible it is. And Bannon said, you do realize that none of this is true.

So now we abandoned on multiple occasions telling us that this whole “deep state” lie is not real. And what Bannon goes on to say in the new book is that, you know what? There is an intense bureaucracy in DC. It’s complicated, it’s complex. There’s lots of levels and layers to it, but it’s not a conspiracy. It’s not a “deep state”. There’s no coup taking place to remove Donald Trump from office, and that’s coming from Steve Bannon himself. That’s a pretty damning indictment and that should say something to everyone out there who keeps talking about the “deep state”. “deep state” isn’t real folks. Yes, we have intelligence agencies. Yes, they do things that we don’t know about, but overthrowing our own government isn’t one of them. And here’s the thing. These conspiracy theorists out there, they create conspiracy theories to explain things that they don’t understand. It’s a coping mechanism for them. It’s the way to explain an unexplainable world. So they create these lies, these falsehoods. They know they’ve created it, but they invest so much of their time into the creation of this lie, this theory that they themselves begin to believe in it. I mean, it is a form of psychosis. They have created this alternate version of reality. They know they created it, but they get so invested in it that they believe this is the new truth and the reality where they had created this themselves no longer exists. It is a mental problem and it’s a problem. We should probably take a little bit more seriously in this country, get these people to help that they need, but for now, we need to put this “deep state” conspiracy theory to bed. It’s not helping anything. It’s making everybody look just a little bit crazier than they actually are.