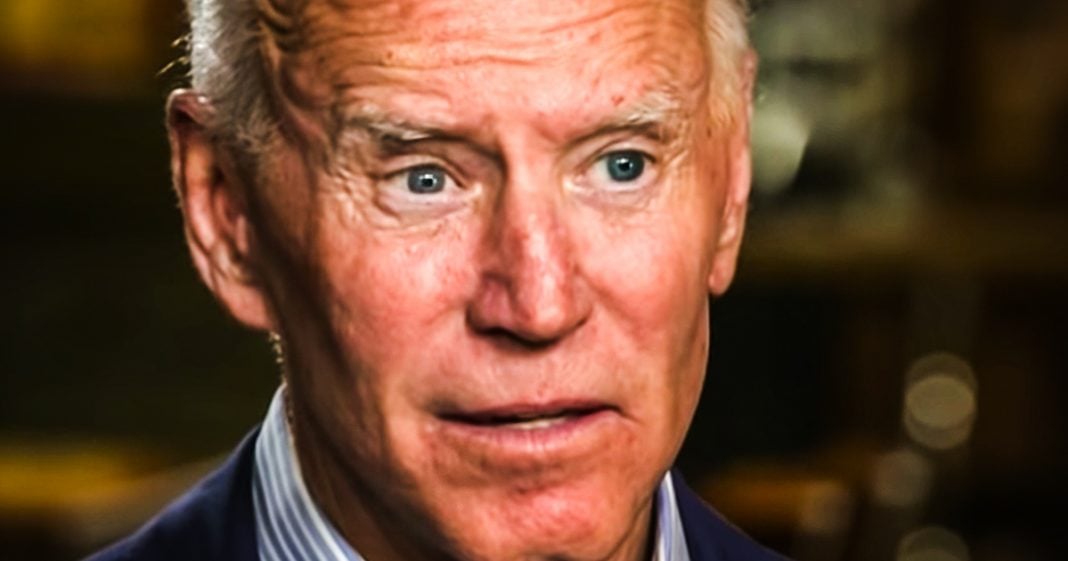 A resurfaced letter from 2016 signed by Senate Republicans shows that plenty of members of the GOP had Joe Biden’s back when he was asking for the chief Ukrainian prosecutor to be removed from office. This destroys one of Trump’s leading lines of attack against Biden, and helps to blow up the whole conspiracy theory. Ring of Fire’s Farron Cousins discusses this.

One of Donald Trump’s biggest attacks on Joe Biden, the one he thinks that’s really sticking with the public that’s resonating well and taking down Biden is the fact that Joe Biden was basically the guy in charge here in the United States demanding that Ukraine fire their prosecutor Shoken because he wasn’t doing his job. But according to Trump, he wanted him fired because he was allegedly investigating his son, which is not actually what happened yesterday. A resurface letter from the year 2016 emerged showing that, Oh, Joe Biden wasn’t the only one asking for this prosecutor to be fired. Now, we already knew that other countries had asked for the prosecutor to be fired. The UN had chimed in and said, you’ve got to get rid of this guy not prosecuting corruption. He has corrupt himself. And then a letter in 2016 signed by Republican senators Rob Portman, Mark Kirk and Ron Johnson called for removal of this prosecutor.

Democrats also signed it, democratic Senator Dick Durbin, Jeanne Shaheen, Chris Murphy, Sherrod Brown, Richard Blumenthal, all signed on to this letter, sent it over to Ukraine. Prosecutor respired roughly a month later. But this blows up that entire argument from Donald Trump that Biden was doing this to protect his son. You had Republicans in the Senate and Ron Johnson, by the way, has come out. So I don’t remember signing that letter. I don’t remember that. Kay will happened. Your names on it, your signatures there, you may not remember it, but it happened and if you can’t remember it then that’s probably a good sign. You shouldn’t be serving in the federal government anymore because your mind slipping a bit. This is hard evidence. Republicans were with the Democrats on this particular issue. So what now? Now we know this is, this is bunk. Well, unfortunately the conservative media isn’t going to talk about this letter.

They’re not going to give it the coverage that it deserves and they’re not going to mention the fact that no, Joe Biden did not do this to protect his son. Now that still doesn’t answer the question or address the issue of whether or not Biden engaged in any quid pro quo. I’m going to withhold your aid unless you fire the prosecutor. That could still be an issue for Biden and let’s be honest, that’s not a good thing to do. Anyway. The aide had been passed. I mean essentially Joe Biden did to a lesser extent what Donald Trump has been accused of doing, which I have discussed earlier. I don’t think what Biden did was technically illegal. Maybe it was, and if it was hell yeah, investigate, prosecute, do whatever you need to do. I 100% think what Donald Trump did was illegal. We have text messages to prove it, but now we also have an email for a letter from 2016 that proves the Joe Biden was not alone in calling for the removal of this prosecutor. It’s probably not going to stop Trump from using this talking point, but anytime anybody sees it, you need to throw this letter back in their face and remind them that there was pretty much global unity calling for this prosecutor to be removed and that is not a scandal. That is not illegal. This prosecutor was corrupt as hell and wasn’t prosecuting corruption because he was part of it. That’s the part. Republicans still seem to have trouble getting into their skulls.