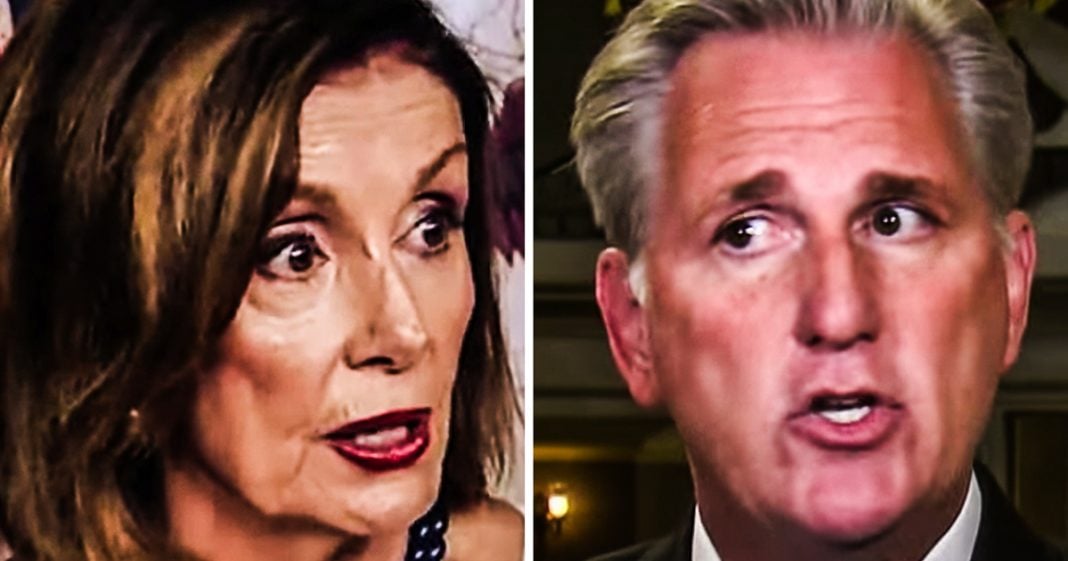 Republican House Minority Leader Kevin McCarthy wants to put the breaks on the impeachment inquiry until Nancy Pelosi agrees to let Republicans – and the White House – have more control over the process. While the rules for impeachment are a little blurry, there’s nothing that suggests that Pelosi has to play nice or let the White House be involved at all. Ring of Fire’s Farron Cousins discusses this.

Republican house minority leader, Kevin McCarthy sent a letter to Nancy Pelosi yesterday begging her to put the brakes on this impeachment inquiry until and unless she lets Republicans in the house of representatives and the white house itself have more control over the process. So the Republicans actually want the democratic majority to hand over a lot of the control over this whole impeachment thing. Just hand it over to the white house and us Republicans. You can totally trust us, right? It’s not like we just spent the last two years protecting Trump, obstructing other investigations, burying other investigations, allowing his kids to testify off the record where nobody could hear it. Yeah, we’re totally believable that we’re going to handle this impeachment inquiry with all the due process it deserves. In McCarthy’s letter. Uh, he said, uh, the democratic majority needs to put each subpoena request before he full committee vote.

Give ranking committee chair subpoena power and allow the president’s counsel to take part in all depositions, cross-examined and recommend witnesses and present or object to evidence. Now for that last part where he said the president’s council, which would I guess be Rudy Giuliani. Um, this isn’t a trial. The trial happens in the Senate buddy. I would think as somebody who’s been in the house of representatives, as long as you have Kevin, that you would know that the white house does not have any right to do any of this. They don’t have any legal right to do any of that. They’re not allowed to present evidence or object to evidence. They’re not allowed to cross examine witnesses. This isn’t the trial. This is the inquiry at the moment. And if impeachment happens, that’s a simple houseboat up or down. That’s what happens. Then it goes to a trial in the Senate and that is where the president can bring in his incompetent lawyer, Rudy Giuliani and do all the things that you’re asking him to do.

And that’s going to be even worse for the president. But no, Mr. McCarthy, I’m sorry, but you don’t get a say. You can vote that that’s part of your job. You get to vote, but you don’t get to boss Nancy Pelosi around and tell her what she needs to be doing here. Nancy Pelosi is finally doing what she is supposed to be doing. And that’s not listening to idiots like you. Now, on the same side, I wouldn’t be surprised if Nancy Pelosi did somehow cave on a little bit of this and say, okay, Republicans will give in to your demands. We’ll put this, uh, subpoenas before committee votes. We’ll make sure you get access to everything, but you’re not going to let Rudy Giuliani rock into my chamber and try to obstruct this investigation because that’s not what happens. Now, the rules for impeachment are very vague and they were deliberately written, vague to pretty much allow for whatever the house of representatives wants to do. It’s the Senate where the real accountability takes place. You know, it essentially at that point becomes a courtroom and this becomes a trial. But in the house, pretty much the wild West, no holds barred. Whatever the house speaker wants to allow gets allowed. And at least for the next year and a half, the house speaker’s going to be Nancy Pelosi. So Kevin McCarthy buckle up. It’s going to be a very uncomfortable ride.