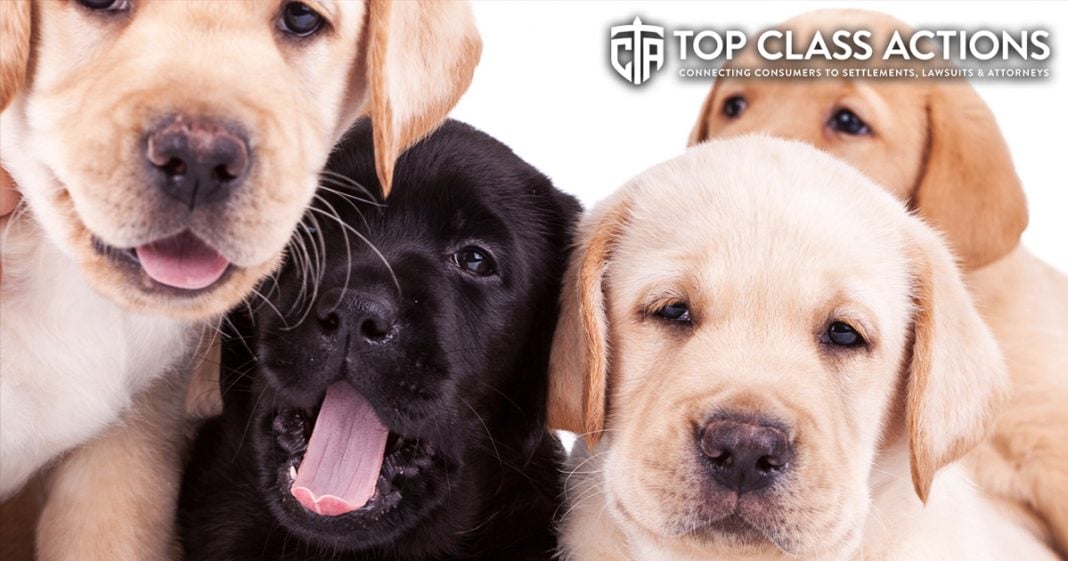 A group of Maryland pet stores have filed a class action lawsuit against state officials over claims that an approaching ban on selling cats and dogs in retail locations is unconstitutional. The pet sale class action lawsuit was filed by Just Puppies Inc., Charm City Puppies & Boutique, Today’s Pet, 2 Mile Kennel, and Pinnacle Pet. The puppy retailers claim that although the law was intended to protect animals, it will actually increase unregulated sales of pets, to the detriment of pet owners and the pets themselves. Ring of Fire’s Farron Cousins discusses this with Scott Hardy from Top Class Actions.

Farron Cousins:                  Most people in this country would probably agree that puppy mills, you know, any kind of mass farm that just sits there, having animals produce litter after litter is a bad thing, not just for the welfare of the animals, but for this country as a whole, for us being animal lovers. We don’t like the mistreatment of animals and that’s why you have some states out there trying to ban these puppy mills, but even though it may be the ethical thing to do, a new lawsuit says that it might not actually even be legal to do this.

Joining me now to talk about this is Scott Hardy with Top Class Actions and Scott, this is an issue that, yeah, I mean on the surface it seems to make a lot of sense. It’s very ethical, like, yes, let’s get rid of the puppy mills. But then you have the pet stores and not just the big chain ones that are really the big culprits here, but local pet stores in certain areas, specifically Maryland who have now joined together suing the state because of the puppy mill ban that’s about to go into effect. What’s their argument here?

Scott Hardy:                          Well it’s, it’s a couple of points and they actually, as you said, it’s, it’s interesting from the common perception of hey, you should adopt, you know, don’t shop, adopt, find a rescue, get the dog that you want. There are so many rescues out there for every breed you can find what you need. But the simple fact is people will still reach out to breeders directly. People will still go online to craigslist or other places and find a dog who they think is actually coming from a reputable breeder. But unfortunately, you know, all they’re going to see is that dog, you know, little kennel out on the front green grass.

They’re not going to see the potentially, you know, dozens or hundreds of other dogs back in the farm that’s living a terrible life. And so what these stores are essentially saying is that yes, we want more dogs to be rescued. We want more dogs to be adopted. But what you’re doing is you’re forcing consumers and forcing pet buyers and puppy buyers to go into the back alleys of consumerism to find their dogs while we, a responsible pet shop actually look into every single breeder we work with. We make sure that breeder is registered.

We make sure the dogs are healthy, we stand by the dogs. If you make it so that we can’t use reputable breeders anymore and that we are not allowed to sell dogs anymore, then people will just be going by, you know, online and finding these puppies from backyard breeders, these people that don’t know what that they’re doing. You know, inbreeding is a huge problem with puppy mills and backyard breeders. I’ve got a friend that just got a beautiful little black lab puppy instead of adopting through a, a shelter and that dog is having massive health problems. She’s already racked up a few thousand dollars in emergency vet bills. And of course the breeder’s like, oh, not my problem.

You know, and so that’s really what the pet shops are coming out here and saying is that hey, we’re, we’re doing the right thing. We’re trying to be responsible. We’re trying to safeguard consumers and you’re going to force people to go and buy pets from disreputable breeders that are going to be abusing dogs.

Farron Cousins:                  And the pet stores in this Maryland class here, they’re saying, listen, we use USDA government approved breeders. These breeders are registered. They have been inspected. You know, the dogs are, are certified. We know that everything with our dogs is ethical. We are not using these big puppy mills like places like Petland have been accused of using. We’re using people that we know of that have been inspected. They are ethical, they’re doing the right thing. But this piece of legislation was written with such broad language that it would essentially ban that because it’s not going to allow these pet stores to sell cats and dogs.

So they have a very real case here. I mean, this absolutely would destroy their businesses. I mean, I know pet stores sell other kinds of animals, but let’s be honest, you go to a pet store to buy a puppy, it’s no longer, you know, 50 bucks, a hundred bucks, you’re spending thousands of dollars for these dog breeds. You know, whether it’s a golden retriever, an English bulldog, I mean $3,000 to $5,000, at least down here in my area.

And we live in an area where that’s a heck of a lot of money. So I can’t even imagine how much they are at other places. So yes, this is going to hurt them. You’re, you’re not gonna make enough money selling lizards and birds to stay afloat if this thing goes into action. But again, you run into that ethical conundrum. Is it ethical to shut down puppy mills? Yes. Is it legal? That’s the question that still has to be answered.

Scott Hardy:                          Right. I mean, it looks like, you know, these pet shops are saying, hey, the onus should be on the government here. We were, as you said, we’re following the USDA guidelines. We’ll do everything we can. If the government is not identifying these breeders as actual puppy mills and shutting them down, that’s not our fault. We’re doing our job here. The government needs to do, needs to do their job and regulate effectively. And unfortunately, you know, even though we continue to push the, the adopt, adopt, adopt mantra, some people won’t.

And frankly, you know, adopting is quite expensive as well. You know, we got our dog Barkley from a local rescue. Barkley was 400 bucks. And I said to the, to the rescue, I said, well, what the heck? I thought I’m adopting. I’m actually, you know, doing something good. And she said, well, you are, I got to charge you $400 for this puppy because the other dogs here that I’m literally giving away, will be here for a long time. I said, okay, that makes sense.

But you have these, you know, these puppy mills out there and these shops that are just saying, listen, we’re trying to do everything legal and by forcing us, mandating that we can only sell or we can only use rescue dogs, we’re not going to be able to, like you said, might, might, might not be able to keep our doors open, but it’s not going to stop puppy mills. It’s not going to stop illegal breeders. It just makes people who want to use those breeders go into the back, into the back alley of the Internet and find them instead of hopefully having a way to get a healthy animal that is exactly what they want through a reputable store.

Farron Cousins:                  And I don’t know if people realize this, but you can actually get online, excuse me, and you can find websites that will find you the exact dog you want and that dog may be 2000 miles away. So they charge you, you know, a lot of instances, sometimes they do come from puppy mills, so they just charge you the shipping of the dog where they put the dog in a crate, they stick it on an airplane, you just go pick it up at the airport, whenever you reach this agreed upon time. So people are going to find a way to buy these animals from the puppy mills. And that’s, not only is that still perpetrating the problem or perpetuating the problem, excuse me, but now you’ve also shut down these other businesses that were doing it in the right way.

So I think they’ve got a real case here. I think they’ve got a very strong argument, but again, it’s still awful that we can’t shut these puppy mills down while at the same time protecting these people who are doing everything ethically and correctly, and they still somehow get, get vilified for, for doing that because people automatically assume you’re a pet shop, you’re taking the puppy mill puppies. And that certainly is not, not the case with every pet store in this country, is it?

Scott Hardy:                          Exactly. A lot of these pet stores are really focused on taking care of their customers and making sure that all of the pets that they are selling are ethically sourced, so to speak. You know, that they’ve, they’re following all the right guidelines and they’re just trying to be good entrepreneurs and supporting the local community. So by mandating that pet shops cannot sell puppies from reputable breeders, that really does hurt businesses. And while you would think by mandating puppy shops or pet stores can only sell or connect rescues or the humane society that just pushes everybody else who was still, no matter what, going to buy that purebred puppy out into the dark and hurts these stores who are trying to do the right thing.

Farron Cousins:                  For more information about this issue, please follow the link in the description of this video. Head on over to Top Class Actions and while you’re there, make sure you subscribe to their weekly newsletter. Scott Hardy with Top Class Actions. Thank you very much for talking with me.