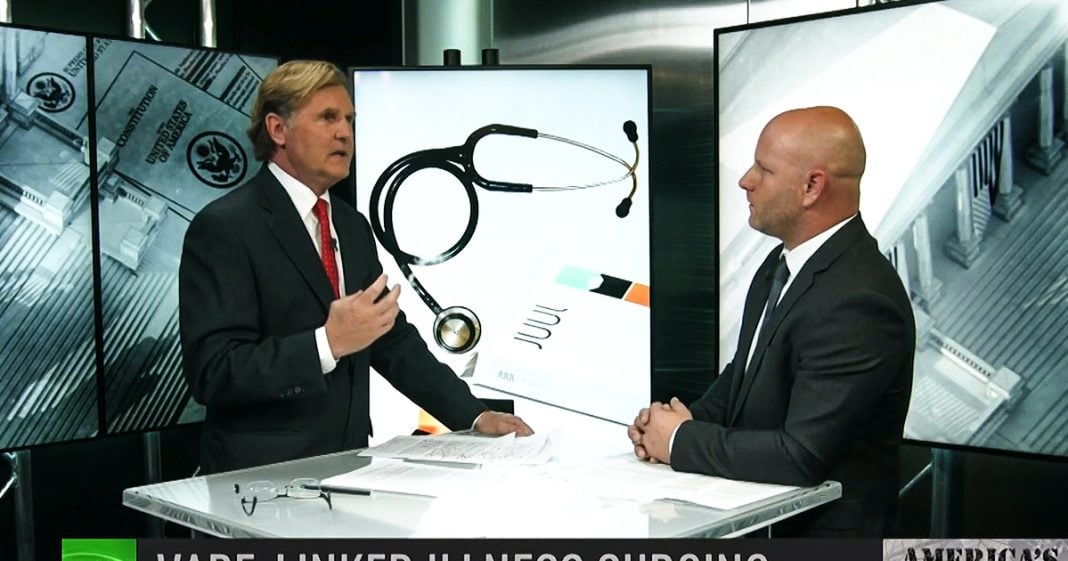 Via America’s Lawyer: Mike Papantonio and Trial Lawyer Magazine editor Farron Cousins discuss the ABYSMAL regulation of e-cigarettes. How do we hold both manufacturers as well as mom-and-pop shops accountable for the deaths of over a dozen and the sickening of hundreds linked to vape products?

Farron Cousins:                  I think the vaping ban is a bad idea and we look, we know, you know, I know everybody knows that, yes, the vaping companies are marketing these flavored products that they’re trying to ban. They’re marketing them to children. There is no question about that and something should be done about that, but outright banning these things is an absolutely bad move. It’s addressing a problem that’s not related to the actual problem. The problem is you have hundreds of people getting ill. We don’t know why. Nine people are dead.

Farron Cousins:                  Because there’s no regulations. That’s the problem. There’s no regulations in this industry whatsoever. We don’t know what people are putting in here. The FDA does not have any kind of set standards as to what can go in a vape. Not to mention the little vape shops that pop up on the corners, they’re putting, God knows what in there because nobody’s looking over their shoulders.

Mike Papantonio:             Okay. We got, you got an, you’ve got an organization that is completely dysfunctional. If you believe the FDA is there to protect you, you are in la la land. So the FDA watches this develop. Even in the early times, people are saying, look, there’s no regulations. People can put whatever they want in here. They can have whatever device they want to deliver it. It can be something that’s leeching lead into the human body, leaching pesticides into the human body. It’s releasing E acetate in the human body. All these things.

Now I’m not suggesting, you know, we handled the tobacco litigation and the, we, we launched that case right at this law firm years ago and we saw all the documents and I can tell you this stuff that’s in tobacco is a lot worse than this. No question about it. But don’t you get to the point where you want to say, look, yeah, we get that it’s a way for people to stop smoking, but we have to at least objectively talk about it. And the FDA has to regulate these mom and pop organizations that are making the delivery system, the pen.

Farron Cousins:                  Well, and people need to understand too, anytime you’re inhaling something into your lungs, don’t you want know what’s in that? I mean, rather than take some guy behind the counter, his word for it that, oh, no, no, no. I’ve just mixed up this fresh batch of it. No, that that’s what people are getting sick from. That’s why this all happens suddenly. That’s why people are dying. There’s obviously a bad batch of something out there in this country killing people.

Mike Papantonio:             Let, let me tell you where this case goes. This is my prediction. In a couple of weeks we’ll be in Las Vegas where we have our meeting of lawyers that handle complex cases and what we’ll be talking about is this isn’t a case that can be solved in one federal court. Okay. May be brought in one federal court, but there’s so many, there’s so many avenues to go after these companies. Take for example the, the pen itself, it’s got all these component parts. Each one of those component parts are made in different States.