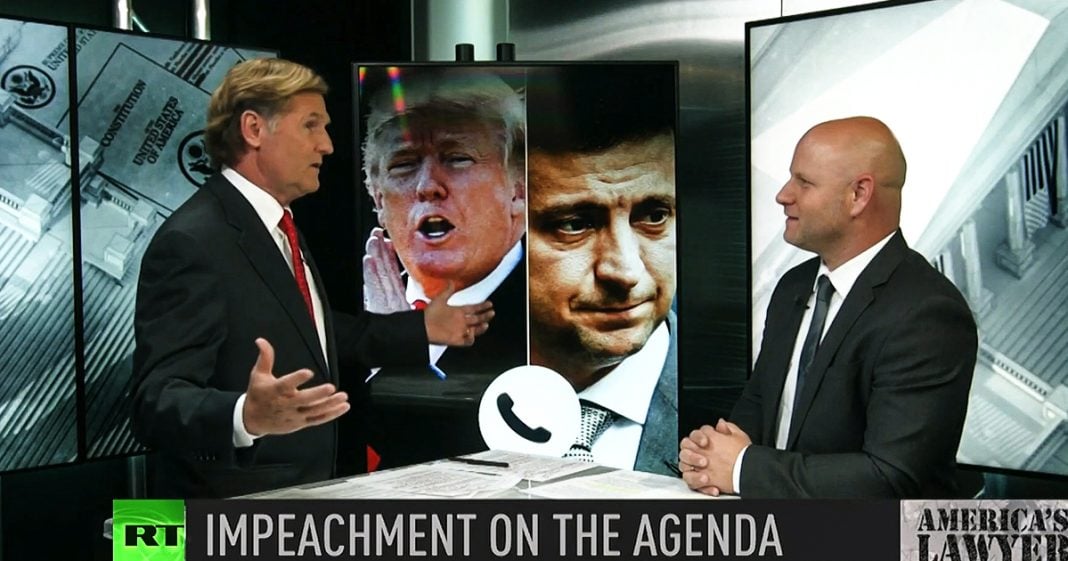 Via America’s Lawyer: Mike Papantonio and Trial Lawyer Magazine editor Farron Cousins take aim at the political fervor surrounding impeachment proceedings against President Trump. Many are quick to call Trump’s exchange with the Ukrainian President treasonous for urging Zelensky to investigate Hunter Biden, but were any laws actually broken during the now-publicized phone call?

Mike Papantonio:             President Trump is facing an impeachment inquiry by the House and the public has quickly warmed up to the idea. But the biggest question that people overlook is were any actual laws broken? Joining me to answer that question is Farron Cousins from the trial lawyer magazine. Farron, as I look at this story, it’s kind of the, you know, you see this hysteria, it’s almost breathless hysteria that the Democrats are now known for. You know, Maddow goes on this, on the screen and it’s all coming to an end. You know, or you know, you’ll have Joy Reed go on the screen and you’d think, oh my God, it’s over. You know, the, it’s a forgone conclusion. Nothing is farther from the truth in this story is it?

Farron Cousins:                  Well, you know, there’s lots of different pieces to it, especially at the moment as things are just in their infancy. But one of the things we have to look at specifically is what crime was committed? Is it a crime that’s actually impeachable? Is it a crime that’s part of the US code? Because not just for impeachment, impeachment, you can impeach on anything. Doesn’t have to be a specific crime, but if you’re going to sell it to the public, you’ve got to have something to convince them that an actual law was broken. And that’s where we’re kind of running into a little bit of a problem right now because even some of the most, you know, liberal legal scholars out there, have said, listen what he did, it was wrong. Probably an abuse of power. But was there an official statute that he violated? We can’t find one, but the abuse of power, again, that is enough considering what you need to meet the threshold for impeachment.

Mike Papantonio:             Yeah, so here’s, here’s what we’re seeing. This is not a Richard Nixon case. Richard Nixon, we could follow the money. Okay. He hires, hires these cats to break in, steal papers. You know, we, we know what happened. That’s, that’s a crime.

Mike Papantonio:             Actually, if you go back to the Clinton years where Clinton committed perjury, everybody knew that he perjured himself. The only thing that you had there was the crime of committing perjury and where did that go? As hard as the Republicans pushed, it really didn’t go anywhere. So all I’m looking at, I’m looking at this case and I’m saying, my God, I’ve seen this before with the Democrats. This setup to fail at a time when they need to be talking about real issues. The only candidate out there that’s talking about really issues is Elizabeth Warren. Okay. In my, in my estimation, now there’s other people talking, but they’re not, nobody’s paying attention to them.

But this is one where you, here’s, here’s what you have to overcome. You have to overcome this broad policy that the president can do, he can conduct foreign policy under article two. He has very broad policy and at any point they can fall back on that very broad policy. You look at it also, is that it, can this be characterized as a bribe? Probably not. Was there an exchange that you could characterize as a bribe? Truthfully, you could make the argument, but the chances of it ever really following is not going to succeed. Is it for business purpose? I’m going to, I am going down the checklist right here and you follow me.

Mike Papantonio:             Is it for business purpose? It, can it be characterized as a bribe? These are problems they can’t get past and they’re arguing. You hear, you know, this little character they call pencil neck. I’ll, I’m referred to him as pencil neck because I think he’s dangerous for the democratic party. He’s got the democratic party, you’ve got Nadler and the Schiff character that are driving the democratic party over the cliff because this is not going to go where the American public, the haters of Trump want it to go. And I’m no Trump fan now, let me be very clear. Every week we do a dozen stories about the problems with Trump. But I’ve gotta be honest about this. This isn’t going where it’s supposed to go.

Farron Cousins:                  Well, when you look at it in terms of, you know, the letter of the law, that is where things get a little cloudy. Public opinion in eight days, I think this has been going on, has shifted dramatically in favor towards this. So the Democrats have the wind at their back and I see them screwing it up so phenomenally because now instead of saying, okay, look, we may have him on an actual campaign finance violation for abusive power, for reaching out to this foreign country, not, not to kick start an investigation, but to get dirt on a political opponent. Now…

Farron Cousins:                  The, the whole Biden thing, that is a separate part of this as well, but this wasn’t to kickstart an investigation, I wanted to go after my opponent. But the Democrats by trying to also say, well, what’s in those Putin phone calls? What’s in those Saudi Arabia phone calls? You guys were handed the, the most perfect little setup here.

Farron Cousins:                  The public was absolutely at their back and they’re already blowing this eight days into it.

Mike Papantonio:             75% of the time it was, hate Trump. Did it work? No. All it did is polarized his people even more. So I, I don’t, as I analyze this, I mean, if I’m objective looking at this as an attorney and I, I’m just trying to analyze it, just like every other attorney that analyzes it, this is not impeachment material. They might find something else and I think that’s what they’re trying to do, find something else. The other problem is this, this opens up the Joe Biden story, which is a pretty ugly story. It’s a pretty story. If, if Hunter, his son actually, you know, working for this regime, working for this power company, if, if, if something was done on his behalf, Joe Biden is opening himself up for a big deal. Understand the guy, the oligarch that opened that, that, that owned this power company.

Farron Cousins:                  Well, well see and that’s an important distinction to make about the, the Biden aspect of this is that Hunter himself was not accused of doing anything wrong or improper.

Farron Cousins:                  And so I think people, I think people kind of misconstrued that a bit. But the issue with that is that did Biden actually legit threaten to withhold the money, which he actually, we know it’s on video.

Mike Papantonio:             He said he did. He goes on video and he says, I withheld the money because I didn’t like this prosecutor.