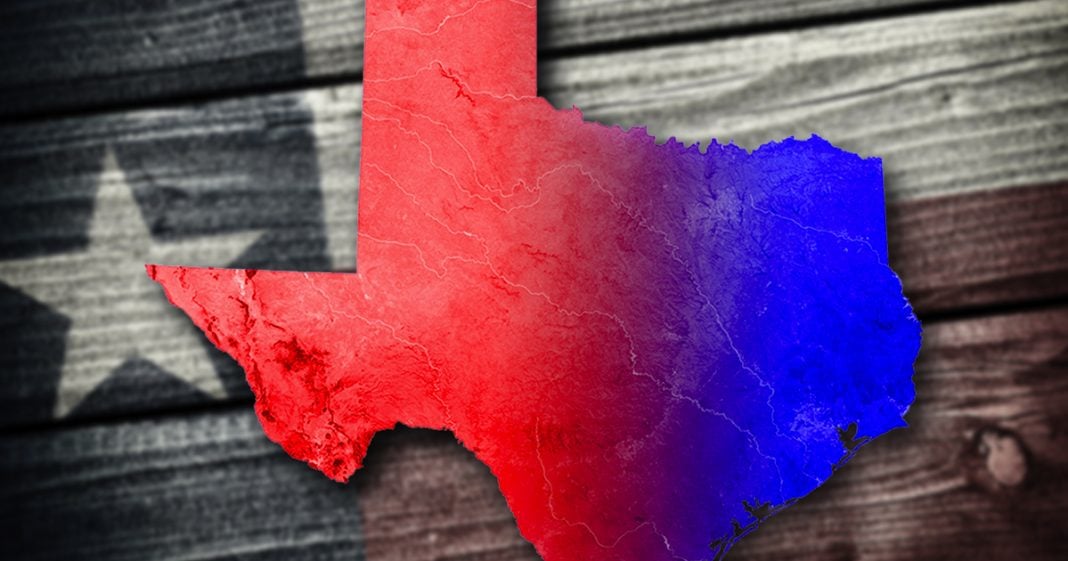 Conventional electoral college wisdom tells us that Democrats have California and Republicans have Texas, so each Party has at least one major electoral college state. But Republicans are starting to panic as they watch the demographics start to shift in Texas and they see the state turning more purple than red. As their base continues to shrink, Texas could likely become the biggest swing state in the country in the near future. Ring of Fire’s Farron Cousins discusses this.

For decades now. The story has been the same when it comes to presidential elections. Democrats have California Republicans have Texas. Those are the two biggest electoral college votes and each party, it pretty much gets one of them to kind of even things out, right? Well, unfortunately, according to Republicans down there in Texas, they’re concerned that those Republican electoral college votes in the future may not be as secure as the Republican party would like to think. According to a new report by Axios who spoke with Republican strategists down there in the state of Texas, things are changing the Republican strategist down, they’re freaking out over the fact that six Republican members of the U S house of representatives are resigning this year. They have decided they will not seek reelection in 2020 and that opens the door for Democrats to come in much like they did in house races in California that Republicans had held in 2018 and Democrats could take these over.

Those could become purple districts or God forbid, blue districts, and that is what is freaking Republicans out right now. Now, this doesn’t mean that in 2020 Texas is going to be a swing state, but 2024 2028 and so on and so forth. It could be Texas is currently on the way to being the biggest swing state in the country, which would be nice for me living down here in Florida. Maybe it takes a little heat off of us, but Republicans see what’s happening. In fact, one strategist said, we need a new Republican party because the one we have is getting our asses kicked in house races. It’s about as blunt as you can put it, but here’s the thing, the demographics in the state of Texas or are shifting, they’re changing, and I’m not just saying, Oh, we’ve got people coming from the Southern border.

No, you have more young people settling down there. You have people coming from other areas of the country that were more progressive down into red, Texas, changing in that red to a more purple color, and more importantly, you have the Republican base that is 65 years and older and they can’t live forever and they’re not, and that’s changing. The Republican party makeup, not just in the state of Texas, but all over the country. The Republicans have a very serious youth problem, and even though you’ve got the students for Trump out there and Charlie Kirk with whatever scam he’s running of the day, it’s not actually working to recruit more young people into the Republican party when your message is hate and division, while ignoring real problems like student loan debt, a rising healthcare costs and climate change, you’re not exactly winning any friends. And that’s what’s happening with the Republican party today. And it is especially obvious in the state of Texas now, some of these six seats that Republicans are vacating, the head of 2020 they could go to Democrats, they may not, they probably won’t, but those races are going to be far too close for Republicans to feel comfortable. Just like Ted Cruz is victory over Beto O’Rourke 2% two years ago, that had been unheard of. That wouldn’t have been possible. But it is today. Republicans see that and they know, even though they got that victory and maybe one of the last ones they ever get to celebrate.