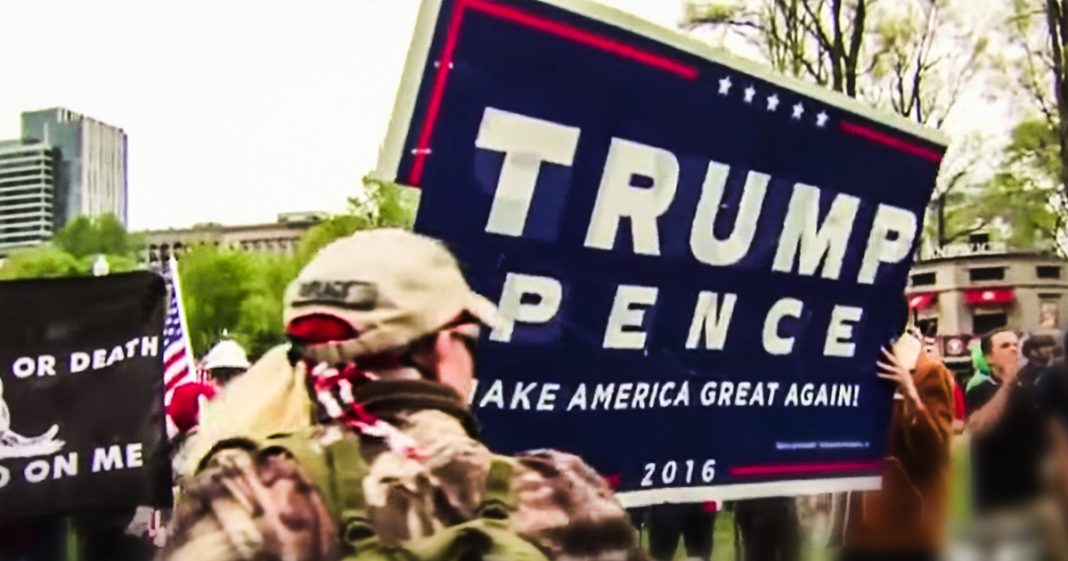 Several right wing militia groups are taking Donald Trump’s warning of a civil war if he’s impeached VERY seriously, and one group has posted on their social media account that they are ready to take up arms if the need arises. Trump knew exactly what he was doing with his statement, and this is the result that he wanted. Ring of Fire’s Farron Cousins discusses this.

Over the weekend, Donald Trump had tweeted out a tweet from pastor Robert Jeffery’s appearing on Fox news. Here it was, it was,

“….If the Democrats are successful in removing the President from office (which they will never be), it will cause a Civil War like fracture in this Nation from which our Country will never heal.” Pastor Robert Jeffress, @FoxNews”

And a lot of people obviously at the time, you know, kind of freaked out about this, Oh my God, Donald Trump’s calling for civil war, except again, and I kind of read it wrong with the wrong inflection. Let me repeat it.

“…it will cause a Civil War like fracture in this Nation…”

So even Jeffries, and I hate to even have to kind of defend it this way, wasn’t saying there’s going to be a civil war, it’s gonna be a civil war like fracture. And yet the country was fractured at the time.

But Donald Trump has not just in this quote, he has repeatedly warned that there would be civil war if he was impeached. This tweet in particular, just what knit. So I was content to let it go. I didn’t feel like jumping into this fray. That’s why it’s Thursday and I’m just now talking about it because there are some new developments with this. Apparently the armed right-wing freaks in this country don’t think it’s just an idle threat. They think it is a legitimate call to arms by the president of the United States. Here’s what the oath keepers, the far right militia group posted on social media. Here’s the money quote from that thread. This is the truth. This is where we are. We are on the verge of a hot civil war like in 1859 that’s where we are and the right has zero trust or respect for anything the left is doing.

We see them as illegitimate too. Okay? All right. Maybe that’s not necessarily a call to arms. You may say, well, let me continue with their follow-up post. The militia that’s us can be called forth to execute the laws of the union suppressants erections and repel invasions. All he has to do is call us up. We will answer the call. The oath keepers said they are ready for a civil war and that is why Donald Trump has repeatedly used that term when talking about impeachment, when talking about the Mueller report, when talking about anything that may remove him from office, he has mentioned civil war multiple different times and he knows exactly what he’s doing and he’s getting the results that he wanted because it’s not just the oath keepers out there. You also have the Minutemen project and the uh, United constitutional Patriots who when Donald Trump was talking about sending troops to the border, guests with these two groups did, they grabbed their guns against the law by the way, and went down there to the Southern border and they were going to shoot people as they crossed.

They were there to bolster ice. Even though that that’s illegal, you can’t actually do that. But they were ready to, they were there, they were armed and they were ready to pull the trigger. Just like what the oath keepers are saying today, these threats from the president cannot be taken lightly. It doesn’t matter if he’s quoting somebody on Fox news. It doesn’t matter if the quote wasn’t actually calling for a civil war. These groups don’t see it that way, and that’s why this is important. That’s why I’m talking about it today, because they are ready and they are armed and they will do anything to protect Donald Trump, even if it means an armed insurrection here in the United States, which they claim they want to fight against, but there is no insurrection happening. What’s happening is that we’re following the letter of the law for once in this administration. We’re getting to the bottom of things. We’re trying to root out and stamp out and permanently banish corruption, but that’s not how these people see it. They see it as an attack on their president who lost the popular vote by over 3 million votes, and they will do anything to make the Democrats pay for making their president look like the corrupt criminal that he truly is.