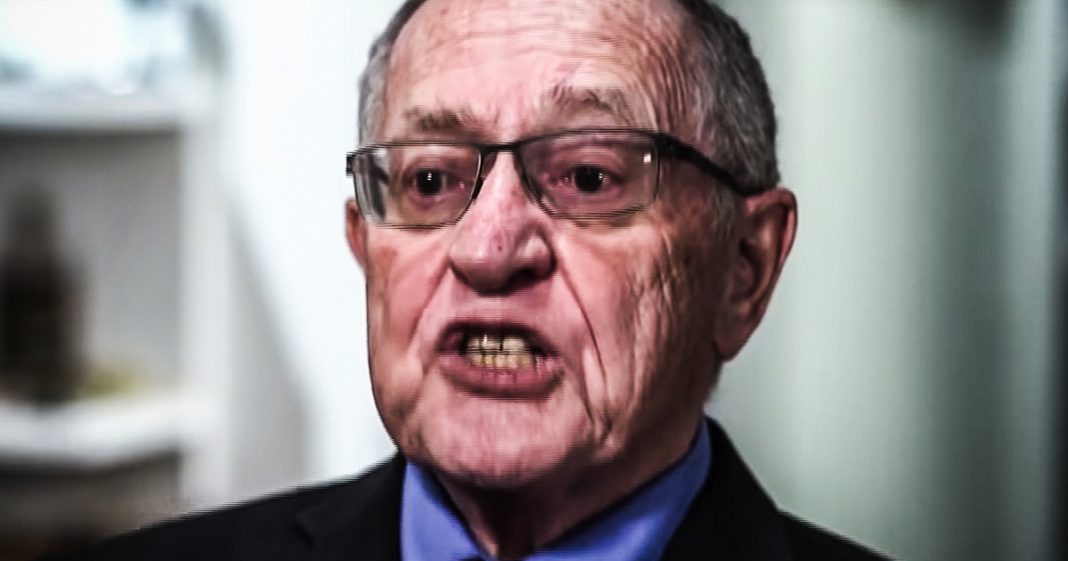 Alan Dershowitz has new book coming out soon titled “Guilt By Accusation,” where he laments the fact that powerful and wealthy men are being taken down by people accusing them of sexual misconduct. The whole book is an attack on the #MeToo Movement, and Dershowitz is all too familiar with being confronted by accusations of misconduct. Ring of Fire’s Farron Cousins explains why Dershowitz is on the defensive, and why the entire premise of his book is false.

Well folks that appears that Alan Dershowitz is pretty much the herpes of the legal world because just when you think he’s gone, Oh, he pops up again to annoy the hell out of everyone and remind us how horrible he truly is. This time he’s out there talking about a new book that he has coming out in the early November that’s titled guilt by accusation, the challenge of proving innocence in the age of #metoo. Now, Alan Dershowitz knows all about this because Alan Dershowitz has been accused, uh, by a woman by the name of a, uh, Virginia Giuffre who was recruited as a slave by Jeffrey Epstein actually by Ghislaine Maxwell on behalf of Jeffrey Epstein. Uh, and she claims that she was recruited at 17 years old, had sex with Dershowitz, had sex with a bunch of other guys, Prince Andrew among them. Uh, they’ve all denied it, but Dershowitz has a new book coming out dedicated not just to debunking this woman’s accusations, but to also defend all other wealthy, powerful men in this country who just can’t get a fair shake when it comes to the #metoo movement. And that’s the problem. Dershowitz because the fact that your book even exists at all shows that, yeah, you did get a fair shake. I haven’t seen this woman. The accuser pop up on cable news shows several times a week. I don’t see her with massive book deals being promoted by both newspapers and cable news outlets. I don’t see her resting and her multimillion dollar mansion hobnobbing with celebrities and other high price lawyers, but you are because you’re a wealthy, powerful man and you’re sitting there whining about the fact that people are paying at least a little bit of attention. They’re not even paying that much attention unfortunately to the accusations of this woman. This is the problem with these wealthy white men. They always believe they are the victims that they did nothing wrong, that their money and their power can get them out of any situation they may find themselves in and Dershowitz again, right now he’s only been accused. It has not been proven, but he felt the need so strongly to go out there and write an entire book about it and that shows you just how false his actual premise for the book is.

If he was guilty by association, nobody would be publishing his book. If he was in fact guilty by associate or by accusation, as his title says, he wouldn’t be on cable news. He wouldn’t be out there writing up EDS. He wouldn’t be talking to anybody because nobody would have anything to do with him. See, also Harvey Weinstein and Kevin Spacey, their careers are done and I’m not complaining about that. Dershowitz, you seem to be doing just fine and you have the largest microphone out of anybody involved in any of this. This accuser doesn’t have that kind of microphone. She doesn’t have a platform to go out there and write a book that’s already a, the publishers already ordered 250,000 copies of it. No, she’s not going to make millions off of something like that. But you are. You are, and that just goes to show you that your entire books premise is absolute garbage. If wealthy, powerful men don’t want to get accused of these things, don’t put yourself in those situations in many instances, don’t do them. But I got to tell you, Dersh, when you hang out with a convicted pedophile who’s got his own little “Pedophile Island,” the “Lolita Express,” which you were flying on all the time. Yeah. It’s going to raise a lot of eyebrows and it’s probably not going to end well for you.