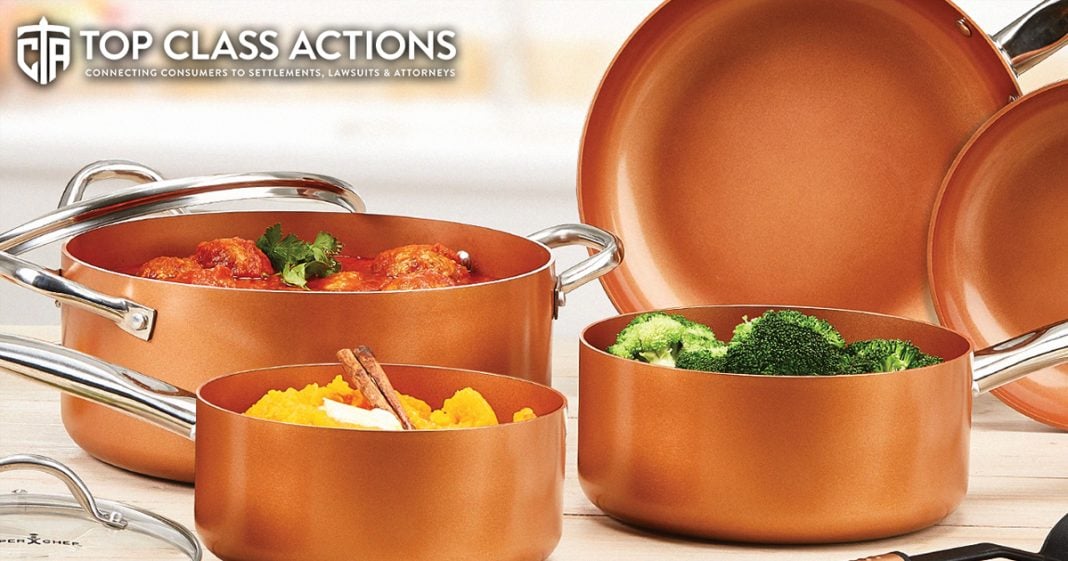 A class action lawsuit has been filed against Tristar Products by consumers who claim that their Copper Chef cookware is defective. Plaintiffs Marshall Slutsky and Glenn Graeves allege that Tristar Products market their Copper Chef cookware as having non-stick technology and their pans will never peel, scratch, or chip. In addition, the plaintiffs say that because of these claims, Tristar states that their pans will last a lifetime. Ring of Fire’s Farron Cousins discusses this with Scott Hardy from Top Class Actions.

Farron Cousins:                  I’m sure most of us have seen those infomercials with the copper pans. They show it burning cheese in it, frying eggs, whatever it is, it just slides around the pan, nice and easy. And these are really marketed as, you know, the next evolution of nonstick pans. But according, according to a new class action lawsuit, these pans are not living up to really any of the promises made in those infomercials. And I have Scott Hardy from Top Class Actions with me now to explain what’s happening.

So Scott, again, you know, we, we, we see the commercials, they, they literally in one of them are burning cheese right there in the pan. They tip it over, cheese falls out. They allegedly, they never chip, they never crack. Nothing bad ever happens to these pans. But if they do, there is a lifetime guarantee on them. Lawsuit says, yeah, none of that’s true.

Scott Hardy:                          Exactly, you know, we’re seeing these lawsuits against both Gotham Steel and Copper Chef and in both of these class actions, as you said, the, the commercials say, man, lifetime guarantee, warranty, any problems, we’ll take care of it. But unfortunately we’re receiving reviews from actually our viewers who have said, because we’ve received 63 comments and five almost 600 comments on the other class action here. And they’ve said if they experienced problems, oh no, they actually aren’t getting that promised service that they were expecting from Gotham Steel and Copper Chef and that the nonstick isn’t so nonstick, especially long terms.

You know, they put these pans on TV and show, make you think that they’re indestructible. But, you know, unfortunately that is just not the case. And if you’re going to buy them, you’re going to want to take care of them. And something that you and I talked before we actually went on air here, was a tip we received for one of the viewers was hand wash your pans. Whether, you know, if you want these things to last, even though they may say dishwasher safe, safe, hand wash your pans to help, you know, make them last longer and not get a white coating because there is aluminum in these pans, which can definitely suffer in a dishwasher.

Farron Cousins:                  You know, a couple of years ago, my wife and I, we, we got rid of all of our Teflon coated pans, you know, for very obvious reasons. And so we actually switched over to the copper pans. The pans I have my house now, they are the Copper Chef brand. You know, Copper Chef pans, you know, baking sheets. Everything in my kitchen right now is Copper Chef. And so I do have to say I, I’ve loved them so far, but the complaints in this particular class action, I have noticed some of these things, you know, the, the chipping, the scratching, which the commercial says is not possible. It does in fact happen. It hasn’t happened to all of our Copper Chef pans, but it certainly has happened to a few of them.

So right there, I mean, just from my personal experience, I can say yes, the, the chipping, the scratching does happen. Then obviously when you have an area of the pan that has those scratch marks, has the chipping on it, it’s obviously not going to be nonstick in those areas anymore. So, I mean, you know, from personal experience, yes, I can verify what they’re saying here is true.

And that’s just not happening. They’re just taking the money and then moving on. So even if they do have a good product overall, as you’re stating with the, the Copper Chef pots, then either back up your claims, make sure that you’re replacing them when needed or change those marketing guidelines and just stop promising the world and frankly not delivering on them.

Farron Cousins:                  And one of the problems we’re seeing too with this particular one is that the company when faced with these, you know, complaints from consumers, they’re trying to throw it back at the consumer like maybe you did something wrong, maybe you should have seasoned the pan. Okay, well your instructions don’t say I have to season this pan. It’s not cast iron. This is just a regular pan. I should be able to take it home, you know, wash it real quick and we’re good to go. So they’re, they’re trying to shift it back onto the consumer and I think we’re probably gonna see a lot of that as this goes on, especially with some of the chipping.

They’re probably gonna come out and say, oh, maybe you shouldn’t use a metal spatula, when in the commercial they actually take the metal spatula and just scrape it up against the pan, showing you that it’s not going to chip or scratch. And that’s actually one of the things that happened with mine. Used a metal spatula. It absolutely just went right across the top. So it’s gotta be interesting to see this thing play out because I think we’re going to see a lot more of this, oh, you did something wrong coming from these companies involved here.

Scott Hardy:                          Right. That’s just the, the common strategy that these big corporations use is they blame it on their customers. They blame it on their clients. They say you didn’t follow the instructions or you should’ve known better. In this case where they said, well, you should’ve known better. You should have seasoned the pan when that’s not actually specifically listed in the instructions. You know, stop blaming your customers and just take care of them. That way they’ll be like you, there’ll be big raving fans that say, hey, we like the product, but you know, we want everybody to use them. That’s, that’s going to be the better way of, of taking care of the situation, not getting a class action filed against you and having to deal with all of the flack that comes with it.

Farron Cousins:                  Absolutely. And for more information about this particular issue, follow the link in the description of this video. Head on over to Top Class Actions and while you’re there, make sure you sign up for their weekly newsletter. Scott Hardy with Top Class Actions. Always a pleasure talking to you.