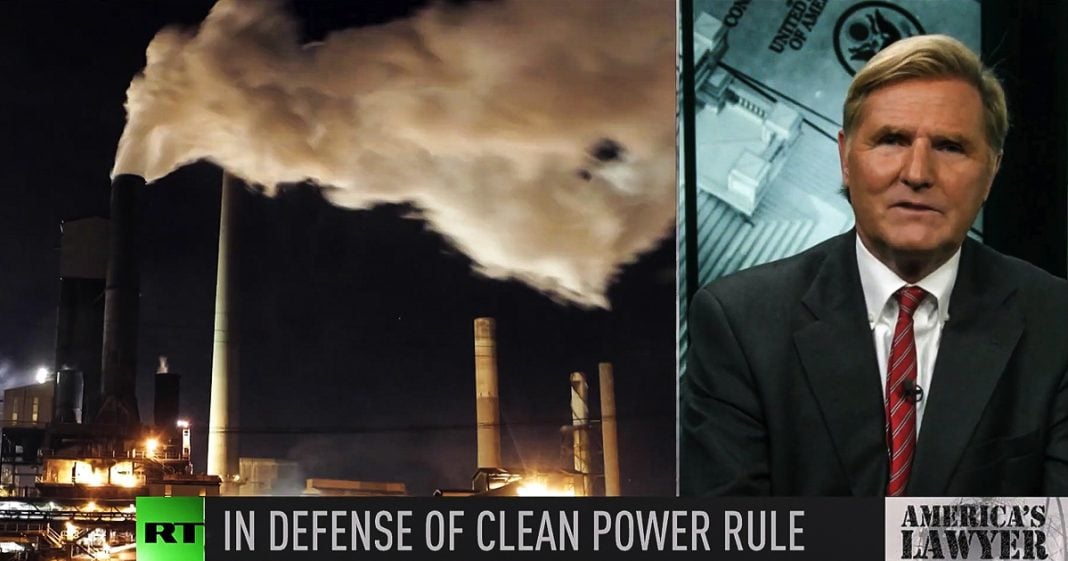 Via America’s Lawyer: A group of nine utility companies are fighting back against the EPA’s decision to roll back the clean power rule, arguing that the rollback will cause more pollution and harm in the future. Mike Papantonio explains more.

Finally tonight, some good news. We spend most of this show talking about corporations who harm consumers and destroy this planet one way or another, but in the past week, multiple corporations from all over the country have come together to do some good in the world. A group of nine utility companies are fighting back against the EPA’s decision to roll back the clean power rule, arguing that the rollback will cause more pollution and harm in the future. The clean power rule would have drastically reduced emissions from power plants, which are a leading cause of greenhouse gas emissions.

By repealing this rule, power plants are no longer bound to reduce emissions, but they also don’t get the government subsidies to help pay for things like greening their plants. Meaning the companies end up both paying and polluting more under the EPA’s new rule. Even if their motivations are somewhat self serving, these companies deserve credit for stepping up and doing the right thing, at last. The policies that they’re fighting against are going to cause irreparable harm to American citizens. And sometimes you just have to take a stand and you have to take a stand with those allies that you can find at the time. And right now, they’re are allies.

That’s all for tonight, but find us on Facebook @facebook.com/rtamericaslawyer. Follow us on Twitter @americaslawyer. You can watch all RT America programs on Direct TV, Channel 321 and stream those programs live at youtube.com/rtamerica. I’m Mike Papantonio, and this is America’s Lawyer, where every week we’re going to tell you stories that corporate media is ordered not to tell because their advertisers won’t let them. Have a great night.