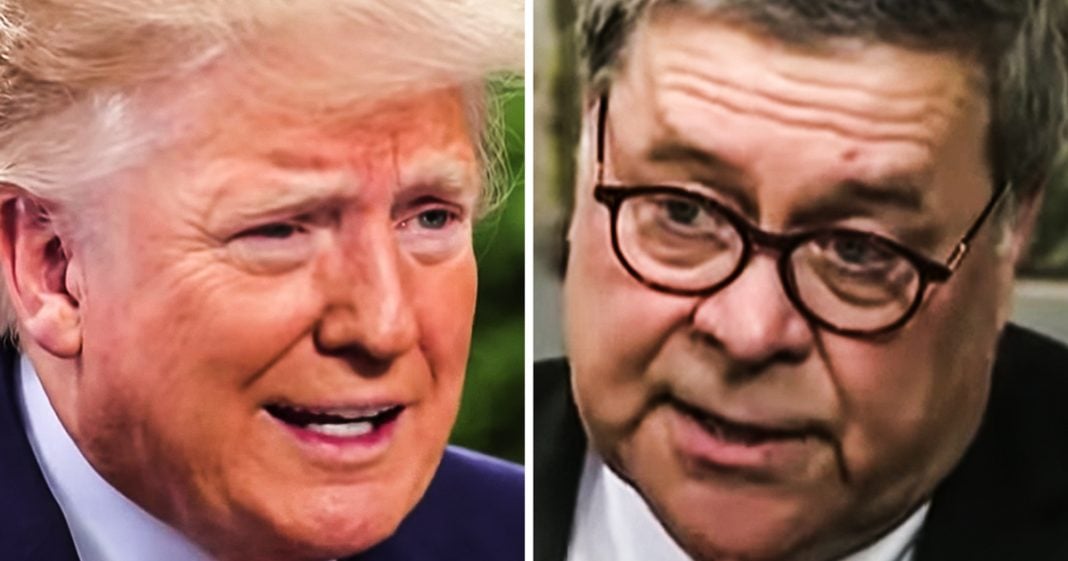 Donald Trump and his Attorney General William Barr have found themselves in a world of controversy over the past few weeks, but the bombshell reports on Monday about their efforts to solicit foreign countries to investigate US intelligence agencies may be the biggest blow to the administration yet. This administration is off the rails and they are terrified of their own shadows – something innocent people typically don’t have to worry about. Ring of Fire’s Farron Cousins explains what’s happening.

*This transcript was generated by a third-party transcription software company, so please excuse any typos.
Well news broke late yesterday evening, that attorney general William Barr had been reaching out at Donald Trump’s request to other governments and their, uh, intelligence agencies to get them to provide any information they may have on US intelligence agencies so that the Trump administration could then use that information to discredit the entire Mueller investigation. Last night, it was reported that a Barr had been speaking with the prime minister of Australia about this. But then a few hours later, more news broke saying, guess what, folks? It wasn’t just the one government, the Australian government that actually did provide evidence and documentation for the Mueller investigation. But apparently William Barr also made a trip over to a great Britain where he spoke with their intelligence officials about working with him on this little investigation he had going. And then he hopped a plane over to Italy. And, uh, met with their leaders and their intelligence officials about doing the same thing. William Barr, the attorney general of the United States at the request of the president of the United States. Donald Trump has been traveling the globe, trying to get other countries to investigate our intelligence community here in the United States for the sole purpose of undermining the Mueller investigation. Now, what’s odd about this is that as far as I knew Muller investigation was over, it did not lead to impeachment. It could have, it should have, but it didn’t. You know, Democrats aren’t sitting there harping on that every day. It’s not like it’s something that, uh, most people were thinking about on a daily basis anymore. W- we all moved on. We’ve got a brand new scandal with Trump and the Ukraine now, right? So why waste your time doing this? Because the president is still bitter. He is a petulant child and he’s not going to stop until he can claim that every single person that ever worked on any investigation against him was just a Democrat loving Trump hating bleeding heart. That’s what this is about. This is about revenge. It has nothing to do with this administration thinking there may have actually been something illegal about these investigations, which there weren’t. We already know that that conspiracy theory has been debunked. But the attorney general is working right now, basically acting as the president’s personal attorney to undermine the United States itself. You may not agree with these investigations. You may not like them, but at the end of the day, that is what they’re supposed to do. And yeah, guess what? Every human being has some kind of political bias inside of them that influences how they vote. And most of us leave it at that. And these people who are career officials within the CIA or the FBI who were doing these investigations, they didn’t do it because they hated you. They did it because it was their job. It’s not because they love the Democrats, it’s because they understand that they have a duty to the office that they hold. That’s where this came from, but not to the president, to Donald Trump. These people did it for one reason and one reason alone, and it’s because they hate him and he is not going to stop until he can smear each and every human being that ever worked on any investigation against him.