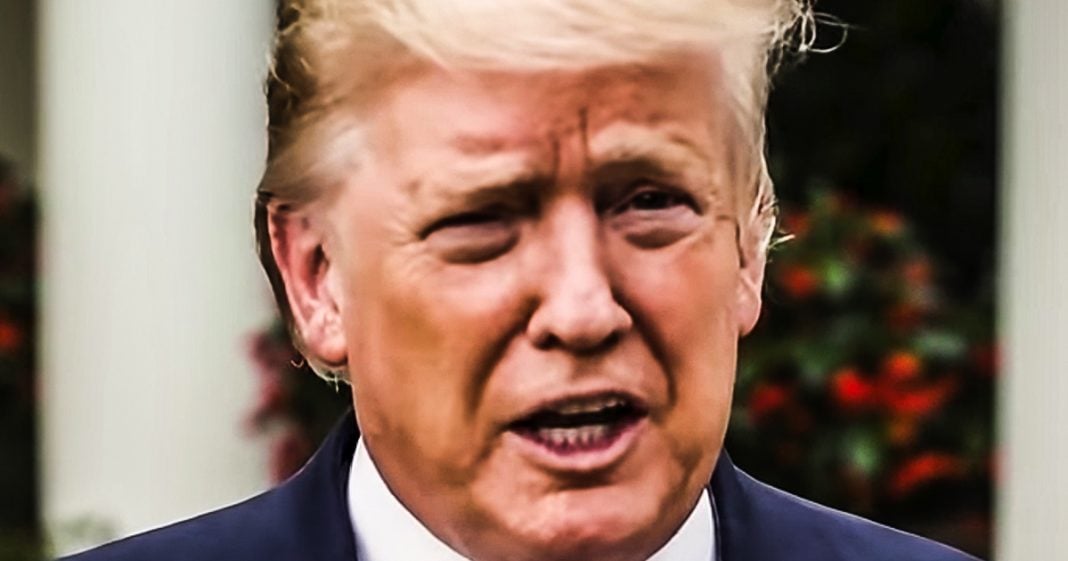 Donald Trump admitted on Monday that his administration is trying to uncover the identity of the whistleblower, a move that is 100% against the law. The Whistleblower Protection Act makes it clear that these kinds of efforts are illegal, so that’s another thing we can add to Trump’s list of crimes. Ring of Fire’s Farron Cousins discusses this.

*This transcript was generated by a third-party transcription software company, so please excuse any typos.
You know, the interesting thing about criminals is that they tend to keep breaking the law until they get caught and that is exactly what’s happening with Donald Trump right now. Yesterday speaking to reporters who made the following statement, he said, we’re trying to find out about a whistle blower. We have a whistle blower that reports things that were incorrect, as you know, and you probably now have figured it out. The statement I made to the president of Ukraine, a good man, nice man, new, was perfect. It was perfect, but the whistleblower reported a totally different statement. Like the statement was not even made, I guess statement you could say with call. I made a call. The call was perfect when the whistleblower reported it. He made it sound terrible. Wow. I would like to say that I screwed up somewhere in reading that transcript, but I didn’t. That’s word for word, exactly how the president, but the whistleblower reported a totally different statement. Like the statement was not even made, I guess statement you could say with co wow. But anyway, none of that is important to this story. The important part is the very first line that I read which says we’re trying to find out about a whistleblower, which in case you were unfamiliar with it is a violation of the whistleblower protection act of 1989 five us code two three zero two B eight dash nine that is the specific law that the president of the United States broke. With that comment, Donald Trump is trying to intimidate this whistle blower. He is trying to threaten this whistleblower. Last week he suggested that the person should be handled like we did in the old days with spies, which was to kill them and that’s what Donald Trump said should happen to this person. Then day and a half ago, he says, I deserve to meet with this person. I demand demand it, it’s my constitutional right, even though it is not, and now he admits that they are actively trying to uncover this individual’s identity. Either so that they can make this person’s life a living hell, or maybe they are going to handle it as Trump suggested or they’re going to dox them to and back via conservative media and speaking of conservative media. Actually hear something that doesn’t make sense about this. You know, the white house says, we’re out here. We’re actively trying to break the whistleblower protection act and find the identity of this a whistleblower. What hasn’t conservative media already told us that this whistleblower was an anti-Trump or like a hardcore Democrat, but they don’t actually know who it is. Like they don’t know who the person is, but they do know for certain that they’re a Democrat. That’s interesting, right? Because they’ve made that claim. They have absolutely made that claim and Trump’s out here still admitting we don’t know who it is, but we’re trying to find out. So by his own admission where he’s breaking the law also debunked what the right wing is saying that this is some kind of democratic plant because nobody knows who the hell this person is. But that’s just an aside. Hey, it’s great when you can debunk conservative media with their own talking points, right? The bigger issue is that Donald Trump is engaging in illegal activity again, because he’s gotten away with it for his entire life, and it took the Democrats too long to finally say, Oh, all right, now we’ll do an impeachment thing for you folks. They could have put an end to this a long time ago. Of course, technically the Democrats put it could have put an end to this a long time ago if they would have said back in 2015, Hey, Hillary, uh, it’s not your time. We don’t, we don’t want you running. I mean, that actually would have put an end to all of this before it even began, but they didn’t. This is where we are. They didn’t stop it earlier. And now we’re living in this world, this reality where we have a president who routinely breaks the law, casually breaks the law. Like it’s no big deal. And there aren’t enough people left in this country to continue to call him on it, let alone hold him accountable.