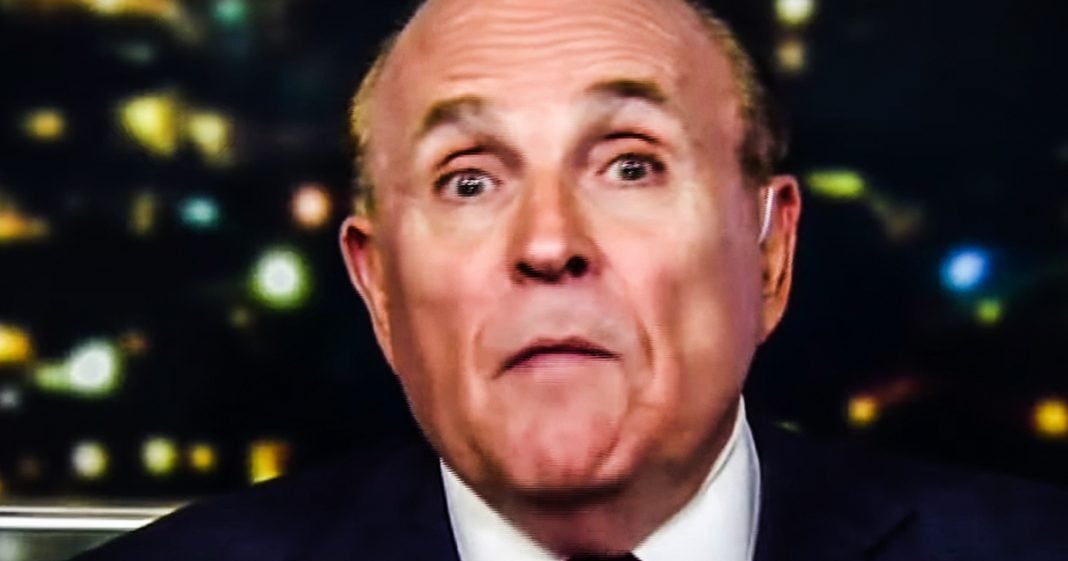 Donald Trump’s attorney Rudy Giuliani has finally been subpoenaed by House Democrats to turn over any and all documents that he has relating to the President’s efforts with Ukraine. Giuliani isn’t sure if he’s going to comply with the subpoena, and he claims that attorney-client privilege will likely prevent it. Ring of Fire’s Farron Cousins explains why that argument won’t hold up in court, and why Giuliani will ultimately have to answer the tough questions.

*This transcript was generated by a third-party transcription software company, so please excuse any typos.
Well, it finally happened in Democrats in the house of representatives from three different house panels. A committee, excuse me, have subpoenaed Rudy Giuliani, Donald Trump’s personal attorney, they’re seeking text messages. They are seeking emails. They are seeking any other electronic form of communication. Giuliani may have had that involves any conversation about the Trump Ukraine scandal. And Rudy Giuliani announced even before he got the subpoena that he was absolutely not going to work with the Democrats as long as Adam Schiff was still running the show from the house intelligence committee. But then yesterday he kind of softened his stance a little bit after the subpoena was announced and he said, Oh gee, I’d really like to uh, give you all of this info. But Hey, attorney client privilege. And I can’t, it’s what he said on Twitter. Uh, but Giuliani being an attorney who I’m assuming has gone to law school, I haven’t seen a diploma. So a little iffy on that, he should know though that attorney client privilege will not protect his communications because in a criminal matter, which is what this is, this impeachment inquiry is a criminal matter attorney client privilege goes out the window and all of those documents and communications that would have been considered off limits in any other situation on the planet. Suddenly there is no limit on them. Attorney client privilege goes out the door when you’re in a criminal matter. Giuliani as an attorney knows that, but he’s banking on the public not knowing it. That’s why he’s saying those things. He’s banking on the morons and Fox news to not explain Rudy that that’s not how it works, buddy. You don’t have it. They’re not. They’re not going to question it. They’re going to go along with it. Shake their dumb little heads. Yes, and move on to the next question. Giuliani cannot protect himself from this, but furthermore, Giuliani has already given us a hell of a lot of information that not only implicates him further in the scandal, but also corroborates part of the whistleblower story. When Giuliani last week tweeted out the screenshot of the text message between him and a Kurt Volker who resigned on Friday because his seat’s getting a little hot because of the scandal now, ah were Volcker introduced him to Yermack who was close to a Ukrainian president Zelinsky so they could arrange a meeting, we’ll meet and greet and that was specifically mentioned in the whistle blowers complaint and Rudy Giuliani tweeted out the screenshot of the text message somehow thinking that that was going to exonerate him when in fact it only implicated him further. But the bottom line is that Rudy Giuliani obviously does have this, uh, these communications, these documents that the Democrats want that are vital to this impeachment inquiry and he’s already released a couple through his own Twitter account. Why were those not protected by attorney client privilege? Giuliani? That’s what I would like to know. I mean, why did Trump not immediately Sue you for malpractice if in fact this was protected as you claim it is? Nothing about your story has held up Rudy. Everything you’ve said has been contradicted by something else that you later said or earlier said you cannot be trusted. You cannot be believed. And that’s why Democrats are more ah willing to get their hands on just your documents rather than making you come in and having a spectacle by testifying before Congress. That’s not going to end well for anybody, but it’s certainly not going to end well for you. That’s why they would rather see the electronic forms of communications. Find out who you were talking to, what you were talking about, where you went when you talk to them, so that they can make sure that the whistleblower complaint holds up and that every piece of it is corroborated. But so far, Rudy, you have done a phenomenal job of corroborating some very important pieces of that whistleblower complaint.