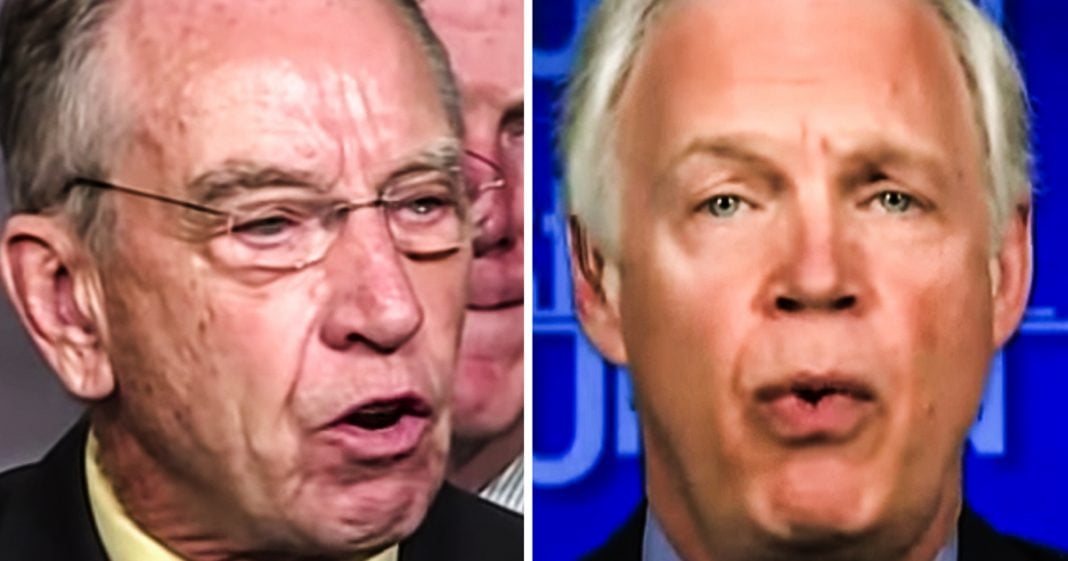 A pair of Republican Senators are asking Attorney General William Barr to investigate whether the Democrats were the ones who somehow conspired with Ukraine to take down President Trump. This scandal has reached a level of absurdity that I didn’t even think was possible, but here we are. Ring of Fire’s Farron Cousins discusses these latest accusations from Republicans.

*This transcript was generated by a third-party transcription software company, so please excuse any typos.
Republican senators, Ron Johnson and Chuck Grassley are trying to get to the heart of this Ukraine scandal. They have called on attorney general William Barr to open a full and complete investigation to find out exactly what the hell Ukraine was doing, working with the United States, trying to take down a political candidates rival Johnson and Grassley want that investigation to happen. Now you would think, wow, that’s good. We got two Republican senators on our side, but, Oh no, no, I wasn’t clear on that. They, they want Barr to investigate the Ukraine and their political meddling here in the United States, but, but not the stuff Trump asked him to do. No. See, Johnson and Grassley are asking William Barr to open an investigation because they believe that the democratic party somehow colluded with the Ukraine to dig up damaging dirt on Donald Trump ahead of the 2016 presidential election. That is the investigation that Grassley and Johnson want to happen today. And I wouldn’t be surprised if William Barr decided to go ahead and say, you know what? Sure, let’s do it. Why not? Those Democrats are dirty and we should just take them all down. Of course, none of it’s true. I mean, this is based on a very big conspiracy theory that Republican news sites have been pushing for quite a while, saying that, Oh, maybe Ukraine has Hillary Clinton’s 30,000 missing emails. Maybe we’ll find him over there, and it’s now evolved into the Democrats somehow colluded with the Ukraine to take down Donald Trump. These people are insane. They’re absolutely insane. That’s what’s happening with these folks, not just Grassley and Johnson. Yes, they’re crazy, but all of conservative media with these insane conspiracy theories trying desperately to pin something on the Democrats. I mean, before this, they were actually saying, no, no, no, no. The Democrats are the ones who colluded with Russia. They colluded with Russia. Conspired with them. Yes. They conspired with Russia to lose the 2016 election. Super smart. They’re playing like eight dimension dimensional chess there. The democratic party. No, none of this ever happened, but it’s not going to stop idiot brain dead conservatives from saying that it did. They’re going to continue on this track, distracting us from the real scandal that actually happened because they know their guy looks very bad. That’s why every time a Republican has gotten on TV in the last week, they have looked like a stumbling, bumbling idiot because they can’t string a sentence together to protect the president because there’s no, they know there’s nothing left to protect. There’s not a lie they can tell that’s going to convince everyone. The polls are shifting dramatically, daily in favor of impeachment. They have nowhere to go, so they’re going to their old standby right now. If we can’t defend the president, then we’re just going to try to take down the democratic party instead. Good luck with that. Not sure if you’re going to find any emails or any kind of scandal with the Ukraine and the Democrats, cause I’m pretty sure that as incompetent as the Democrats can be, sometimes they’re not in competent enough to conspire with a foreign power to lose a presidential election.