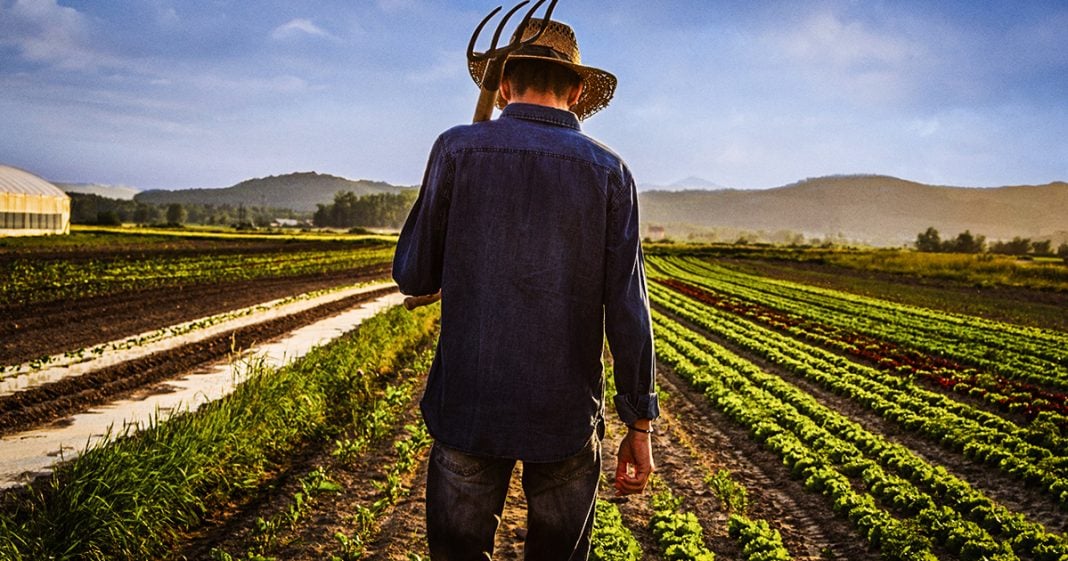 The number of farms that have gone bankrupt since Donald Trump’s trade war began has increased by 13% over the year before (prior to the tariffs.) More than 10,000 farms of all sizes have now gone out of business, and there is no sign of relief on the horizon. This is Trump’s policy, and he owns this economic destruction, as Ring of Fire’s Farron Cousins explains.

*This transcript was generated by a third-party transcription software company, so please excuse any typos.
We’ve been talking for a very long time here about the fact that Donald Trump’s trade war is absolutely killing American farmers and sometimes that’s actually quite literal because the rate at which farmers have been taking their own lives since the trade war began has skyrocketed and part of the reason for that is because bankruptcies among farmers has also skyrocketed. Earlier this year we talked about the fact that since Donald Trump’s trade war started, bankruptcies among farmers had increased by 8% well, we recently yesterday got in the new numbers that added a couple more months in there that we did not previously had when the number was only 8% and that number has now jumped to 13% in just 12 months. Between June of 2018 and June of 2019 bankruptcy’s among farmers in the United States increased by 13% over the 12 month period. Prior to that, during that time, nearly 13,000 American farms shut down, 13,000 American farms shut down. Jesse Higgins running for UPI explained it this way. There is always cycles in the farming industry. Some years, prices are low, some years prices are high and when prices are high and farmers make more money, they tend to set a lot of that aside for when prices are low. So they have that cushion and starting in about 2014 prices got low. So farmers had been, you know, subsidizing themselves with the money they’d put aside in 2018 prices started to go back up. So they were making more money until of course, that fateful day, July 6th, 2018 when Donald Trump announced the first tariffs on China, China retaliated and that sent those crop prices that were finally rebounding after a four year low, it’s sent them plummeting. So the farmers who had already exhausted all of that savings that they had had from the low years, finally thought, okay, now’s the chance we’re going to be able to build it back up. Thank God we have nothing left to live on. And then Trump personally, single handedly destroyed it for him. Then they had nothing, they had no more cushion. The prices did not go up as they were supposed to and they were not prepared for this cycle. so nearly 13,000 farms have shut down in the last year. 13% increase in the rate of bankruptcy among American farmers and the problem is still there. Yes. The little bailout we’ve given them has helped a little bit. They’ve said most of them didn’t get anything. Most of it is actually gone to the big factory farmers. You know, the Purdues out there. They’ve gotten a lot of money. The rest of them didn’t get enough to even scrape by, and this again is 100% on Donald Trump. Congress did not pass this. Congress did not vote on this. Congress didn’t have a say in this. Honestly, this wasn’t a left issue. This wasn’t a right issue. This is a Donald Trump issue and American farmers need to understand that the people, the person who did this to them is Donald Trump. He did this to you and you’re the only ones, the only ones who are in a position to do something about it and that’s something that you need to do is vote them out. That’s what it’s going to take. There is no relief in sight for these trade Wars. Most people, because of all the nonstop scandals from the Trump administration, seem to forget that they’re still happening. You know? And that’s what’s really frustrating about this. The media is hyperfocused on all the scandals right now, and they’re not talking about the suffering that his actual policies are causing American citizens. Yet here we are. Farmers are losing their jobs. They’re losing their identities, they’re losing their way of life. Their losing what has been built up in their family over generations, and it’s all because Donald Trump decided to get into a feud with a country that he can’t beat.