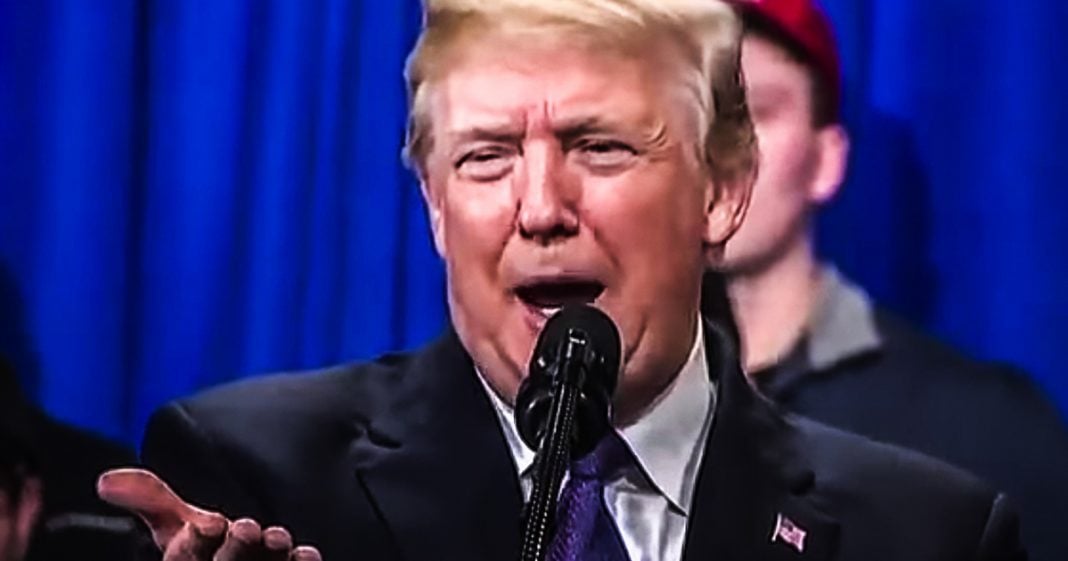 60 Minutes has reported that the whistleblower who exposed Trump’s actions with the Ukraine is now under federal protection because they fear for their life. Not only have certain right wingers offered huge cash rewards to expose the name of the whistleblower, but Trump also demanded that he have the right to face the accuser. Ring of Fire’s Farron Cousins discusses this.

*This transcript was generated by a third-party transcription software company, so please excuse any typos.
Last night, 60 minutes reported that the whistleblower who helped expose Donald Trump’s a request to the Ukrainian president is now under federal protection because according to the lawyers for this whistleblower, they now fear for their lives because of both the actions of Donald Trump and the actions of some ardent Trump supporters. Ah, right now you’ve got a couple of right wing groups out there offering $50,000 for anyone who can expose the identity of this whistleblower. That’s how anxious these Trumpers are to take this person down and make no mistake. That’s why they want to know who this person is. They want to either dox them and you know, post every embarrassing Facebook picture this person may have ever posted in their life, or possibly something even worse than just a showing us some embarrassing pictures of this individual. But none of that compares to what Donald Trump himself has had to say about this whistleblower. Obviously a couple of days ago, the audio emerge where Donald Trump suggested killing the whistleblower. You know, handling them like we did in the old days when we caught spies, which was to murder them. And that’s what Donald Trump suggested for this whistle blower. Then on Sunday, and this was after, uh, the whistle blowers, attorneys actually announced that he had been put or he or she actually had been put in a federal protection. Trump tweeted out the following. Like every American, I deserve to meet my accuser, especially when this accuser, the so-called whistleblower, represented a perfect conversation with a foreign leader in a totally inaccurate and fraudulent way. In addition, I want to meet not only my accuser who presented second and third hand information, but also the person who illegally gave this information. I don’t know what Trump means when he says, I have a right to meet my accuser because, no, no, you actually don’t. You never have a right to meet your accuser. You don’t have a right to sit down to a nice dinner with them, maybe sit down for a coffee. You have the right to face them in a court of law. If a criminal trial proceeds, that is what us law dictates. That is what us law requires. It does not say anything about getting to meet this person or even know their identity until your sitting in a court room across from them. Of course, in Donald Trump’s case, that court is not going to be an actual courtroom. It’s going to be the Senate chamber where an impeachment trial would actually take place. Yes. At that point, Donald Trump absolutely could face his accuser if we ever get to that point, but the fact of the matter is that this person is fearful for their life because of the president, because of his supporters, because of his followers, because of other Republicans out there, we’re dealing with not normal people. Basically. This person shouldn’t be afraid. This person should be heralded as a hero, not because they took down Donald Trump, or they might take down Donald Trump, but because they exposed government abuses and that’s what’s at the heart of this. We need to send a message to everybody in DC, Democrats and Republicans alike, that there’s still people out there willing to expose you when you do something wrong. That threat of exposure, that threat of prosecution is what keeps some of these more questionable members in line. If they think they can do what the president does, intimidate whistleblowers, threaten their life, then those whistleblowers are going to be a lot less likely to come forward in the future, and that’s going to allow for all kinds of corruption, the likes of which we have likely never seen in this country.