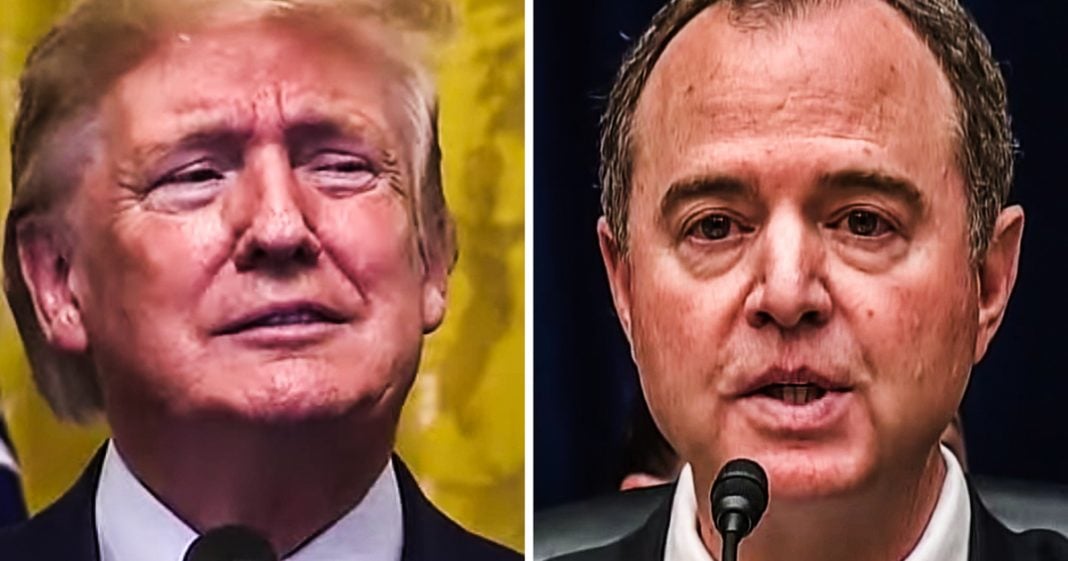 Donald Trump is growing increasingly more unhinged as the impeachment inquiry enters its SECOND WEEK, and he has now suggested on Twitter that Adam Schiff, the Democrat in charge of the House Intelligence Committee, should be arrested for treason for going after Trump. The man has lost what little bit of a mind he may have had, as Ring of Fire’s Farron Cousins explains.

*This transcript was generated by a third-party transcription software company, so please excuse any typos.
Uh, Donald Trump’s had a really busy a couple of days, I guess you could say on Twitter, uh, constantly tweeting out whether it’s attacks and threats against the whistle blower. Uh, tweeting out Fox news segments where he likes when the morons say nice things about him and say that he didn’t do anything wrong. Um, or just randomly tweeting out words like presidential harassment, the greatest scam in American history, which hunt Maga, and keep America great. But it was a tweet about Adam Schiff that really got the public’s attention. And here is this wheat representative Adam Schiff, illegally made up a fake and terrible statement, pretended it to be mine as the most important part of my call to the Ukrainian president and read it aloud to Congress and the American people. It bore no relationship to what I said on the call arrest for treason. Arrest for treason because Adam Schiff did a pretty weak impression of a mob boss while doing what he admitted was a parody of what happened between Donald Trump and the president of the Ukraine on that phone call. That’s what happened in case anybody’s not familiar with it. Last week, I think it was Thursday, maybe it was Friday, I don’t even care any more of the days are all running together. Uh, Adam Schiff, chairman of the house intelligence committee, uh, was talking to McGuire, the, uh, director of national intelligence and he used this mob voice. Again, very weird that he did this, but he’s like, let me just give you a bit of a parody of how I think this phone call went down. And then he did the voice from say, yeah, what’s going to happen is I’m going to send my guy over there, but it’s not just any guy. It’s the attorney general of the United States. Admittedly, probably a bad move by Schiff. Um, you didn’t need to do that. We didn’t need to hear your impressions. Nobody needed to hear my impression right there. But it’s a thing. It happened. Nobody got hurt. It’s okay. Except the president’s feelings did get hurt. The sensitive little snowflake that we have in the oval office was absolutely triggered by the fact that Adam Schiff called them out for doing what we all know at this point. He likely did. And now Trump wants Adam Schiff arrested for treason because he claims it was illegal for him to do that impression of a 1930s gangster on the floor of the house of the rep, a house of representatives. Wow. This guy’s nuts. And the worst part of this story is that he’s going to get more nuts. I mean, if that’s even possible, if Donald Trump even had a sliver of his brain before all of this, he’s lost it now. Like there’s nobody home. The hamster got off the wheel to get a drink and just never came back. That’s what’s happening inside the man’s brain right now, and he’s going to start lashing out more and more. He’s lashing out at Adam Schiff day before that, he lashed out at who he calls AOC plus three. Uh, he’s lashing out at Maxine Waters. He’s lashing out at the media. He’s lashing out at everybody before we know it. Everybody that you hold dear in your life is probably going to be called out by the president on Twitter saying that they did some kind of treason. I don’t know, maybe they shared a post on Facebook. Well, that’s treason according to this guy, everything’s treason. You criticize him. It’s treason. And he says that because he knows that we know what the punishment for treason is, and that’s exactly what he wants to happen to people like Adam Schiff. But I don’t care what your personal opinion is of Adam Schiff. I know a lot of people on the far left do not like Adam Schiff because he was hyperfocused on Russia. Um, and he did kind of make that his entire brand and it made him look silly. Some people, Harold him as a hero because he wouldn’t let the Russia story die. But at this point, none of that matters because that’s not what this particular story is about. It’s about the president of the United States accusing a sitting member of Congress of treason and calling for his arrest, all because he did a bad impression.