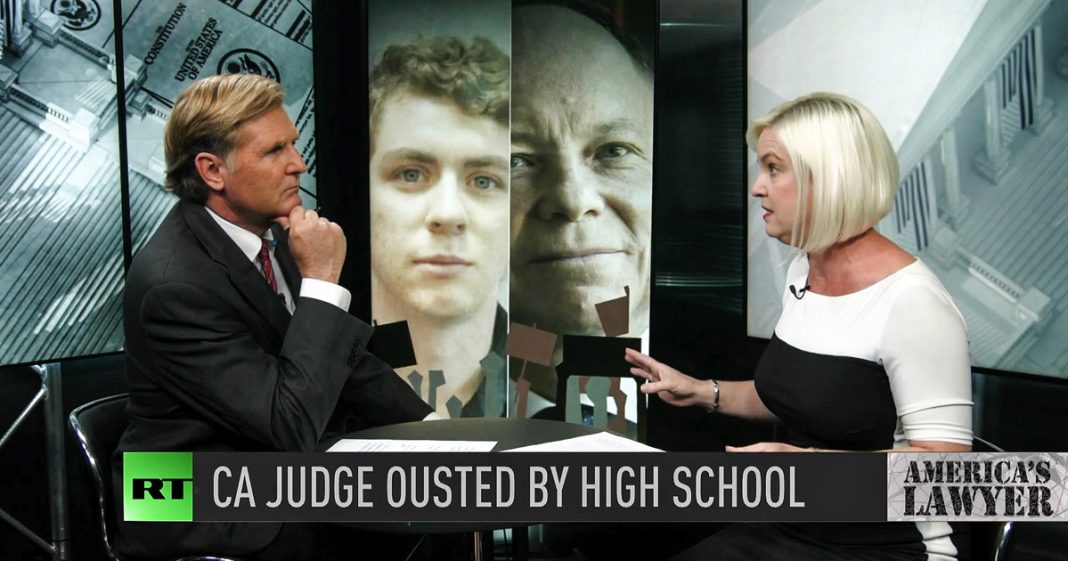 Via America’s Lawyer: Mike Papantonio is joined by legal journalist Mollye Barrows to discuss the recent firing of former California judge Aaron Persky from his coaching position for a high school tennis team. The firing stems from backlash associated with the former judge’s grossly light sentencing of Stanford swimmer Brock Turner for raping 22 year-old Chanel Miller behind a dumpster.

Mike Papantonio:             The sexual assault victim at the center of a high profile rape case involving a Stanford University swimmer is finally going public. And I want to talk about the case. Let’s, this, this is an ugly case.

Mike Papantonio:             This is one, it sounds like we’ve talked about this again and again over the last couple of years, but this is the case of Brock Turner and Brock was charged with rape.

Mollye Barrows:                Yes, it’s a fascinating case. So the victim in this case, which was several years ago, has finally come forward. She’s got a book about it and really it’s about class privilege in the criminal justice system and how she felt as a victim being impacted by that. But going back to what spawned all this, and that’s her attacker there, Brock Turner, who was on a swimming scholarship there at Stanford University, 19 years old at the time. He and the victim, her name is Chanel Miller, and at the time and the case, she was known as Emily DOE because she didn’t want her name to be public because of all the repercussions and the fallout of the victim shaming and just the embarrassment of the whole situation and what she felt like was ridiculed over this case.

Mollye Barrows:                Yes. They had attended the same party. He claimed they left together. She has no recollection of it and there’s plenty of evidence that, that has that, that would, that would substantiate her claim that she was not a willing participant in anything that he did after they left this party. And she, two other students found him assaulting her behind the dumpster and she was unconscious. He claimed that that was not what was going on, but she was unconscious. He tried to run. The two students, tackled him, called the cops, held until they got there. He denied that he did anything, but they did a sexual assault evidence kit and they found that there was enough evidence to charge him. And essentially when he went to trial, he was convicted on three charges of felony sexual assault.

Mike Papantonio:             He’s going to do this again, it’s just a matter of when. But judge Persky here thinks that he’s smarter or smarter than what the legislature says a person a judge should do when somebody’s convicted of a crime like this. Right?

Mollye Barrows:                Exactly. So with those three convictions on the felony sexual assault, he was facing up to 14 years in prison. Prosecutors were asking for six, but the judge, Aaron Persky, went with the probation departments recommendation and that he should have more of a minor jail time, if you will.

Mike Papantonio:             Let me tell you how that works. The probation department is so subject to outside influences coming in.

Mike Papantonio:             We know all the details we’ve seen, we know what he’s about and you should throw him in jail for six years.

Mike Papantonio:             I promise you it’s going to happen again. We’ll be reading, we’ll be talking about this story years from now in another iteration.

Mollye Barrows:                Yeah, so there was a huge public outcry once it became known that he had given this kid who had been convicted of sexually assaulting an unconscious 22 year old woman behind a dumpster. He said, you know, that sentence, I’m going to give you a sentence that to me is consistent with similar charges, considering how drunk you were, basically. So it was a, quite the public outcry.

Mollye Barrows:                And that’s what it, that’s the way the public certainly took it. And they voted him out of office just last year. In fact, he was the first one to basically be recalled from a bench by voters in more than 85 years in that particular part of California. So he since applied for a job as a tennis coach at a local high school for a girls junior varsity.

Mollye Barrows:                They hired him, he’d gone through the background check. They actually had him getting ready to start his job. And then the victim who had been known as Emily DOE or Jane DOE in the case before she came forward with her true name to talk about her experience that happened just this month. So as a result of basically the case being back in the headlines again, the school district became aware that this man was now working for them and they met with the parents and the teachers and they decided to fire him as a result.

Mike Papantonio:             And see anybody reporting a story like we’re talking about right now where we call out a judge and just because he’s a judge, that means nothing to me. A judge is just, you know, he’s just somebody who either got elected or appointed.

Mike Papantonio:             But you have to call these stories out and I’ll be darn if the, if the corporate media is willing to do this, the good judge Persky. What’s he doing now?